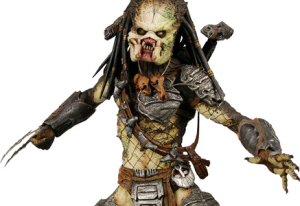 It’s a lot easier to see his missing tusk and the acid scars on his face but IMHO it looks a wee bit pale. I dunno if that is the actual paint or due to the photography. Either way, you can see the whole picture here. Thanks to Mark at NECA for the heads up.