AvPGalaxy is happy to give you all this exclusive first look at the cover, blurb and release date for John Shirley’s upcoming Aliens novel, Steel Egg: 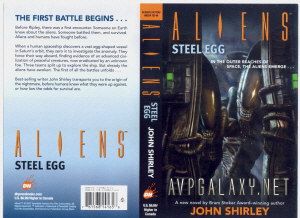 Before Ripley, there was a first encounter. Someone on Earth knew about the aliens. Someone battled them, and survived. Aliens and humans have fought before.

When a human spaceship discovers a vast egg-shaped vessel in Saturn’s orbit, they zero in to investigate the anomaly. They force their way aboard, finding evidence of an advanced civilization of peaceful creatures, now eradicated by an unknown foe. Three teams split up to explore the ship. But already the aliens have awoken. The first of all battles unfold…”

The novel is slated for an October 2007 release. If you have any questions regarding the novel, you can post in our Ask the Author thread.