Recently we reported on the upcoming April 2021 release of Aliens Omnibus 1 from Marvel. Kicking off the reprints of older Dark Horse titles had us impressed with its line up featuring a number of more rare comics which have never been previously collected.

In Marvel’s announcement, we saw the direct market cover featuring the original series artwork of Mark A. Nelson, with news that we’d be seeing the primary cover art for the volume by Marvel artist Greg Land sometime soon.

The artwork was shared on twitter exclusively from Near Mint Condition:

Exclusive first look! Get a sneak peek at not one but TWO covers for @Marvel #Aliens Omnibus! Standard edition cover art is from #GregLand and the Direct Market cover art is from #MarkANelson #Marvel #marvelomnibus #aliensomnibus #coverart pic.twitter.com/Nw5J2GOsfH

Having not been familiar with Greg Land’s work myself, I honestly thought the cover looked decent enough, until some concerning information started to surface on Twitter…

It’s become clear that Greg Land has ‘swiped’ (plagiarized) the cover using the artwork of one of the most celebrated Alien comic artists in recent years: Tristan Jones.

Been stewing on this all night: I’m 100% sure I’ve been Greg Landed.

His cover for Marvel’s upcoming omnibus + my drawings.

I saw this on IG and recognised the hands right away. Then the rest. Photoshop’s snap function even locked my work in when I put it over his

Community member SizzyBubbles noticed a similarity with the Alien egg in the piece as well. I checked it in Photoshop and sure enough, the lines matched up exactly. It’s the life-sized NECA Alien egg. 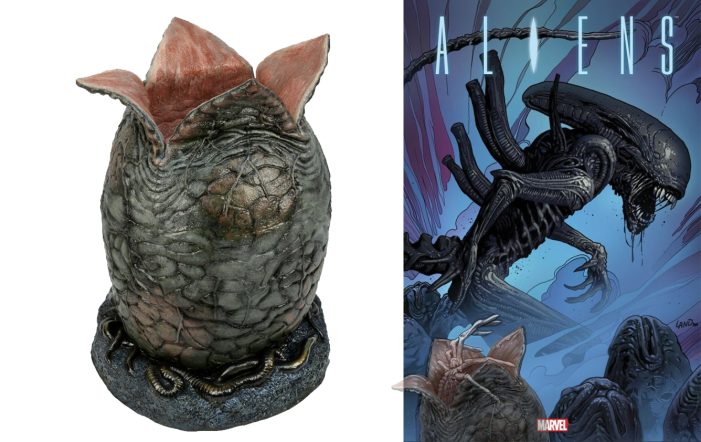 Negative sentiments on this copycat art have been making the rounds on Twitter, with solidarity for Jones shown from fellow industry artists.

Marvel should really hire @WallMeatJones Jones to do a bunch of Alien things. He is fantastic at it. He is technically doing Alien stuff for them though, just via another artist. This is not good. Pretty horrible swipe. Hope he donates some of his fee for the cover to Tristan… https://t.co/UcAO4zfax6

Follow the saga where they discover where each thing is taken from, the egg is the most recent discovery https://t.co/bcjHAbu57V

What a day for shitty art thief tracing huh? @marvel it is unacceptable that you continue to employ Greg Land. There are so many better artists who should be doing his job. https://t.co/TTy33EfBch

And those are just a select few. The fanbase isn’t particularly happy about this either. Greg Land has a controversial history in the comics industry, with his Wikipedia page introduction noting:

“Land has been criticized for the extent to which he relies on photographic reference for his art, and for his repetitive use of certain facial templates and poses when rendering characters.”

Fandom Wiki site Marvel Database describes his history as such:

Brian Cronin of Comic Book Resources remarked that Land’s art in Uncanny X-Men #510 is “possibly has the most harmful art to a story that I’ve seen in a comic,” saying that the Land’s limited supply of poses and use of the same models for multiple characters “results in terrible art and particularly terrible storytelling.”

Although the use of photographs as models is long established in comic book art, Land has been accused of going beyond the accepted bounds of photo use. Land’s layouts and poses were so distinctive, detailed and repetitive that critics suspected that Land was lifting photos into his pages outright and using minimal Photoshoping to alter the picture and make the work appear an original drawing. Land says that he does Google searches for references, but denies accusations that he does digital manipulations which has since been proven untrue by various factors on the Internet, who have taken his pictures and post them over posters, movie stills, porno images, his own work and other comic book art to showcase that he has traced them indefinitely.

There are currently a number of people who have petitions and groups dedicated to have him fired by Marvel, though Joe Quesada had stated that he wouldn’t fire him because it would be unfair to Land.

This is a misstep for Marvel with the Alien license, damaging what was increasingly good-will from fans after the impressive Omnibus line up announcement. The appropriate action in our view would be that this cover art be pulled and an apology is given to Tristan Jones. Here’s hoping this is the last we see of Land’s involvement with the Alien property for Marvel.