Writer Jon Spaihts has given a rare interview with the ScriptApart podcast about his work on 2012’s Prometheus. Spaihts most recently co-wrote 2021’s Dune which was very well-received but also re-wrote 2016’s Doctor Strange. He was the sole writer, however, on 2016’s Passengers  – the sci-fi romance starring Jennifer Lawrence.

Jon Spaihts was the original writer of Prometheus when it was a very much an Alien prequel. His script for Prometheus was rewritten after Damon Lindelof was hired to make it more of a stand-alone film without the focus on the Alien aspects and with more ambiguity. Spaihts had written quite a few drafts with varying titles – Alien: Engineers is the most well-known and the fourth draft can be found online.

It is now coming up to the Prometheus’s tenth anniversary and he spoke to the ScriptApart podcast. The podcast covers how Spaihts came aboard the project, what it was like working with director Ridley Scott, the characters and how the android David was created. He says that 20th Century Fox producers saw 2010’s Inception which is one of the reasons that led them to make the Alien prequel more autonomous.

Spaihts talks about what the plans were going to be for the Alien prequel trilogy. Weyland-Yutani was still going to be just Weyland but they were going to bring Yutani into the story. There was a war going on with the Engineers – “there would be good Angels and bad Angels” says Spaihts. 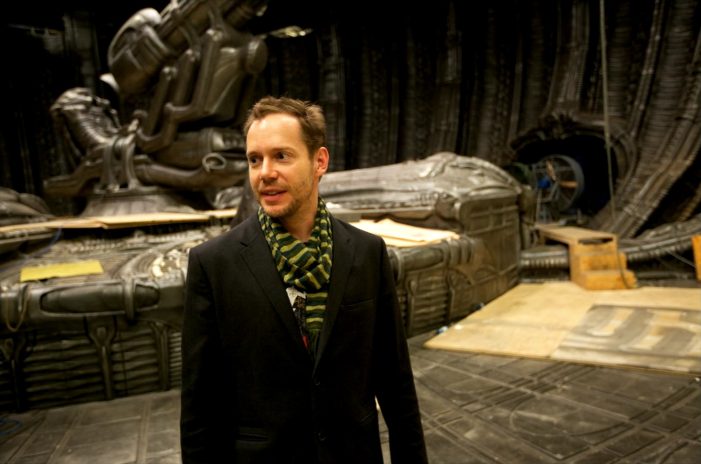 Jon Spaihts on the set of Prometheus.

The next Alien prequel was going to be more about a conflict between human factions. Yutani was going to have a very different agenda and there was going to be a man-in-the-middle story with Shaw. The prequels were planned but even if Fox decided not to press ahead with them, Alien: Engineers was supposed to end without a cliffhanger and the Engineer Spacecraft is meant to be the the Derelict Spacecraft that Ripley finds in Alien a few decades later.

It’s a very interesting interview. To learn more about Jon Spaiht’s Alien Engineer’s script and what changes Damon Lindelof made, Aaron wrote a detailed article about it a few years ago – Engineering Prometheus – From Jon Spaihts to Damon Lindelof.

You can also listen to AvPGalaxy Podcast #33 which is about the leaked Alien: Engineers script. There are two leaked scripts that are online. Alien: Engineers – this is the 4th draft and Alien 01: Genesis – the 5th draft but it is not the final Spaihts draft.

Thanks to skhellter for the news.