We have just uploaded our Alien: Engineers Podcast, the 33rd episode of the AvPGalaxy Podcast. The 33rd episode is our episode that takes a look at the earlier incarnations of Prometheus from when it was a straight-up Alien prequel. We walk through the early script by Jon Spaihts and discuss it in detail. 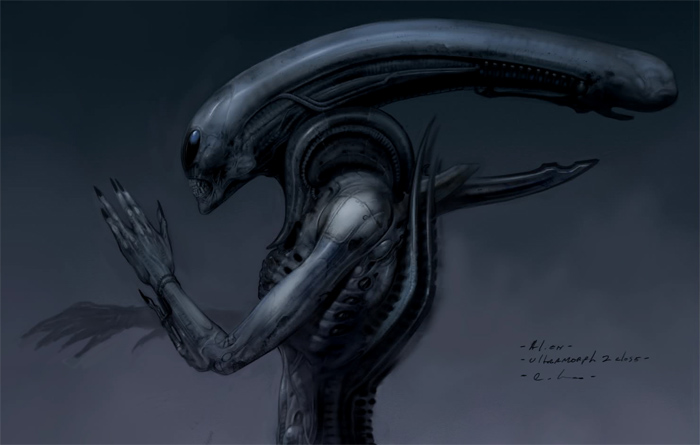 Our 33rd episode is the Alien: Engineers podcast where we discuss the earlier Prometheus scripts by Jon Spaiht’s. This concept art is of the Ultramorph from the end of the script.

RidgeTop, Xenomorphine and I are joined by special community guest, HuDaFuk. Regulars to the forum will recognize his name but for those who might not read the message boards, you will most likely recognize his work from Xenopedia, the AvP Wikia, where HuDa is an administrator.

This episode is a longer one, running at just under 2 and a half hours in length but we cover the Alien: Engineers script in some great detail. As well as summarizing the events of the script, we also offer our own thoughts, comparisons, and criticisms. If you’re interested in reading the script yourself you can find it in our downloads section (along with many other drafts of the various other Alien/vs/Predator films).

We’d love to hear what you think about our latest episode. Did you agree or disagree with our assessment of Alien: Engineers? Or perhaps you just have some comments you’d like to make? Feel free to let us know down below!