The battle between the original Predator creators Jim & John Thomas and Disney for ownership of the U.S. Predator copyright is heating up, and now there is a court date scheduled to decide if new Disney-era Predator content should be stopped until all the legal issues are resolved. 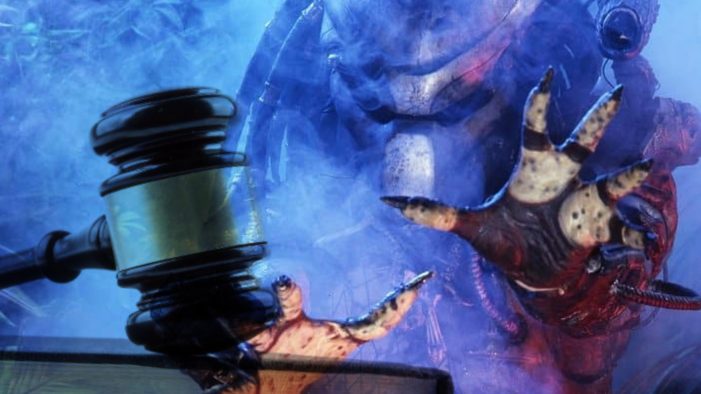 Thursday, the 27th of May will be a big day for Predator fans, because that is the day when a Motion Hearing will take place for a Preliminary Injunction.

If you recall in our last article, we assessed that the Thomas Brothers were trying to stop the new Disney era Predator film “Skulls” from going into production. This is because the legal representation for the Thomas Brothers indicated they are entitled to have the court issue a “preliminary injunction” on new Predator works, which is a temporary court order that would prevent Disney from continuing new Predator works until the conclusion of a trial.

Plaintiffs are entitled to a preliminary injunction, during the pendency of this action, and thereafter to a permanent injunction, pursuant to 28 U.S.C. § 2202, enjoining Defendants, their officers, agents and employees, and all persons acting in concert with them, from exploiting after April 17, 2021 (the effective termination date), new derivative works based on the Screenplay and derivative Predator film franchise, without first obtaining at arms’ length a new copyright license from Plaintiffs.

Well now it seems there is a Court Hearing scheduled for that very purpose. On May 27th, Magistrate Judge Laurel Beeler will hear both sides and decide if a preliminary injunction should go into effect.

Here are the Motion Hearing details:

Webinar Access: All counsel, members of the public, and media may access the webinar information at https://www.cand.uscourts.gov/lb

General Order 58. Persons granted access to court proceedings held by telephone or videoconference are reminded that photographing, recording, and rebroadcasting of court proceedings, including screenshots or other visual copying of a hearing, is absolutely prohibited.

It appears the public can virtually attend this hearing, but if you do, please remember recording as well as taking screenshots is not permitted.

So will the 27th of May be a dark day for Predator fans? Will our favorite intergalactic hunter be tied up in legal battles for years like the copyright battle for “Friday the 13th” with no new Predator content in sight?

Keep your targets set on Alien vs. Predator Galaxy to find out, and for all the latest Alien and Predator news. You can also follow us on Facebook, Twitter, Instagram and YouTube to get the latest on your social media walls. Be sure to join in with fellow Alien and Predator fans on our forums as well!