With many conventions and fandoms making the move to virtual conventions in this time of isolation, Aliens is not missing out on the fun either! Coolwaters Productions, the company that represents some of the cast of Aliens, has been running their own In-House convention with the casts of Superman, Ghostbusters and Star Trek having had live video panel events.

Now it’s Aliens time to shine! On the 13th of June (at 8pm GMT/12pm PST), Aliens’ veterans Carrie Henn, Cynthia Scott, Daniel Kash and Tom Woodruff Jr. will be taking to the computer screens to talk about their time on the film!

“They Mostly come out at night, mostly!” is our “ALIENS” themed event for Saturday JUNE 13th. A live 1.5-hour panel featuring all four of our celebrity guests will start at 12:00 NOON PST (USA). Join actors Carrie Henn (Newt), Tom Woodruff Jr. (Alien Creature), Daniel Kash (Prvt. Spunkmeyer) and Cynthia Scott (Crpl. Dietrich) as they discuss their careers both on the set of ALIENS as well as other films and or TV series they have been in. Every panel features EXCLUSIVE content never before seen at convention! Our events are hosted by Coolwaters’ president, Derek Maki, and fans watching are allowed to send questions to the panelists that will be answered LIVE on air (as time permits). Join us for a unique look into the lives of your favorite characters! The ability to buy solo video chats and autographs from ALL guests is also possible! 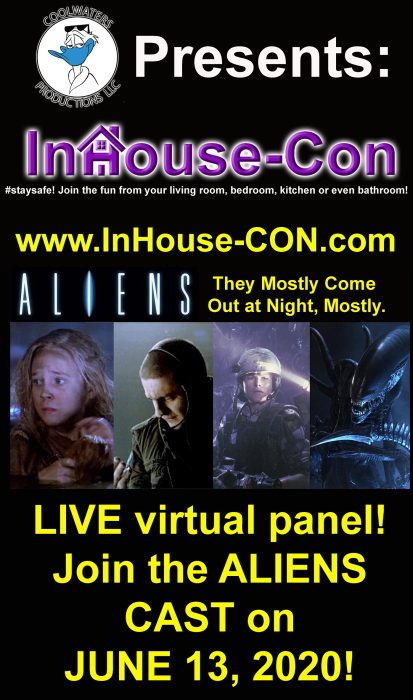 General admission, so to speak, is available for $3.99 which gives you access to the panel and Q&A session. You can also buy autographs from any of the guests, which will be shipped to you. An Ultimate Package is also available for $325 in which you get access to the panel and Q&A, but also a 20 minute video call with the panel, an autograph from everyone, a shoulder bag and 30% off a purchase for a future In-House event. Head on over to the In-House website to get your tickets!

Related News Posts
Watch The Entire Aliens In-House Convention...
Carrie Henn Returning to Aliens?
“The One That You Had Was a...
Comicpalooza 2016 Aliens 30th Anniversary...
Carrie Henn Joins In Search of Tomorrow, New...