First announced at the end of 2006, Obsidian’s Aliens: Crucible went through most of its production in quiet until it was officially cancelled 3 years later. Since then we’ve slowly learnt more and more about the first attempt to bring Alien in the RPG world.

Last year GVMERS produced an enlightening mini-documentary on the game and Josh Sawyer, Creative Director for Crucible, spoke candidly to IGN about the internal struggles faced at Obsidian.

Yesterday VG247 shared a new interview with Chris Avellone, the writer of Aliens: Crucible who spoke about the game, comparing it to Mass Effect but with a focus on maintaining the fear factor!

“Aliens: Crucible was really sad to see cancelled, but I don’t blame Sega for it,” writer Chris Avellone told VG247 during Reboot Develop. “It would be like – this is going to be really rough comparison – basically Mass Effect but more terrifying.

“We wanted to make it. But by that point Sega, I think, was… the publisher/management relations had gotten to a point where they were just tired of dealing with [Obsidian]. Everyone working on Aliens: Crucible was really excited about it. It was shaping up to be a really cool game. The prototype was really cool. But then Sega’s like ‘nope!’” 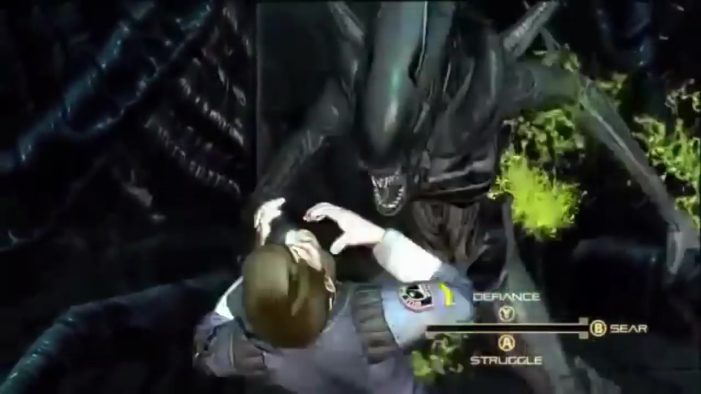 Crucible’s writer went on to explain how they tried to keep the fear going, making it possible for the Aliens to show up and interrupt you even while engaged in exchanges with other characters.

“The biggest challenge we had was how to keep the fear going even in conversations,” Avellone remembered. “You can make conversations stressful and frightening. How do you do it so that an alien could be attacking you at any moment? You can’t take shelter in a conversation with two talking heads while you try to figure out what to do.”

The game was a fair bit into development and featured conversations, combat, and even hacking. Much like Mass Effect, combat would be real-time with two AI characters supporting, and you could give them simple orders to get them to engage specific enemies or hunker down, for example. It’s easy to imagine how this would have worked in the Alien universe, since there are already plenty of established xenomorph variants, the enemies are durable and smart, and that acid blood is a ready-made status effect. 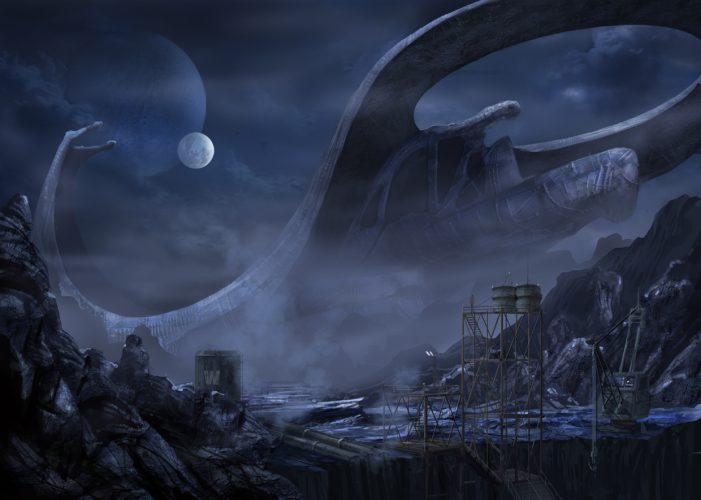 Concept art of a Space Jockey facility or craft.

Avellone also went into some more detail about Aliens: Crucible’s narrative,  explaining that everything went wrong for the planet after the discovery of a Space Jockey facility!

The RPG would have seen players flying to an alien planet where they’d find one of the ships or installations – like what they find in Prometheus – left behind by the Engineers, as well as a valley of creation and weapon testing facilities.

“But as you’re entering the atmosphere, [you realise] that this planet is incredibly unstable, so your entire crew gets blasted all over the planet,” Avellone explained. “And you land and the player, and some marines, and your squads, and scientists – and the weird thing is that when Prometheus came out, I saw some of the similarities, [and thought] ‘oh, we had a character like that’. But the entire world was more violent and there were a lot more Aliens running around. It was more a question of survival, and ‘how do we recover all the supplies, and desperately try to make a base?’ It was fun to set up.”

How do you feel about Aliens: Crucible? Are you disappointed it never saw release and Aliens remains outside of the RPG format? You can check out 13 minutes of gameplay footage below!