Screen Daily just shared an exclusive scoop that there’s a new Alien documentary on the way to celebrate the upcoming 40th anniversary of Alien next year. The new documentary, Memory – The Origins Of Alien, is apparently being shopped around at Toronto International Film Festival for worldwide distributors.

“Memory is, full-on, a mythological deep dive into one of the films that influenced me to become a filmmaker, and a long-overdue tribute to its creator and writer Dan O’Bannon,” said Philippe. “After the success of 78/52, we have pushed the envelope structurally, sonically, and visually, to deliver our most daring and original film-on-film to date; and I am thrilled to partner with Indie Sales to let it burst out onto the screen in 2019.”

According to the article, Memory – The Origins Of Alien will “reveal previously unseen materials from the archives of writer Dan O’Bannon and designer H.R. Giger, including story notes, drawings, designs, behind-the-scenes footage, and O’Bannon’s original 29-page Memory script from 1971.” 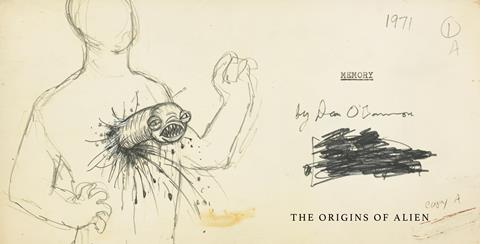 The documentary is the work of director Alexandre O. Philippe and producer Exhibit A Pictures who previously worked together on the Psycho documentary 78/52: Hitchcock’s Shower Scene.

Thanks to Sith_fire30 Creations for the news. Keep a close eye on Alien vs. Predator Galaxy for the latest Alien and Predator news! You can follow us on Facebook, Twitter and Instagram to get the latest on your social media walls. You can also join in with fellow Alien and Predator fans on our forums!