Late last year we learned of Memory – The Origins of Alien, a new documentary which will explore the development of the first Alien film! Entertainment Weekly brings us news of the documentary’s premiere and an exclusive look at the poster for the film: 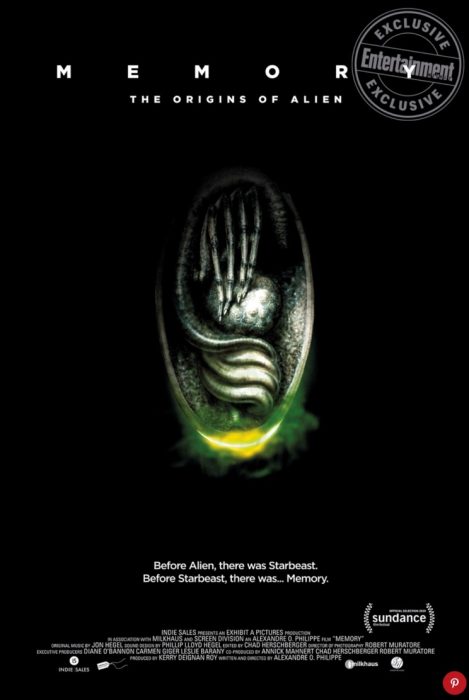 The documentary is directed by Alexandre O. Philippe, who is best known for his 2010 Star Wars documentary: The People vs. George Lucas. Memory seeks to focus on the work of Dan O’Bannon and H.R. Giger, exploring the early concepts and ideas of the film.

Set to debut at the Sundance Film Festival in Park City, Utah on January 24th, there is no wide release date yet but we can likely expect to see one later this year. The Festival program describes the documentary as follows:

“Memory was a script that Dan O’Bannon started in 1971, abruptly hitting a wall at page 29. But after the idea gestated for several years, it ultimately took the form of Ridley Scott’s masterpiece Alien.

Alexandre O. Philippe’s documentaries—most recently 78/52, about Hitchcock’s Psycho shower scene—have interrogated cinema’s cultural ripples. If MEMORY—The Origins of Alien were only a comprehensive account of Alien’s origins—ancient myths, comic books, H.P. Lovecraft, sci-fi movies, and parasitic wasps—it would still be fascinating. But how did Alien lodge itself so indelibly into our cultural imagination? Philippe’s real interest lies in the deep resonance of myths and our collective unconscious. The strange symbiotic collaboration between Alien creators O’Bannon, Scott, and H.R. Giger suggests a greater synchronicity across history, art, and storytelling, a synchronicity that gives us the Furies, creatures of Renaissance painting, and even chest-bursting aliens.

Propelled by a pure joy of cinema (and sociology), the film is strewn with unearthed archival material, designs, and story notes. It’s safe to say you’ll never think of Alien the same way again.”

It seems there are nearly endless stories to be told about the development and production of the original Alien. As also recently announced, we’ll also be getting a new comprehensive behind the scenes book of the film right before Alien Day on April 23rd.