As previously announced, the Alien-based virtual reality experience Alien: Descent opened its doors this week in The Outlets at Orange in Orange County, California. Developed by Pure Imagination Studios in partnership with FoxNext Destinations, the experience allows up to 4 players to battle Xenomorphs while investigating a distress signal on a Weyland-Yutani mining outpost.

It is a wireless experience but unfortunately, the technology behind it isn’t as revolutionary as we had hoped. It’s essentially based on Gear VR which is fairly limited in the graphics department when compared to the likes of PSVR, Oculus Rift and the HTC Vive. It’s equivalent to PS3-era graphics and it’s not far from the Aliens: Extermination arcade game that came out a decade ago.

That said, the experience is still really good and the virtual world is reflected extremely well in the real world. When you’re walking down a walkway in virtual reality, you can actually reach out and grab a railing that is there in the area. There are floor movements with wind and heat effects to fully immerse you. It really is one of the best virtual reality experiences there is in that regard. AvPGalaxy reader, El Diablo, was fortunate enough to visit The Outlets and give the experience a spin. Here’s his report: 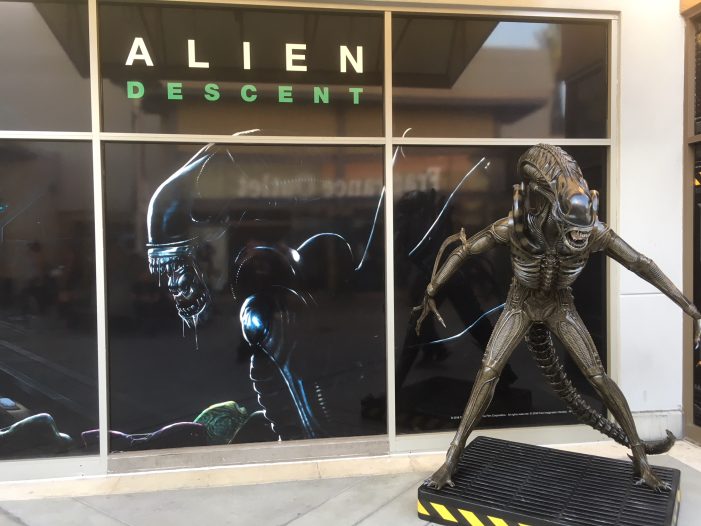 I had the opportunity this afternoon to check out ALIEN: DESCENT, the new VR experience located at The Outlets outdoor shopping center in the City of Orange, CA. It’s hard to miss this place since a full scale Xenomorph drone is standing guard at the entrance (a photo-op hit with passers by).

The facility itself is built to look like a Weyland-Yutani installation with boxes of ammunition stacked against the walls and a safety video demonstrating the proper use of the new EM41 Pulse Rifle playing in the background. The setup is that you are part of a squadron of marines sent on a rescue mission to a mining colony on planet LV-178. All communications have been lost since the colony encountered some kind of “infestation,” and now you and a partner get to suit up and launch down to the planet. 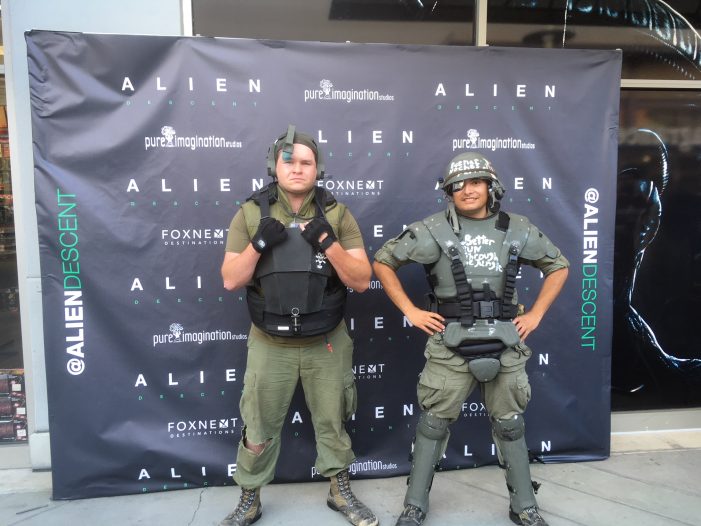 The whole set up is very elaborate with Weyland-Yutani technicians helping you gear up before entry. Once you’ve donned the VR headsets and sensors you’re fully immersed in a free roaming CG landscape, stepping out of your “cryotube” with your rifle in hand onto the mining facility platform. Or what’s left of it. The colony is seemingly abandoned and looks to have seen better days.

Directly above you is a giant moon or planetoid floating against the night sky, a nice little bit that sells the effect. You and your partner are then lowered via elevator to different sub levels, each more dangerous than the next. You encounter eggs and facehuggers, who then leap onto your platform before you shred them with pulse rifle fire. 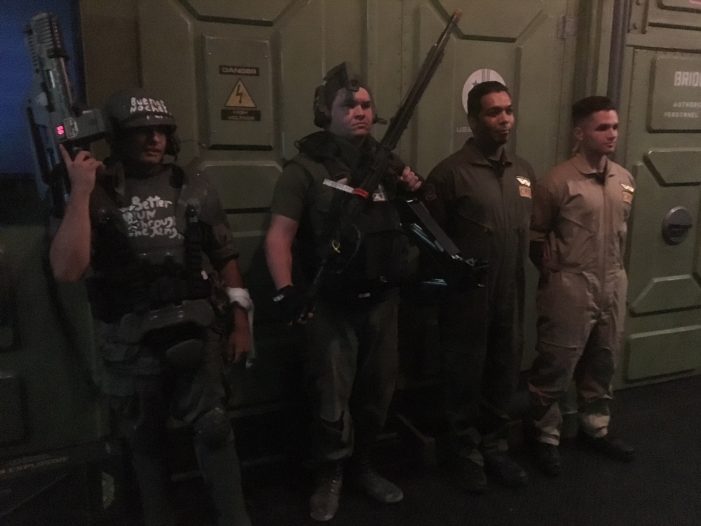 As you go deeper into what is now clearly a Xenomorph hive, you encounter what remains of the survivors before the Warrior Aliens attack, forcing a retreat as you blast the oncoming hordes crawling alongside you up the elevator shaft. It’s a virtual shooting gallery.. and it’s so much fun. I had an absolute blast at this event, which has a limited engagement here in California.

Speaking with the people who run ALIEN: DESCENT afterwards it was implied that this VR experience may eventually expand to other locations. I suppose it all depends on how successful this will be, but seeing the ALIEN property used in such an imaginative and interactive way is an absolute joy to behold. It’s been nearly 40 years since Ridley Scott’s original movie hit theaters and we’re still finding new ways to honor and celebrate it. If you’re a fan of the ALIEN franchise, you don’t want to miss this.