Just in time for Alien Day, 20th Century Fox have announced Alien: Descent – an Alien-themed virtual reality experience coming to a mall in California. The VR experience has been developed by Pure Imagination Studios in partnership with FoxNext Destinations. Unlike the PSVR, Oculus Rift and the HTC Vive, this experience is completely wire free so you can freely walk around on a stage for added immersion.

The premise is that you play a Colonial Marine, and you and your squad are tasked to investigate a distress signal on a Weyland-Yutani mining outpost. The outpost reported some sort of infestation just before communication was cut off so it’s down to you and three other players to eradicate the Xenomorph infestation, quarantine any survivors and get everyone off the world safely.

This is a 4-player experience and each player gets their own VR weapon and their movements in the environment are tracked with sensors on their arms and legs. 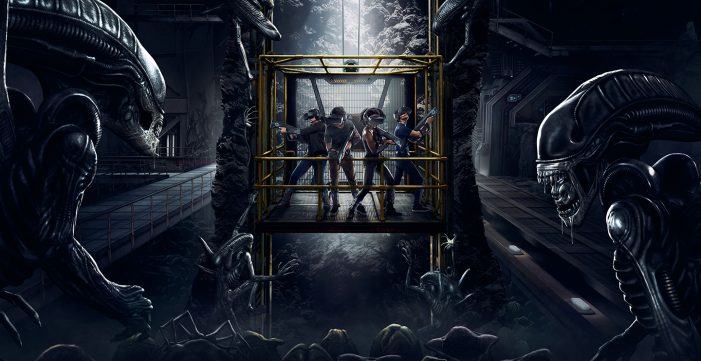 In addition, there will be environmental effects on the actual stage, motion platforms, and other surprises. Alien: Descent lasts about 15 minutes, and tickets are $22 per player. The virtual reality experience opens its doors in The Outlets at Orange in Orange County, California on April 26th. You can check out more details on the official Alien: Descent website. Does anybody happen to live nearby? Will you be checking this experience out on Alien Day?

Keep a close eye on Alien vs. Predator Galaxy for the latest Alien Day 2018 news! You can follow us on Facebook, Twitter and Instagram to get the latest on your social media walls. You can also join in with fellow Alien and Predator fans on our forums!