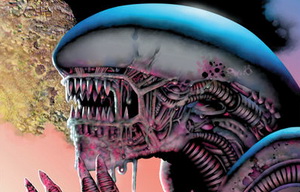 The comic will be released November 12, 2008. Check the profile for cover art and other details. Thanks to Space Disc Jockey for the news.