In a new interview with IndieWire, studioADI co-founder Alec Gillis has been talking about working on designing and constructing Prey’s Feral Predator. Though only alluded to briefly within the actual film, Alec spoke about how they thought about whether the Predator could have inspired the Comanche’s demon folklore.

“Dan brought parameters of likes and dislikes, and initially one of the notes said that he wanted this [Predator] to elicit more horror. So that got us talking about whether or not this could have been the origins of demonic spirits in the eyes of the Native people, such as the Wendigo. That influenced our thinking.”

While the Feral Predator’s unmasked appearance is causing some controversy within the fandom, Feral’s new mask is much more unanimously loved! Alec spoke about the thought behind the much loved mask, as well as explaining that Feral’s penchant for decorating with bone is present on the other technological parts of the costume.

“The idea was that he found some alien and he hollowed out his head, added the tech bits that control his laser sight and heat vision.

And then he had his high-tech pieces, and one of the interesting design elements was that we wanted to keep to the time. When he’s messing with gear on his arm, you’ll see bone inlay. That’s a reflection of the trophies being embedded in the technology.” 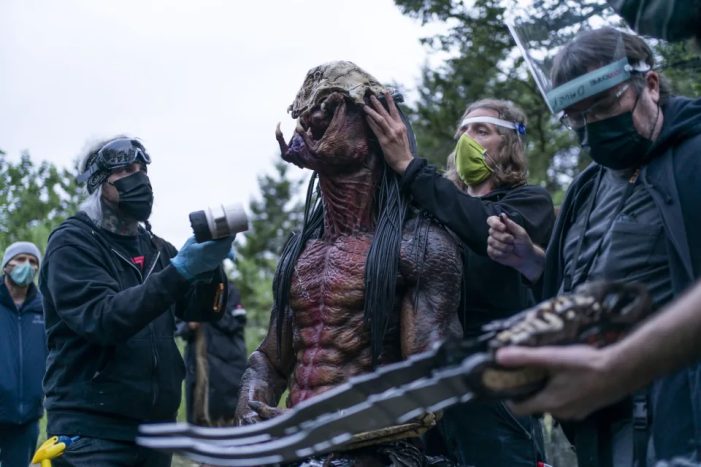 Alec also spoke about Feral’s less-advanced arsenal, revealing that Feral’s most advanced weaponry – the floating mines – were intended to be an earlier iteration of the Predator’s iconic weapon-of-last-resort.

“It wouldn’t be a fair fight [to have the plasma caster]. He did have the flechettes: the little floating land mines, which were intended to be little shrapnel bursts and were a precursor to his nuclear bomb on the wrist.”

Head on over to IndieWire to check out the rest of the article where they also spoke to Predator performer Dane DiLiegro who told the outlet that he thought that Feral had a “sense of hubris with him, lack of refinement. Maybe he’s younger.”

Alec Gillis also recently announced that he would be parting ways with studioADI, with his co-founder Tom Woodruff Jr. pursuing his career with writer, director and producer. Gillis is instead forming studioGillis where he will continue to work on “Creature Characters, Make up FX, Specialty Props and Costumes, Art Projects and everything else you know me for.” We’re currently awaiting news on what this means for studioADI.