While we’ve been seeing a lot of behind-the-scenes pictures and videos of Prey following the films release, we’ve been waiting patiently the concept art to start dropping so we can see some of the directions that were explored in the development of Dan Trachtenberg’s amazingly successful Prey! And now the time has come!

Alec Gillis, formerly of StudioADI, kicked things off with these concepts for what is now becoming a very iconic mask.

The Feral Predator’s bone mask was a notion that PREY director @dannytrs thought would make for a nice variation on the traditional Predator bio mask. @tom_woodruffjr and I had the pleasure of art directing an amazing team of concept artists including @michael_vincent_art , @farzad_varahramyan , @jfields217 , @the_justice_joseph

Swipe for earlier iterations, including an internally illuminated bone mask. Swipe further to meet the Crucifix Fish. I’ve been trying to find a place for this beauty in a design for years! It had its day here.

The Bone mask started as a cool 3D sculpt by @michael_vincent_art , then molded by @h2originals , a clay copy created, then detailed by sculptors Joey Orosco, @andy_bergholtz and @savannahsuderman 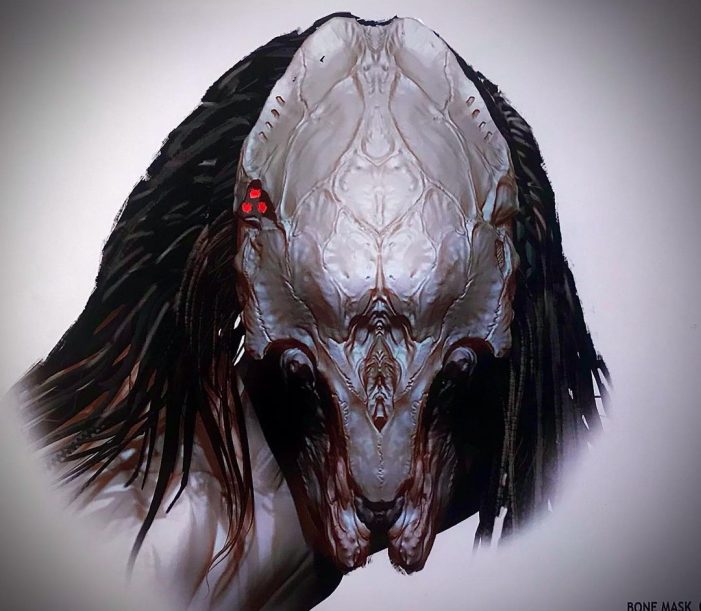 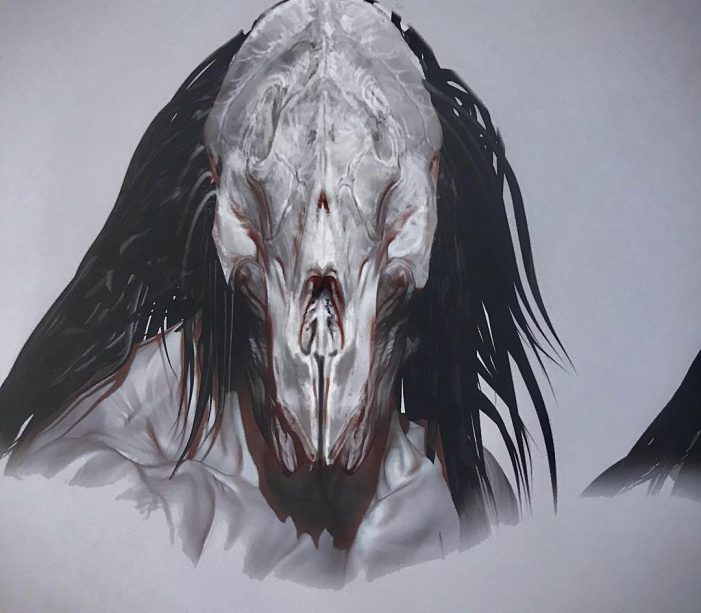 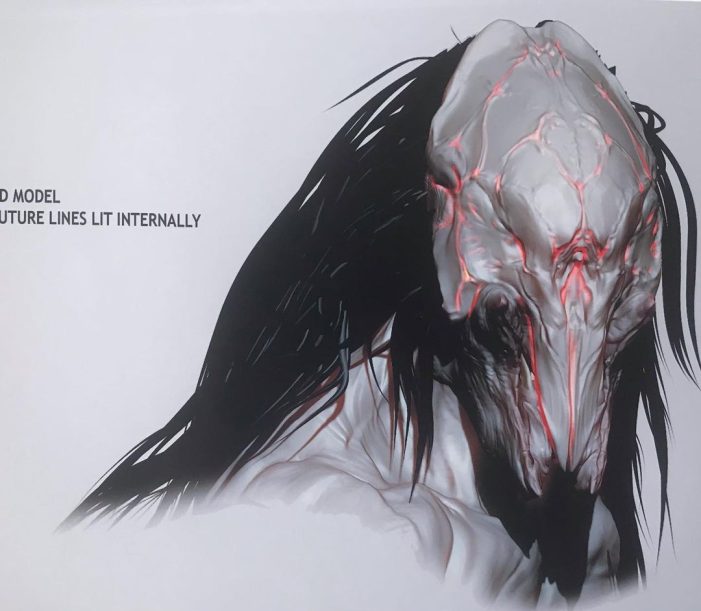 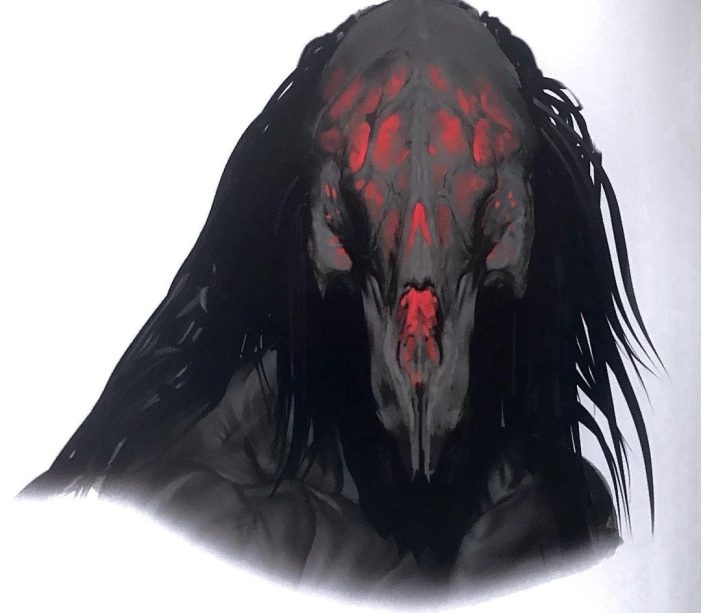 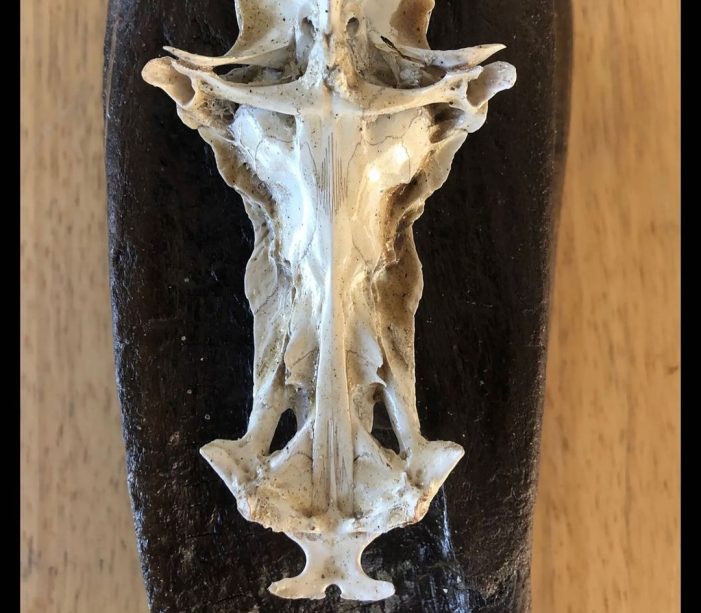 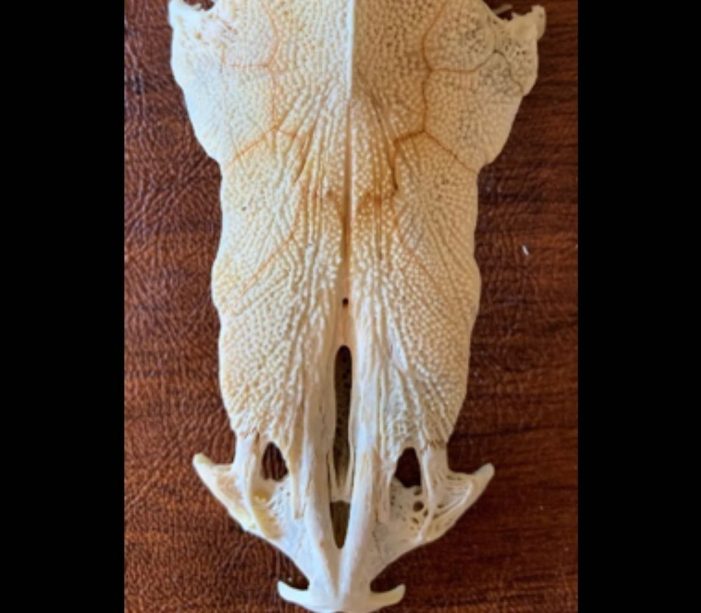 Though the mask illumination wasn’t actually seen in the finished film, another post from Alec demonstrated that the masks used in production all had the capability! Alec also shared a post with concept artwork of Feral’s unmasked face by creature designer Michael Vincent.

We’ve worked with Michael on a few projects and I always have a blast with him. I’ve always loved biologically plausible creatures so any concept artist who enjoys talking about viper sensor pits and secondary faces hidden in plain sight on tigers is okay by me.

Don’t get me started on communicating through pheromones or the difference between squid tentacles and arms. Chemotactility? Not a topic for polite conversation. Thanks to @dannytrs for letting us run feral on this one. 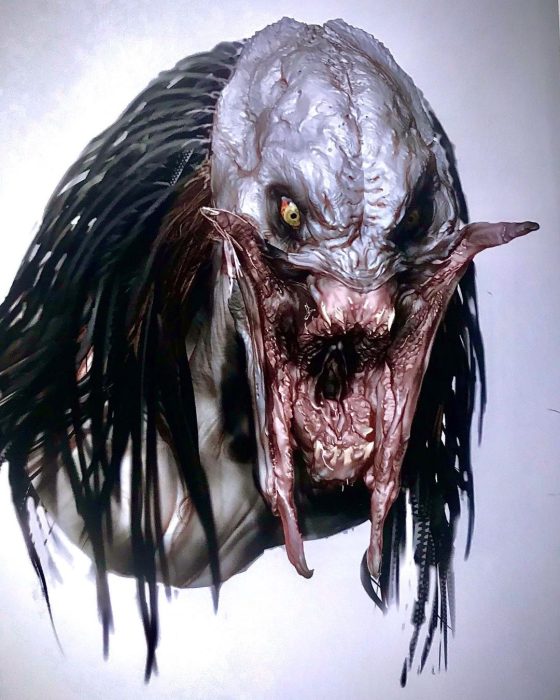 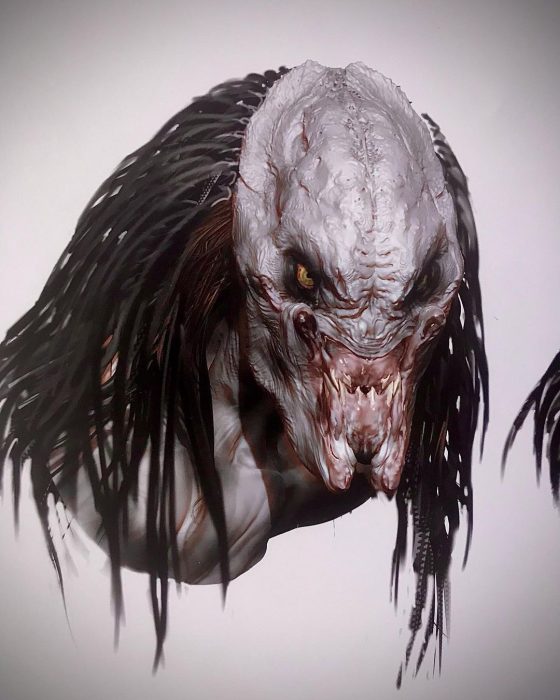 Michael Vincent, who also previously worked with ADI designing the Predator Dogs and hybrid creatures for The Predator, took to Twitter to share more concept art of the Feral Predator’s unmasked appearance along with commentary on the design process!

When the creature design and armor elements were approved, we made some images to pitch the idea of putting the performer’s head underneath the creature’s, yielding a more arched, animalistic posture for a “wilder” character… I was elated when they went this route…

By the way I should specify, we were holding off on color design still, so he is zbrush-colored with markings here and there…Though admittedly the grey was starting to grow on me heheh… Tom Woodruff had a sick idea for a “Grey Ghost” Predator variant… 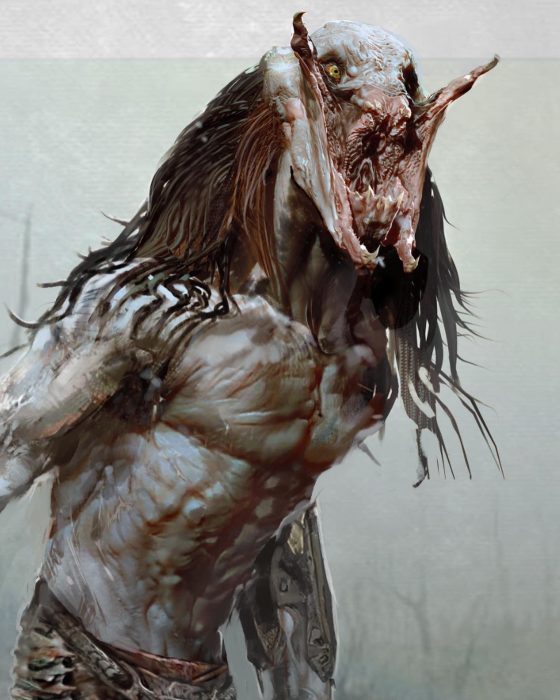 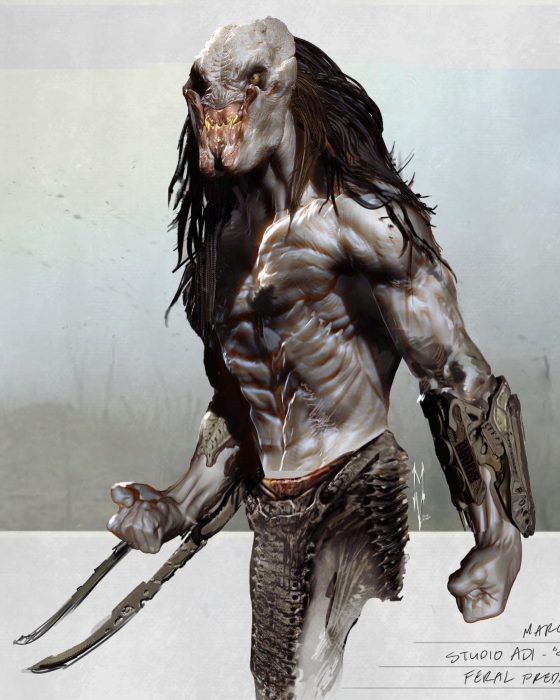 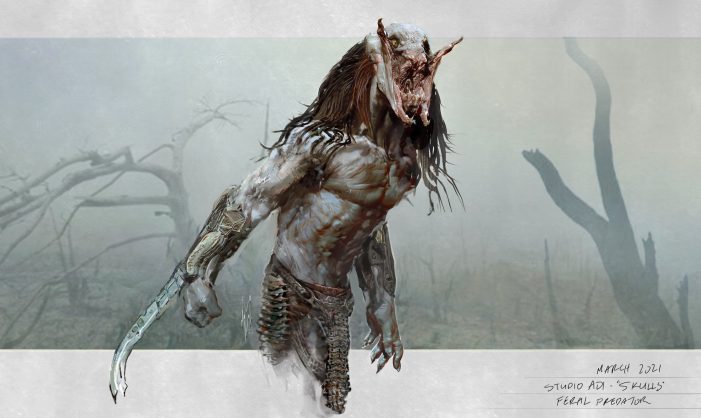 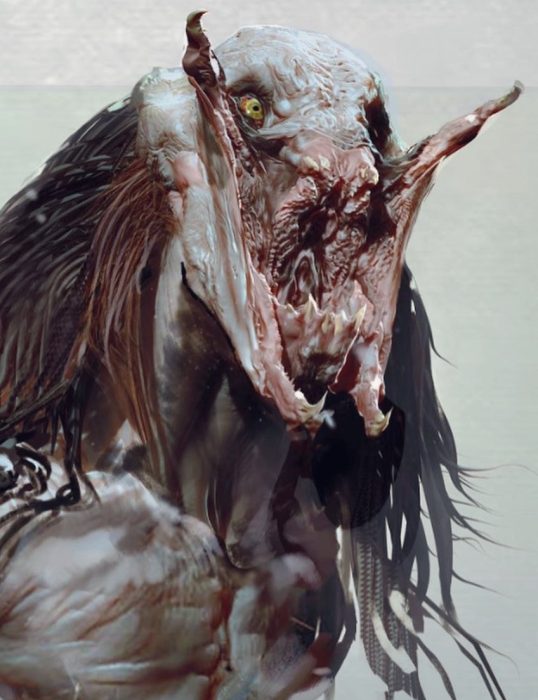 Further elaborating to a fan when asked about the sub-species comment, Vincent remarked that:

I don’t say eugenics to suggest Feral is a genetically edited predator which was not the plan… only to say that if they are self-selecting for different traits, it could yield the same diversity you may see between a mastiff and a Doberman, which lie cozily in the same species

Farzad Varahramyan, another artist who has worked with ADI previously on both Alien vs. Predators, has shared this piece – his first design for the film.

My first post after years and I couldn’t be prouder that it’s for PREY. A great pleasure to work with @tom_woodruffjr & @alec_gillis at StudioADI yet again, on director @dannytrs PREY.
I was hired to do some initial whole character sketch explorations and that evolved into detailed armor and weapon design explorations.

This is my very first design sketch. The direction was this is a more primitive feral Predator. Earlier versions of familiar weapons, new weapons. A period piece, Predator vs cunning Native Americans 300 yrs a go. The mood initially was more horror than monster.

So my first take tried to take all that into account. I suggested thinner stringier dreads, almost like the over grown hair of a recluse serial killer. The mask was more hand made, the concept of a drip metal mask (I’ll explain that in a later post), and far less armor.

And lastly – for now! – we have these concept designs by Justice Joseph for the Feral Predator’s speargun – referred to by Alec Gillis as the Bolt Gun!

Feral Predator’s Bolt Gun is the pre cursor to the Plasma Canon. The idea was to de evolve both the physiognomy and weaponry of this Pred. Tech that is more angular and not energy based. Of course it still needed the sci fi aspect so our job was to find the balance. 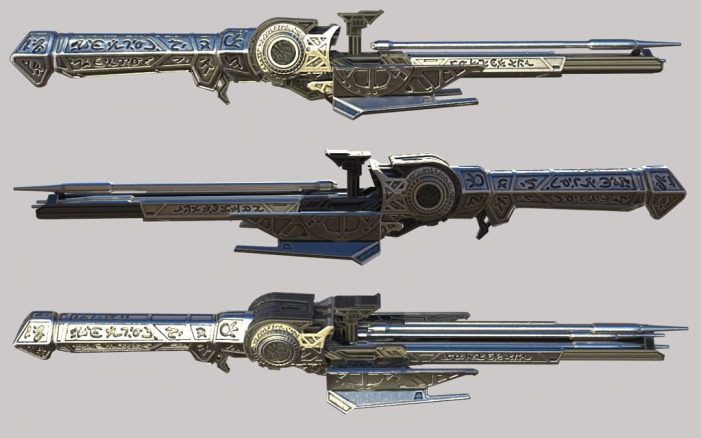