“The Mortal Kombat X Kombat Pack 2 Gameplay Trailer showcases the Kombatants being introduced to the game’s playable roster in 2016 including the Xenomorph from Alien, Leatherface, Triborg and Bo’ Rai Cho.”

The trailer shows some of the Alien’s moves and abilities which include calling in an egg, facehugger and additional Aliens. It also shows off the Alien headbiting an opposing character and some of those armblades that the Alien seems to have inherited from its host, Baraka.

All 3 variations of the Alien skin can be seen in this trailer. You can see a smooth head, a ridged head and some sort of crest-type head. They all seem to have the arm blades, stocky build though and shorter head as well. 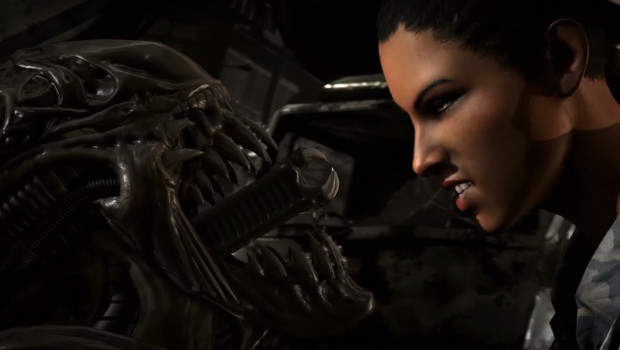 The Alien is one of four characters to be included in this newest downloadable content pack. The other new characters include Texas Chainsaw Massacre’s Leatherface, Bo Rai Cho, and Tri-Borg. There is no specific news of a release date other than the first quarter of 2016.