Jamie Warr over at the Weyland-Yutani Bulletin on Facebook has posted up some gems sent from Dave Dorman about an unreleased interactive game that was in development for a short period of 6 months:

“I was called in by Mike Richardson (head of Dark Horse Comics) in the summer of 1992 to produce production designs and physical art for an Alien DVD [Dave has since commented that he misremembered and it was CD-I format, not DVD) game produced by Dark Horse in collaboration with Total Vision. The game company was to be called Dark Division Interactive. Alien was to be their first game. Now remember this is 1992, before Xbox, PlayStation, or Game Box. I believe only Atari had a popular working game machine at the time. What Dark Vision wanted to was utilize the potential game playing power of the DVD player. Using the DVD hand controller and its buttons and cursor to move through the game and execute commands.” 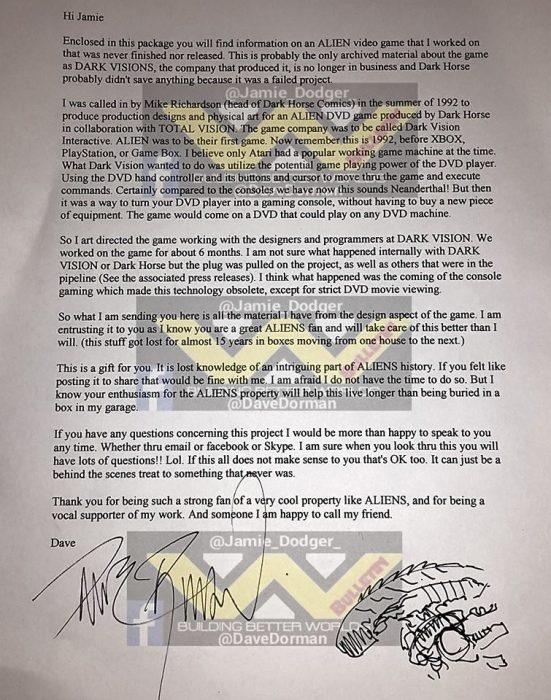 Dave Dorman would have overseen the design aspects of the game. Games of a similar nature did indeed appear for the DVD players. The content provided to Jamie doesn’t reveal many details on the actual storylines. You would have chosen between 2 characters/stories, one of which was “crew-story” and an “explorer” storyline. One would have been a fast-paced approach whilst the other was “more educational”. The idea was that it would have been a complex story driven venture.

You can find more art and a little bit about the game over at Xenopedia. Prior to this an “interactive comic” game was released for Aliens, simply titled Aliens – A Comic Book Adventure. You can find an entire gameplay video on YouTube. I have included everything Jamie posted down below and Jamie will be relying any questions for Dave about the project.

Related News Posts
Alien: Offworld Colony Simulator – An...
USCSS Nostromo – Alien: The Board...
The Making of Alien: Resurrection –...
Alien vs Predator The Miniatures Game...
New Aliens Board Game On The Way! Another...