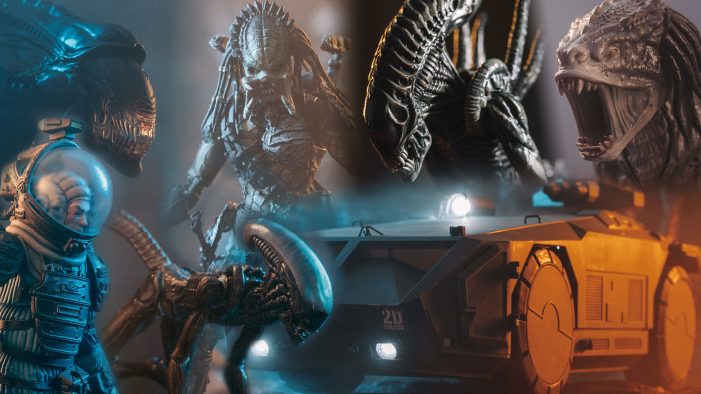 1:18 scale figure company Hiya Toys isn’t slowing down and continues to announce new pre-orders for upcoming waves of Alien, Predator, and AVP figures. They still have a number releases set for this year, and their ‘Exquisite Mini’ 2022 slate has been expanding.

When we last checked in during spring, they had just announced Predator Jungle Hunter Predator (Ver.2), Wolf Predator, Aliens Egg & Facehugger Set, Dallas, and Kane, which are all still scheduled for release before this year’s end.

Recently we’ve been seeing more of their Predators figures hit the market, as well as a reissuing of their previously sold out Alien: Covenant Xenomorph and Neomorph figures.

But there are still quite a few announcements that we haven’t reported on, so here are a number of solicitations, pricing, and galleries for figures you can expect through this year and into next:

From Hiya Toys. A PREVIEWS Exclusive! She’s faced down the xenomorph threat twice. But now Ellen Ripley has entered her most threatening environment yet: stranded on a decrepit prison planet with the galaxy’s most antisocial criminals as company. Hiya Toys presents its second design from 1992’s Alien 3. The Dog Alien was conceived by director David Fincher to be quadrapedal, “more of a puma, or a beast” than the previous styles from Alien and Aliens. Designed by Tom Woodruff Jr. and Alec Gillis, the Dog Alien features a more slender, animalistic look that perfectly suits the darker tone of the third film in the Alien series. This 1/18 scale figure stands around 4″ tall and comes with a special stand.

From Hiya Toys. A PREVIEWS Exclusive! Two hundred years have passed since Ellen Ripley died on Fiorina 161. Of 20 Xenomorphs initially bred by Dr. Wren’s science team on board the USM Auriga, Hiya Toys presents this figure of the Cloned Queen’s most loyal and valued servant from Alien Ressurection! this 1/18 scale figure stands approximately 5″ tall and comes with stand for ease in posing.

From Hiya Toys. A PREVIEWS Exclusive! In space, no one can hear you scream! Hiya Toys presents the white spacesuit worn by Ripley during the closing scenes of Ridley Scott’s 1979 Alien movie in 1/18 scale! This 1/18 scale figure stands approximately 4″ tall and comes complete with a blaster accessory.

From Hiya Toys. A PREVIEWS Exclusive! Hiya Toys returns with a new deco for an old favorite! The middle of the three brothers, Chopper got distracted by the humans and failed to slay any Xenomorphs during the ritual hunt, so was quickly ambushed and killed by Grid. this Invisible Chopper Predator features a clear molding to simulate this hunter in stealth mode. This 1/18 scale figure stands approximately 4″ tall and comes complete with the extended wristblades on both hands, and two special short spears with skull.

From Hiya Toys. A PREVIEWS Exclusive! From the outer reaches of space to the small-town streets of suburbia, the hunt comes home in Shane Black’s explosive reinvention of the Predator series. From The Predator 2018 Hiya Toys presents the Predator Hounds! Chimeric canines created through hybridization techniques, now you can have your own pair of Predator Hounds with these 1/18 scale figures! Standing approximately 2.4″ tall, the figures come with two different designs of lower jaw mouths, and can stand on their own for posing!

A PREVIEWS Exclusive! Every hive has its queen, and now Hiya Toys presents its version of the iconic Stan Winston design for the Alien Queen! This royal 1/18 scale figure features a new head sculpt and body details replicating the mix of practical effects, puppetry, and CGI in ADI’s AvP Alien Queen design. Standing about 7″ tall and stretching to 10″ long, the Alien Queen looms over all other figures! The Alien Queen also comes with a sturdy stand for ease in posing.

Every hive has its queen, and now Hiya Toys presents its version of the iconic Stan Winston design for the Alien Queen! This royal 1/18-scale figure features a new head sculpt and body details replicating the mix of practical effects, puppetry, and CGI in ADI’s Alien vs Predator Alien Queen design.

After a fierce battle, Lex and Scar defeat the Queen by chaining her to an oil vat and tipping it into the Antarctic Ocean, where it drags the Queen into the depths. Now Hiya Toys presents its version of the battle scene. Standing about 7 inches tall, this Previews Exclusive Alien Queen features Battle Damage painting.

A PREVIEWS Exclusive. She’ll breed. You’ll die. The result of a 10-year project conducted by the USM to recreate the Xenomorph XX121 species for use as a biological weapon, this Cloned Queen is a terrifying sight! This 1/18 scale figure features amazing detail at a small scale. Standing about 7″ tall, this PREVIEWS Exclusive Cloned Queen will make a great addition to any Alien collection!

A PREVIEWS Exclusive. Accomplished Xenomorph hunter and elite-ranked Yautja who has tested himself against countless quarries and come back with the trophies to prove it, Wolf, now joins your collection in an unmasked version. Hiya Toys debuts this elite hunter with unmasked Ferocious face 1/18 scale figure that stands over 4.5″ tall. With many accessories, it also includes a stand for ease in posing.

A PREVIEWS Exclusive! The Xeno Warrior: adult form of the Chestburster and soldiers for the Alien Queen! These creatures are known for their potent acidic blood and their pharyngeal jaws, with which their offspring are implanted inside living hosts.  In Aliens vs. Predator: Requiem they follow with the Predalien who is battling with Wolf Predator before erupting violently from their chests! This fully-posable 1/18-scale PREVIEWS Excusive figure of the Xeno Warrior stands approximately 4.7″ tall.

A PREVIEWS Exclusive! The hero Yautja from 2007’s Alien Vs. Predator 2: Requiem, named Wolf for the “fixer” character from Pulp Fiction, is of elite rank and is marked by his scarred face and missing tusk. Now, Hiya Toys debuts this heavily-armed hunter’s Invisible version with this 1/18 scale figure derived from ADI’s design! Wolf stands about 4.5″ tall and features many accessories standard to Predators, including wristblades, plasmacaster, and shruiken. But it’s Wolf’s whip and handmade plasma pistol that set him apart from the pack! Wolf also comes with multiple hands, as well as a pegged stand for ease in posing.

A PREVIEWS Exclusive! In 2004, industrialist Charles Bishop Weyland sends a group of explorers to investigate a mysterious Antarctic pyramid, but discover they’ve entered a Yautja hunting ground. Now caught between a trio of Hunters and a host of xenomorphs, the team must find a way to escape…or risk becoming prey or trophy! Now Hiya Toys presents the Thermal Vision Alien Warrior that looks just like the predator’s sight of vision! This figure captures the creatures iconic look with a fully poseable body and detailed paintwork in a 1/18 scale!

A PREVIEWS Exclusive! One of the three crewmembers chosen to explore LV-426, Lambert eventually stumbles across a derelict spacecraft. When they discovered the remains of the Space Jockey, Lambert wondered aloud what happened to the other members of the crew. Now, Hiya Toys has created this blue spacesuit version Lambert from the movie before she was taken away by the Alien to be a host! This 1/18 scale figure stands approximately 4.3″ tall and comes complete with a blaster accessory.

A PREVIEWS Exclusive! Thomas Kane, the executive officer aboard the commercial towing vehicle USCSS Nostromo, was serving on the ship during its fateful voyage in 2122 when it encountered a Xenomorph! Now, Hiya Toys presents this spacesuit version of Kane from the movie before he was attacked and impregnated by a Facehugger. This 1/18-scale figure stands approximately 4.3″ tall and comes complete with a blaster accessory.

In space, no one can hear you scream! Hiya Toys has revisited its 2020 Alien: Covenant Alien Egg and Facehugger set with an all-new paint deco, derived from the look from the original 1979 Alien film! Originally designed by H.R. Giger in his signature biomechanical style, and sculpted in 1/18 scale, this set features six ovomorphs (xenomorphs eggs) in various stages of release, as well as three facehuggers, ready to infect their prey!

In Yautja culture, the Elder Predators are those warriors whose exploits set them apart from both Blooded and Elite warriors. They mentor the Young Bloods within a clan, and choose which planets on which a hunt is to take place. It was an Elder Predator, otherwise known as an Ancient, that watches the events unfold on Bouvet Island, and presented Lex Woods with his own combistick to honor her fight alongside Scar. Joined by a new “invisible” look for the Scar Predator, these 1/18-scale figures based on AVP: Alien vs. Predator stand approximately 4″ tall and also feature a pegged stand for posing.

In celebration of Aliens 35th Anniversary, retailer GameStop also has a few Hiya exclusives on the way, including an Aliens Alien Warrior (Green), and a reissue of the Power Loader, which was originally part of their Aliens: Colonial Marines line.

A lone survivor, floating through space. A distress call from a distant colony. A group of battlehardened marines, full of confidence and loaded for bear. Yet no one can be prepared for what awaits them on LV-426. This time, it’s war! Hiya Toys debuts its newest Exquisite Mini from the iconic 1986 sequel, Aliens, with an exclusive, green-tinted version of the Alien Warrior. This design, conceived by director James Cameron and executed by master designer Stan Winston, represents a more-warlike evolution of the original H.R. Giger design. Its ridged carapace and readapted body allowed for more aggressive movement, and a more dynamic figure than the “Big Chap”. Hiya’s version features a highly articulated body, a screen-accurate sculpt, and a moveable inner pharyngeal jaw. This release also features an  green paint deco, bridging the original “Big Chap” paint job with that of the 1986 design, as well as special packaging as part of this exclusive capsule for GameStop. With its stand and two sets of hands, this 1:18 scale figure (app. 4” tall) is ready for war.

A lone survivor, floating through space. A distress call from a distant colony. A group of battle-hardened marines, full of confidence and loaded for bear. Yet no one can be prepared for what awaits them on LV-426. This time, it’s war! Hiya Toys’ P-5000 Powered Work Loader was originally released in 2018 as part of its Aliens: Colonial Marines capsule. When they saw that the now sold-out vehicle was commanding hundreds of dollars in the secondary market, they knew it was the perfect time to tweak and revisit this film icon. Don’t call it a simple reissue: the Aliens Power Loader is exclusive to GameStop for their fall 2021 capsule. This 6.69″/170mm vehicle features an all-new, film and prop accurate paint deco, as well as packaging exclusive to GameStop. Best of all: this Power Loader can be piloted by any 3 3/4″ – 4″ figure, be it human, Yatuja, metahuman, or otherwise! Class 2 license not included.

There are quite a few interesting and impressive looking figures in the lineup, personally I’m happy to see a new AVP Queen Alien, as I don’t think another company has produced figures of her since the McFarlane days. Hiya keeps on expanding into seemingly all of the films, with new Aliens vs. Predator: Requiem, Alien: Resurrection, and The Predator figures coming.

Big Bad Toy Store and Entertainment Earth currently have pre-orders available, as well as a number of recent releases in stock. Or you can check with your local comic shop. You may have noticed ‘PX’ or ‘Previews Exclusive’ in the descriptions, which referrers to Diamond Comic Distribution’s retail catalog. This means you’re more likely to find these figures in local comic shops rather than large retail chains. We’ll be keeping an eye out for any more new wave announcements in the near future.

Thanks to Toyark for the news.