For the last 13 years the UK Games Expo has been operating out of Birmingham where it brings publishers, exhibitors, retailers and hobby gamers together to check out new tabletop games coming out and to compete at existing games.

I’ve only attended the UKGE twice in the past, competing in Star Trek: Attack Wing tournaments, since most games tends to skew more towards the fantasy side of things and I have no interest in that genre. Give me alien nasties and future guns and I’ll be there! So when I heard Free League was going to be demoing their upcoming Alien: The Roleplaying Game this year, you could be damn sure I booked myself a ticket and went down to give the game a go!

While I really enjoy tabletop gaming (and Alien/Predator has been knocking it out the park these last few years), I’ve never been able to get into roleplaying games and that is primarily because most of them are fantasy. I’ve tried a few sessions of Dungeons and Dragons and I’ve done one Star Trek: Adventures mission but I just couldn’t get on with them.

So I’m very inexperienced when it comes to roleplaying but ever since this was announced I was determined to give Free League’s Alien: The Roleplaying Game an honest go! I’ve already pre-ordered the game and am eager to get my first playthrough of Chariot of the Gods, the first cinematic scenario. Something I truly love about the upcoming game is how it’s split into campaign and cinematic modes, with the cinematic mode seeming like it was tailor-made for fans like me with little RPG experience but very keen to get involved!

Along with my buddy Shevvie (listeners of the AvP Galaxy Podcast should recognize the name) we picked up our tickets on the Friday morning and rushed down to the Free League booth to get ourselves booked into a session. We were relatively early and still had to wait until the afternoon to get our slot. The demo proved pretty popular, as by the time we arrived for our own demo it was booked out until the Sunday, and then completely booked up by the Saturday morning. 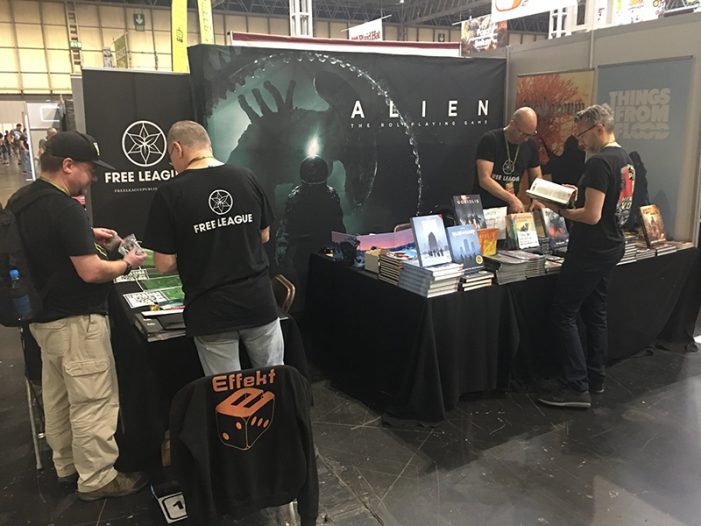 The demo sessions were hosted by Free League’s friends from the Effekt Podcast, who not only ran the demos but wrote a UK Games Expo specific scenario. While the cinematic scenarios are intended to be done in a shorter time frame than the on-going campaigns, an even shorter scenario was needed for the UK Games Expo to allow for more play sessions.

Titled “Hope’s Last Stand”, the demo focused on the aftermath of the infestation of Hadley’s Hope (it turns out that Effekt co-host Matthew is a fan of Newt’s Tale!) and was comprised of three shorter scenarios, each of which focused on different thematic elements from the Alien series (and the RPG): space truckers, corporate scheming and pulse rifles!

Shevvie and I ended up in the third session on the Friday where we got to enjoy the action orientated scenario. Our group of four played Hadley’s Hope volunteer Colonial Militia and it was up to us to go and turn on the colony’s distress beacon. Most of the colonists had locked themselves in, leaving the rest of the colony void of life – except for the Aliens.

One of the things I found particularly interesting was the concept of each player having their own personal agendas, that if they completed could potentially reward them later on. Because of my lack of roleplaying experience, I wasn’t able to get into the actual roleplaying aspect as much of the rest of my group so while our commanding officer was determined to maneuver the group into a conflict with an Alien so he could take it down himself, and Shevvie was asking some peculiar questions about the ease of carrying those facehuggers from the medlab, I was a little more reserved unfortunately.

But I could certainly get into the dice rolling! I’m not sure how I’m going to make dice rolling sound exciting, but they had a particular mechanic with the dice that just dramatically upped the tension of the entire experience – especially when the amount of dice you’re rolling gets larger and your luck (well, my luck) sucks! 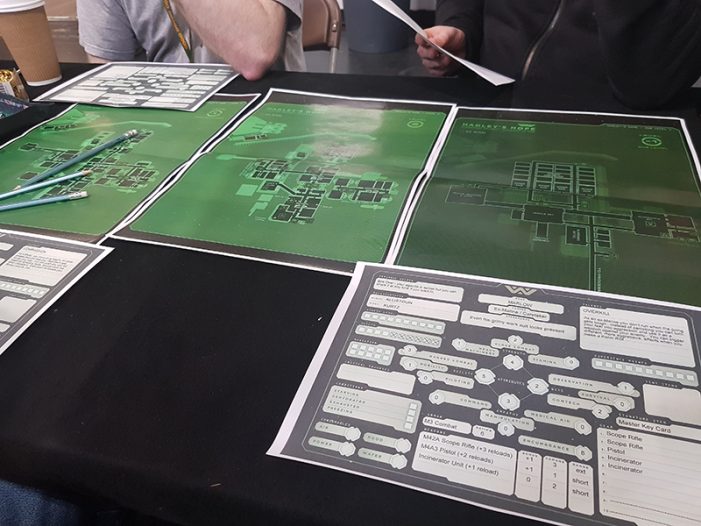 The scenario maps & my character sheet.

Typically, you’re rolling dice and just looking for 6s. The rest of the numbers don’t matter. The amount of dice you roll depend on your character’s skill set, but it always comes down to the 6s that allows you to succeed and progress the narrative.

That is until the stress dice are introduced. Given what your characters are going through, there’s some genuine reasons to get pretty stressed out. Just seen a body dragged off into the darkness? Stress. That pulse rifle you’ve just let rip on fully automatic? You guessed it! Stress!

Given a different colour to differentiate them from the typical dice, your 6s on the stress dice contribute towards your success but you do not want to roll a 1. Panic starts when you roll a 1 and the whole situation can just spiral out of control depending on the effects you trigger. It might not sound too exciting on paper but when you’re playing, it genuinely does a lot for the tension you’re feeling while playing.

Having seen the devastation of Hadley’s Hope interior, our rag-tag squad of Colonial Militia decided we were going to head out into the cover of storm and out past the storm wall to the air traffic control tower by the landing pad where we were able to repair the local relay circuitry.

Then we were engaged by an Alien! It took an absolute battering, taking on the brunt of a seismic charge, my flamethrower, pulse rifles and pistols, before it finally started to retreat. We pursued, spurred on by our CO, and it finally went down.

And then time was up! We’d actually ran over our time. It certainly didn’t feel like 80 minutes had passed! At the time, ours was the only group to make it through a scenario without a single character death, though I’m not sure how the other groups fared over the weekend! 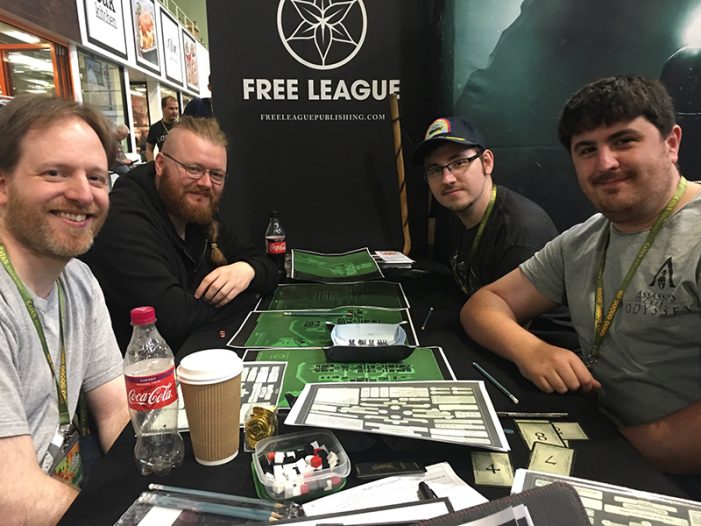 “The first 💯 % survival. This crew of well armed militia went straight for there objective. Not messing around. Good tactics.” Shevvie is in grey on the right, Hicks is in the Nostromo cap next to him.

As a demo session, the event really did its job! I came home from the UK Games Expo ready to dive into the rest of the Cinematic Starter Kit and Shevvie would not stop talking about it for the rest of the weekend. I understand that Free League was also particularly impressed with Effekt’s scenario and there’s interest in publishing it officially as part of the game.

I’m really excited to actually play through the complete Chariot of the Gods scenario! It was so damn fun! Hopefully with more playthroughs I’ll be able to loosen up and get into the actual roleplaying element and get in character but I’m certainly intending on trying harder!

We’re also planning on recording some sessions to release as part of our own podcast and/or on the Alien vs. Predator Galaxy YouTube channel so you can join in on the fun! In the meantime, if you head on over to the Effekt Podcast’s website (or check out below), you can listen to them playtesting the Hope’s Last Stand scenario!

If you’d like to learn more about Alien: The Roleplaying Game be sure to pop on over to the game’s official website! If you like what you see you can also pre-order it now and get early access to the Cinematic Starter Kit. The physical books themselves will be released in November.