Alien vs. Predator: Armageddon was recently released and brought an end to the Rage War. We posted our review of the book (and some thoughts on the series as a whole) earlier this month and we’ve now caught up with the author, Tim Lebbon, for some last thoughts on the series and a little about Tim’s future involvement with the Alien and Predator series.

This interview does contain some major spoilers.

AvPGalaxy – I’m happy to be welcoming back Tim Lebbon to your screens! It’s been nearly a year since we last caught up with Tim after the release of Predator: Incursion. Thanks for joining us again, Tim. How have you been getting on?

Tim Lebbon – Thanks for having me back! All good here thanks. I’m a little bit older, and none the wiser.

AvPGalaxy – You’ve been working on Alien and Predator books for about two years now. You’ve had the Fox conceived Alien: Out of the Shadows and your own brainchild with the Rage War. How have you found the experience over all?

Tim Lebbon – Lots of fun. It’s been a bit intense sometimes, and at times I’ve felt a bit over-Xenomorphed. But I’ve been an Alien fan since my teens, so to be able to write four novels set in that universe has been a real dream job. Writing a Ripley story was fantastic, and then the Rage War felt more like my own thing, probably because it was quite different from any of the Alien movies in that it was massive scope. Now all I have to do is to convince Fox to let me write Alien 5…. or an Alien TV series. I mean, come on, it would be epic, and TV is where it’s all happening right now. And I have the perfect idea.

AvPGalaxy – How have you found the response to the series? Has it been what you expected?

Tim Lebbon – Well, yeah, I guess so. In that I expected some people to hate it, and (hoped) that some would love it. It’s always been the case with existing properties that there’s a pretty much guaranteed mix of reactions, from those who love the universe as it is and don’t think it should be touched, to those who welcome new fictions set in that world. I think between the standalone novel, and the Rage War books, I wrote two quite different types of story. Generally people have been very kind. And that’s gratifying, because I wrote these books largely as a fan. It wasn’t just a ‘job’.

AvPGalaxy – You’ve done so much world-building, created so many characters and killed many, many, many people throughout the Rage War. What has been the most fun part of writing this series?

Tim Lebbon – I think writing the third book, and drawing together all the threads from the first two — story arcs, character journeys, timelines — as well as being a huge challenge, was also a lot of fun. It’s a really daunting task writing such a wide-ranging trilogy, and it’s very satisfying when you finally see the end result hitting the shelves. Also, I got to kill loads of friends. 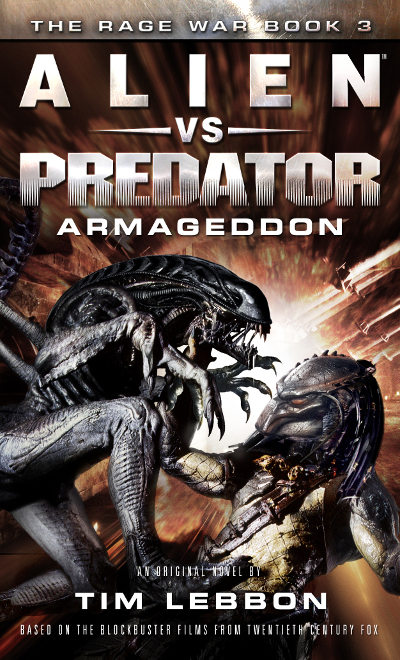 The cover art for Alien vs. Predator: Armageddon.

AvPGalaxy – And on the reverse of that last question, what have you found to be the most challenging aspect of writing the Rage War?

Tim Lebbon – See above. I guess I like setting myself challenging writing projects, so working my way through a difficult task is also enjoyable for me as a writer. I’m currently writing the first few chapters of a novel set in 1070 in South Wales, and researching that and trying to get all the detail right is a big task and takes a lot of work.

AvPGalaxy – How much of the Rage War changed over the course of writing?

Tim Lebbon – It’s inevitable that something like this changes quite a bit from conception to final execution. With my original novels (not tie-in stuff), I usually write a proposal and then often hardly refer to it during the writing of the novel. I just go where my mind takes me, and the proposal is always there to either get me back on track, or to kick-start my original idea and concepts if I get into difficulties. But with these novels I had to follow the outlines pretty closely if the whole thing was going to work. Saying that, the Drukathi — a major part of the book — grew a huge amount in importance while I was writing book 2, and by the third book they’d really intruded and said, We’re here too! Which is nice. Or maybe it isn’t …. maybe they really are out there…

AvPGalaxy – I was hoping you could clear something up about Liliya for me? As the book comes to a close and she sends the self-destruct  signal, you mentioned her heart super heating. I was wondering if the intention was that she was also self-destructing?

Tim Lebbon – That was the idea, yeah. Just like the Rage’s android Generals.

AvPGalaxy – Let’s talk a little about the Drukathi! The original concept for the trilogy was “what if an alien species had weaponised the Aliens”. In Armageddon you heavily imply that the Drukathi are responsible for manipulating the Rage. Were the Drukathi a holdover from that original concept? Had it always been envisioned that they would be influencing the motivations of the Rage?

Tim Lebbon – In the original concept that I worked on for Titan, it was the Rage driving everything. Then, when I worked on the first novel and had the Rage discovering such advanced alien tech, I started to think about who’d put it there and whether it had been left behind on purpose. So as the novels went on, I started to imagine an even greater force being behind events. It’s pretty chilling, and it seemed to fit nicely into the universe, and echo the themes of control (Weyland-Yutani) and mystery (the Yautja).

AvPGalaxy – Who exactly are the Drukathi? Is that the Predator name for the Faze? Are they the dog-aliens you introduced in Alien: Out of the Shadows? Or were they the Engineers?

Tim Lebbon – I intended them to be the dog-aliens. The Engineers were never really on my mind whilst writing the novels (partly because … well, I was told I couldn’t go there). I like the idea that they’re an ancient civilisation not here anymore, but they’ve left something of themselves behind. 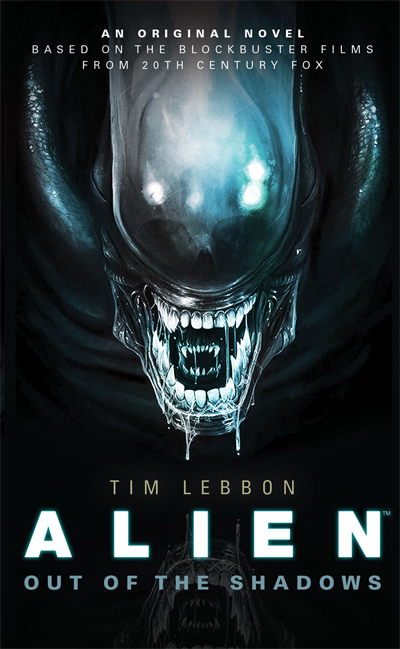 AvPGalaxy – I absolutely loved the grim ending of the book! That despite the main character’s victory, mankind had still lost. What I did find surprising was the direction you took the “universe” at the conclusion of Armaggedon. You took it a step further and not only was homebase crippled, the human Sphere was left with uncontrolled Aliens and there were shipborn Rage still out there, but you also took away one of the biggest scientific developments that mankind had achieved. It was essentially another reset to mankind’s capabilities and the continuity. Mankind could have been left crippled without taking down the dropholes. What led to that being the direction you took the universe at the end of the novel?

Tim Lebbon – I like grim. Yeah, I guess it was quite a big ending. I liked the idea that to avoid the inevitable, a huge event had to occur, and that knocking humanity back a couple of hundred years was the only real way they could have achieved this. A Pyrrhic victory. I think it does leave a really nice background for any future fiction set in this universe. I’m not sure how this might fit in with the Prometheus sequels, but I guess no one does as yet. New movies will always trump tie-in novels when it comes to canon, so who knows what the future might hold?

AvPGalaxy – Where do you envision the relationship between mankind and the Predators going now that the immediate Rage threat has been defeated?

Tim Lebbon – Well, I don’t think it’ll be all touchy feely. I reckon plenty of Predators won’t have liked the team-up. It was a case of enemy of your enemy is your friend, but now that’s pretty much over, I think it would go back to similar to how it’s always been. For a while, they needed us as much as we needed them. Not any more.

AvPGalaxy – I believe you are going to be writing a Rage War prequel in Titan’s upcoming Predator anthology. I was hoping you could tell us a little more about what’s in store for us?

Tim Lebbon – Yep, I’m writing a DevilDogs/Akoko Halley story for that anthology. It’s set before the Rage War and takes place when she’s a Captain, during her early life in the Colonial Marines.

AvPGalaxy – This question isn’t Rage War related but it is anthology related. You’ve also got a story in Bug Hunt, the Alien anthology, and that story revolves around a different sort of extraterrestrial encounter with the Colonial Marines. Could you tell us about what to expect from that story?

Tim Lebbon – That’s another Halley story! This time with the DevilDogs you’ll recognise from the Rage War books, they come up against creatures called fire spites (mention in the third Rage War book … the Yautja have a sample of one in their asteroid). 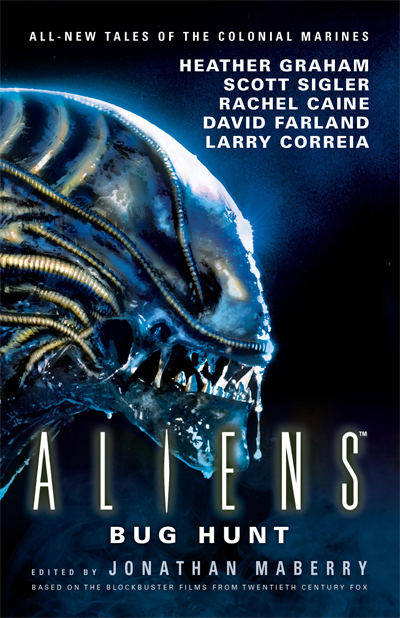 AvPGalaxy – You will have been responsible for writing 6 entries in the Alien and Predator universe. You’re giving the Perry’s a good run for their money! Are there currently any plans for you to return?

Tim Lebbon – No plans at the moment.

AvPGalaxy – I don’t believe you had anything to do with it but Dirk Maggs and Audible recently adapted your first Alien novel, Out of the Shadows, into an audio drama. Have you had chance to listen to it?

Tim Lebbon – Yes, they did a fantastic job, it’s really great. And no, I didn’t have anything to do with it, unfortunately. You probably heard about it before me.

AvPGalaxy – One of our community members, The Alien Predator, has a couple of questions for you. First off he would like to know if Fox has any plans to continue with the Rage War related releases?

AvPGalaxy – The Alien Predator would also like to know a little about the Acturians. The Arcturians were established as a very friendly and open race in Sea of Sorrows, River of Pain and even in Aliens. But in Rage War, they’re treated as enigmatic, and human settlers go to settle on Arcturus to get away from living in the Human Sphere because they’re disillusioned with the rest of humanity. Did relations with humans and Arcturians go downhill at one point?

Tim Lebbon – Maybe that’s a story for someone else to tell one of these days! Honestly, I had no real background history in mind, so maybe it would be interesting to explore the Arcturians more.

AvP Galaxy – I’m sorry but I have to ask every time. When do I get to see Hoop again?!

AvPGalaxy – As is tradition – before we sign off, is there anything you’d like to say that I haven’t given you the opportunity?

Tim Lebbon – Thanks for having me along again! It’s been so much fun playing in the Predator/Alien universe. Maybe I’ll visit again one day.

AvPGalaxy – Once again, Tim, thanks for taking the time to chat with us.