In 1989 Dark Horse released their first Aliens comic. Not ten years later, they released their last. With the exception of two AvP graphic novels (and those freebies in the DVDs), the world hasn’t seen anything in the way of new Alien comics. 2009 changes that all. Ten years after the release of the last comic and on the 30th anniversary of Alien, Aliens is set to return to the world of comic and I got chance to talk to Zach Howard, the artist behind the new comic series.

AvPGalaxy – First off I’d like to thank you, Zach. For those out there who haven’t been paying attention and are wondering who the bloody hell you are, can you tell us a little about yourself and why the visitors of AvPGalaxy would be interested in this interview?

Zach Howard – Wow… I guess I’m just an illustrator. I’ve been drawing comics fulltime for about seven years now. I’ve worked for damn near everyone in the industry – Marvel, DC, Dark Horse, IDW, Image, etc. I tend to bounce around. I’ll even occasionally do crap outside the industry as well – album covers and covers for novels.

AvPGalaxy – Do you remember much of your first encounter with the lovable Xenomorph?

Zach Howard – I saw Alien with my father when I was about 5 or so. It scared the living crap out of me. I was definitely hooked because I was rather excited for the sequel.

AvPGalaxy – Now you’ve been working with Dark Horse for a while. On their Star Wars comics, doing your own series. From the synopsis to Outer Orbit, it also seems like you’ve been a fan of the Aliens series prior to getting this job. Can you tell us a little about how you became attached to the new Aliens series?

Zach Howard – Chris Warner (my editor for Outer Orbit) asked me if I was interested. I was just coming off a Spiderman book and didn’t think I was ready for more licensed work. So I only committed to a calendar pinup. Although I had fun drawing the AvP characters, I was already gearing up for another book. That, however, fell through and Chris told me that the offer was still open so I took it. It easily worked out for the best.

In all actuality, Aliens is a perfect fit for how I draw. My work is dark and highly structured so it’d be stupid of me not to take this opportunity. But, I am an extraordinarily stupid person so it took me quite some time to commit. 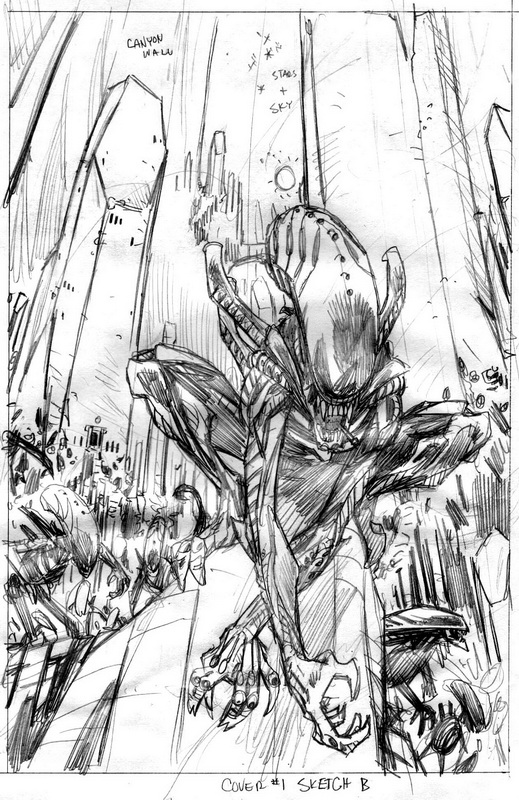 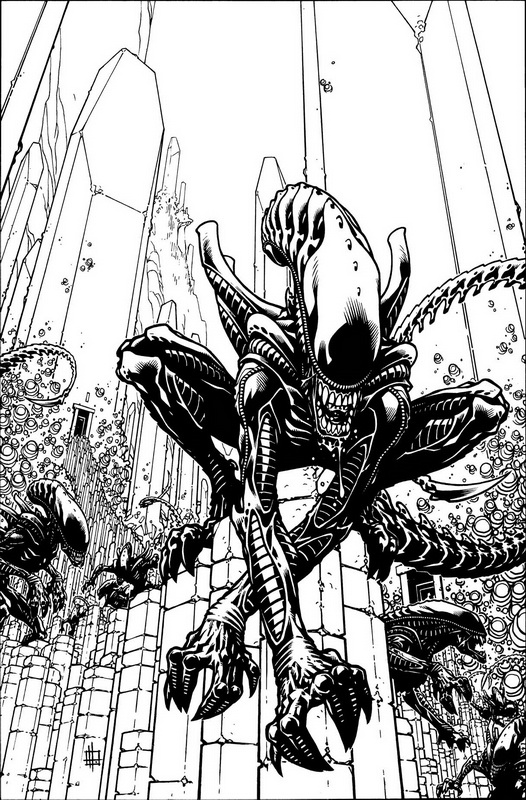 AvPGalaxy – The Aliens series is synonymous with talented artists: H.R Giger, Syd Mead, Ron Cobb and Dave Dorman to name a few. Would you say people such as these have influenced your work on Aliens?

Zach Howard – Honestly, no. My only current influences for me with this genre are Mike Mignola and Kevin Nolan – and even that is minimal. Most artists who have drawn the books have kind of been all over the place with the Aliens’ anatomy. So I found myself just kind of figuring out things for myself.

I’m not saying all previous artwork sucked. I just couldn’t find any consistency. That and quite a few artists hid anatomy to either speed things up or they just couldn’t draw them well. There are a few gems in there though.

Zach Howard – My basic design for the aliens just came about with me making the anatomy work within the parameters of my style, plus there are some new wrinkles specific to the story. I just had to figure out where everything went and draw it in a way that would work from any angle. I’ve been slowly adding to that since then. Exciting, huh?

AvPGalaxy – Dark Horse’s last Aliens series was Xenogenesis. It was their attempt to modernize the Alien comics. Would you say you’ve changed the artwork to conform to the current styles of comic books? Or that modernization is what Dark Horse is after given they’ve also hired Mark Irwin of Spiderman fame?

Zach Howard – I wasn’t really given any overly specific art direction. I’m just supposed to make it look pretty and conform to the story. I believe that this is, for the most part, a relaunch of the series that is going to expand the Alien’s universe a bit. Although, I don’t think that Dark Horse is throwing out the old stuff, I haven’t been forced to follow in their footsteps. Artistically, at least.

I don’t know that Mark was brought on for any specific reason other than that fact that he is really good at what he does. We’ve gotten to know each other’s work during the FCBD pages. We should be hitting the series at full speed! 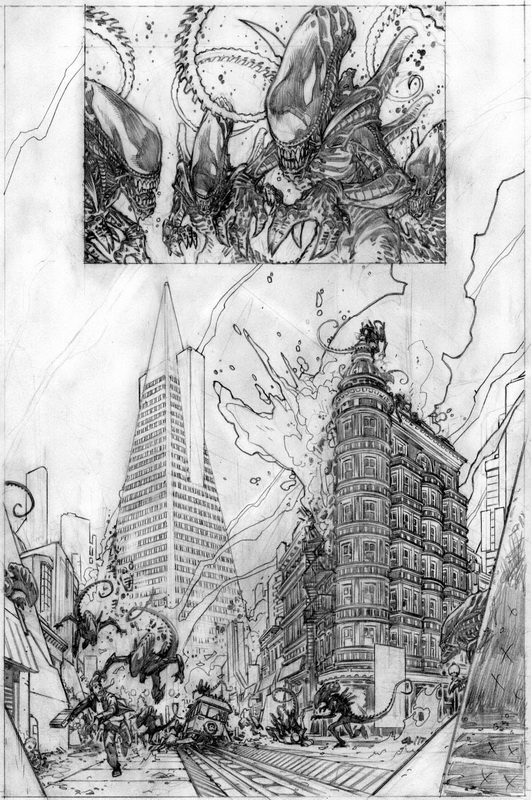 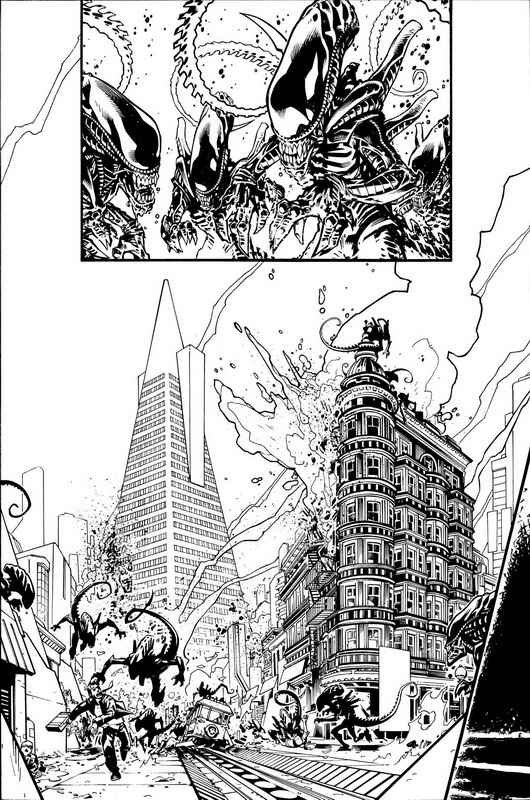 AvPGalaxy – You’re doing both the interior art and the cover art for Aliens. Besides the obvious, what are the differences in creating the artwork? Is the process different?

Zach Howard – Well, the most obvious thing is that I’m inking the covers and Mark is inking the interiors. I really like to ink my own work, but this book is on a schedule and I need an inker to make it work.

Conceptually, though, I need to have a bigger visual punch for the cover artwork. I’m not necessarily telling a story with it – I’m just trying to have it jump off the racks and get people excited. The interiors are quite a bit more methodical and take a different mindset. That and I tend to cry more when I draw interiors.

AvPGalaxy – From the cover and the story details, it would seem the comic takes place in ancient underground structures. In the original Alien script, they discovered an ancient pyramid. Your cover has some similarities to the concept art of the pyramid. Is this more than a coincidence?

Zach Howard – Nope. I had no idea about the pyramid thing or even knew it existed. I’ll just have to take your word on that. =) Maybe I should have drawn pyramids and saved myself weeks of design work.

The story actually takes place in a crevasse that seemingly doesn’t have a bottom. One can travel downwards deeper into the city and chillingly never reach the end.

A weirder coincidence is that I used to be an amazingly gorgeous man with striking chiseled features before I started working on this book, and now I’m fat and have bags under my eyes. I also no longer wear pants. Weird.

AvPGalaxy – Compared to previous Alien comics, Aliens’team is rather small. Do you have much interaction with John Arcudi[writer] or Mark Irwin[inker]?

Zach Howard – Yep, I talk with both of them quite a bit. Mark, in fact, will not stop calling me. At 3 in the morning, damn near every night, I get a call with nothing but heavy breathing on the other end. But I know it’s him! I can hear his handlebar mustache scratching against the receiver.

On a side note, constant communication will always make for a stronger product. When everyone is on the same page, there is less chance for slip ups and apathy. I’ve found that the fewer people involved in a book, the better the outcome. It’s a tighter unit of operation and helps keep the weak links out. 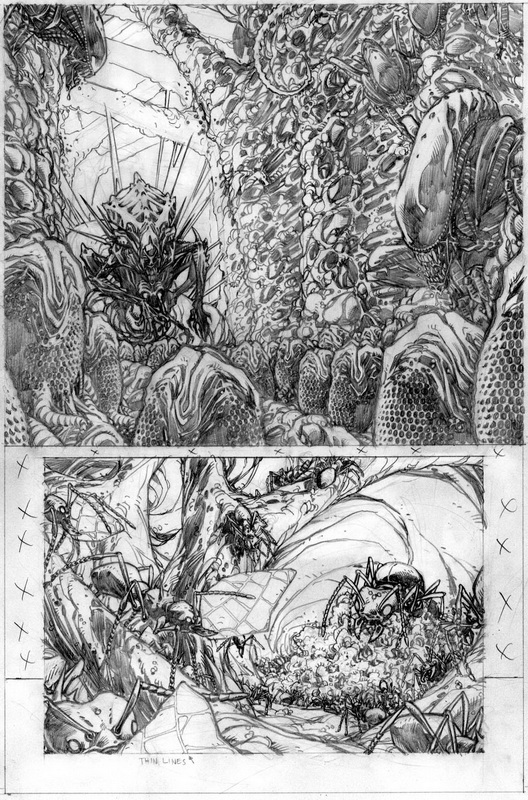 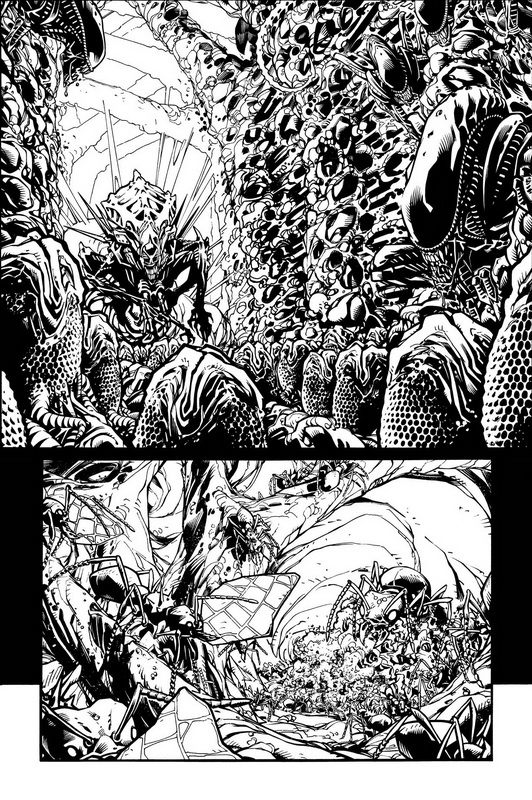 AvPGalaxy – How far along are you with the art? Is issue one completed? Have you started working on issue two?

Zach Howard – I’ve finished the second cover and it’s off to be colored. As for the interiors, I’m still on issue one. I had to pencil the FCBD stuff first and that put me a little behind where I wanted to be. It’s looking good, though. I think the fans will be happy with what we are doing. And if not, I’ll have Mark call them.

AvPGalaxy – I realise you can’t talk much about the story of the comic, but in one of the pieces of art you have released, it looks like Aliens are attacking New York or San Francisco…?

Zach Howard – Yeah, that’s page three from the FCBD story. It’s basically a recap of past books and John (the writer) just chose an American landmark. So San Francisco it is! It’s a fun page – nothing like drawing Aliens chomping down on folks.

AvPGalaxy – Dark Horse has just released the information – and cover art – for the Predator series? Have you seen more of it and what do you think?

Zach Howard – I haven’t seen a thing yet. I’m locked down here in my basement until I finish up my series. I dig Saltares, seeing how I grew up with his work, so I’ll be jazzed to see it. I’m sure it’s looking good.

AvPGalaxy – Chris [Dark Horse editor] was quoted as stating that the reason for a single writer for all three comics was for coherency. Does this mean all three comics will tie into each other and is this reflected in any of the artwork?

Zach Howard – I don’t think you’ll see any visual tie-ins for now, but Chris is leading towards something that I can’t talk about. So there is a reason. Just hold on and all will be shown soon enough. Chris knows what he is doing.

AvPGalaxy – How did you actually prepare for this job?

Zach Howard – Well, I got incredibly drunk on Purple Passion for about two weeks while ingesting as many mayonnaise covered potted-meat products as my tender stomach could hold. By then my ass weighed so much that I could no longer get out of my drawing chair. So I’m basically forced to draw the whole series since I can’t really get up to do anything else. 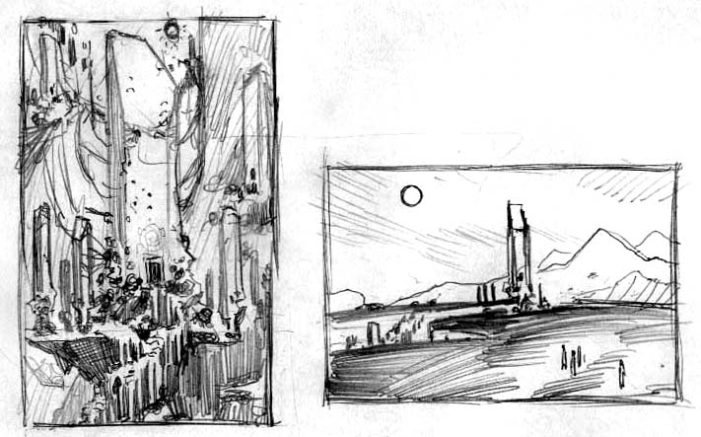 AvPGalaxy – Have you read many of the old comics from Dark Horse?

Zach Howard – Absolutely. One of them is the reason I draw comics today.

AvPGalaxy – And of course, the ever typical question! Favorite Aliens film and why?

Zach Howard – I will have to go with ALIENS. I know it’s taboo to say anything but the first film, but screw you all. By the time ALIENS came out, I was old enough to understand what was going on and have empathy for the characters. Being a military brat and eventually joining the Marines myself, I’ll always have an affinity for that film. It makes me crap my pants with excitement every time I watch it.

My favorite part is when Ripley makes it to the platform after rescuing Newt, with the queen in hot pursuit, only to find the android and the ship no longer there. There’s tension for you. Good stuff!

AvPGalaxy – Has your profession made you appreciate the Alien series from an artistic point of view?

Zach Howard – Of course. After having to draw these bastards on a daily basis, I’m forced to appreciate the intricate design work that has gone into them. I often sit back and think about how awesome these creatures are. No, tentacles or spider eyes or stupid crap that most people come up for extraterrestrials. It’s clean, creepy, and stylized. They might be the best designed monsters I’m aware of.

AvPGalaxy – Where does the future lie after Aliens? Will we be seeing you back for Aliens vs Predator or another Aliens comic?

Zach Howard – I’ll probably do another creator owned series directly after this. However, I think I’ll be back. I really like this genre and I think it has the potential for countless good stories. I’d actually like to do a book like Aliens: Salvation. To date, I feel that it’s the strongest Aliens book out there. No weak spots in that one.

AvPGalaxy – On behalf of the staff here at AvPGalaxy and all our readers, I’d like to thank you again for sitting down to answer my questions. Any last words before we sign out?

Zach Howard – Pray for me.