Over the course of the last ten years or so there have been numerous novels based in the Aliens universe and more recently the first original one. All the others have been novelizations of previous Dark Horse comics and I recently got the chance to interview Yvonne Navarro, the author of such a novel: Aliens: Music of the Spears. 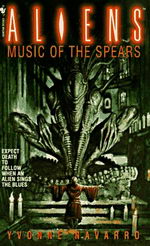 Corporal Hicks – Hi first tell us a little about yourself and what you do?

Yvonne Navarro – By night, I’m a writer. My first novel was a long vampire tale called AfterAge, published in 1993 and then republished a couple of years ago in hardback by Overlook Press. I’ve written novels (and short stories) about vampires, zombies, the end of the world, Aliens, science fiction, and just about every other conceiveable spooky and suspensful thing. Earlier this year I finished the first draft of the novelization for the film ULTRAVIOLET starring Mila Jovovitch. Finalizing that project is on hold since the movie has been postponed until the summer of 2006. During the day, I’m an Operations Officer for a government contract on an Army post, where I bully people into doing what I tell them by threatening to make them put $1.00 into the penalty jar on my desk. It works!

Corporal Hicks – Take it you’re also a fan of the films?

Yvonne Navarro – Definitely! My favorite will always be ALIENS, although I really loved the dark version of Sigourney Weaver in RESURRECTION. ALIENS, of course, had Michael Biehn. You just can’t top that. :) A friend actually gave me an autographed picture of Michael for Christmas one year. I had it on my desk at work for a long time, but it was kind of a spicy picture, so I finally decided it would be more appropriate at home.

Corporal Hicks – You wrote ‘Music of the Spears’, tell us a little about that novel.

Yvonne Navarro – I really enjoyed writing that, and even though it was based on the three-part comic series, I had a lot of freedom with it. As long as I stayed with the basic concept and structure of the story, I could pretty much get there any way I wanted. It was also the first time I’d novelized ANYthing, so that made it also a challenge and a new experience.

Corporal Hicks – It is actually a novelization of the comic, how did you adapt the comic? Using the actual script or the comic itself?

Yvonne Navarro – The publisher sent me the actual comics, and I made an outline based on those and incorporating the stuff I wanted to add. I was already a fan of the movie series and pretty familiar with it.

Corporal Hicks – A lot of comic novelizations have addition scenes in them from the comics, does your novel have any and why do you write this extra scenes?

Yvonne Navarro – Yes, there are more scenes. Basically you want to have a novel with a little ‘meat’ on it, and the short length of a comic book, even a three-comic set, just isn’t going to be enough to fill out a book for a decent read. The word requirement on Music of the Spears was 80,000, and there’s no way to stretch three comics into that without just meadering around and writing fluff. You need those extra scenes, backstory, etc. Folks who buy books based on comics or movies generally want to know more about the characters, too, and like comics, movies don’t have the time to give you much backstory. Plus it’s always interesting if you can throw a subplot or two in there, extra suspense and scary stuff, to make everything a little more complicated and intense.

Corporal Hicks – How did you become the one to write the novel?

Yvonne Navarro – I think it was a combination of right time and right place, and having an agent who had an open line to the publisher. I was a new novelist– my agent had sold the publisher my first novel, and they liked it enough to make it part of a three-book contract. I was working on the second novel and the novelization got slipped in between as an extra project. It had come into the publisher and they were looking for someone to do it, someone who could write suspensefully and smoothly, was familiar with the movies, ‘hungry’ and dependable. I fit the bill.

Corporal Hicks – Did you have a lot of contact with Chet Williamson, the author of the original comic or anyone from Dark Horse?

Yvonne Navarro – I know I talked to and emailed a couple of times with Chet (he’s an old friend–I’ve known him since the 1980s) about the comics. It was great fun.

Corporal Hicks – How long does it actually take to write a novel of this size?

Yvonne Navarro – Novelizations are a thing unto themselves– it’s not how long it takes the author to write it, it’s how long the publisher GIVES the author. I can’t remember exactly, but I think I had 3 to 4 months on Music of the Spears. More and more nowadays publishers are allowing a mere five or six weeks, which is unfortunate because that often results in quickly written books that could have been much better.

Corporal Hicks – You haven’t done any Alien novels since, any reason?

Yvonne Navarro – Haven’t been asked! I’m also not with that publisher anymore, plus for some reason they pulled Music of the Spears out of print and won’t put it back in. I always received good comments about that book, so I confess that aggravated me a bit. Although there are other publishers doing Aliens novels, I haven’t pursued any new Aliens projects.

Corporal Hicks – Would you consider doing any more Alien novels?

Yvonne Navarro – I might, although I’ve spent a number of years doing movie tie-ins and Buffy stuff, and I really want to get back to doing original work. Still, an Aliens project would be tempting!

Corporal Hicks – Have you read any other Alien comics or novels and if so what did you think?

Yvonne Navarro – Alas, no. Time is at such a premium, especially since I have this full time job. Most of my reading for many years has been almost solely research for book projects. Like the solo novels, I’ve also been determined to get back to personal reading for fun, and after having the same book on my nightstand for two years (clearly it wasn’t calling my attention), I finally added another one about a month ago and have managed to read about 80% of it.

Corporal Hicks – Have you ever met any of the other authors of Alien novels.

Yvonne Navarro – I can’t say for sure, but it’s likely that I have, at writers’ conventions and such. There are quite a number of the novels and I can’t keep up with all of them and who’s writing them, so…maybe!