AvPGalaxy – Are different characters defined by their skills or weapons sets? Can they be customized?

Adam Tierney – Because of the Metroidvania-style gameplay, we couldn’t permanently link certain characters to certain weapons or abilities (because once they die, you might not be able to proceed). In the save rooms, the player can swap between any of the weapons they’ve found, which can be yielded by any character.

AvPGalaxy – Can we expect any sort of upgrade system for the marines?

Jeff Pomegranate – Absolutely. The player can access and upgrade a robust selection of weapons from the films.

AvPGalaxy – What can we expect in regards to equipment and weaponry in this game? Have new elements that didn’t exist in the previous games been included?

Adam Tierney – Off the top of my head, you have the pistol, pulse rifle, smart gun, shotgun (“for close encounters”), flamethrower, hand grenades, launched grenades, flares, key cards, motion tracker, welder, explosives, wrench, hacking device, keys, oxygen tank, and flashlight. At various points you also get to space walk, man a power loader, and drive the APC. Some of these elements are new, but in general our focus was to get everything in here that fans of the Aliens series would expect to be able to do. 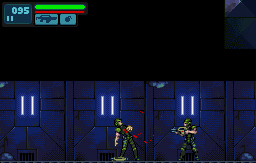 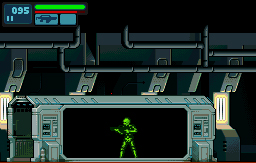 AvPGalaxy – Will there be any new entries into the Alien gaming world such as fly-able drop-ships or the only once before seen sentry guns?

Jeff Pomegranate – We’ve sprinkled a few here and there. Again, I don’t want to give away any surprises as far as special modes or unlockables go, but you’ll be able to pilot an APC at one point. Also, I’m not sure if any games have done this before, but if you’re not careful, you could end up with an alien impregnated marine in your roster, which is never a good idea.

AvPGalaxy – What’s the general level of difficulty for this game?

Jeff Pomegranate – Though it’s not as hard as Contra 4, I wouldn’t be surprised if we get some angry fan mail on this one.

AvPGalaxy – Is there anything about the DS platform that brings something unique to an Aliens game?

Adam Tierney – Our bottom screen is packed to the gills with equipment, weapons, and information. The DS platform allowed us to keep everything present visually for the player at all times, without cluttering the gameplay screen. It’s really nice, for example, to have your map and motion tracker running on the bottom screen, while inching your marine forward cautiously on the top screen.

There’s also an unlockable extra mode that’s perfect for the DS platform. Let’s just say it involves a stylus, a hand, and some fast reflexes…

AvPGalaxy – How would you say Aliens – Infestation differs to your previous titles?

Adam Tierney – Although we’ve worked on dozens of action platform games, we haven’t really tackled the Metroidvania genre much (beyond our Shantae series). This game is all about exploration and lock and key mechanics, rather than blindly charging forward. So orchestrating all of that into a satisfying pace, and ensuring the story made sense, was a fun challenge. 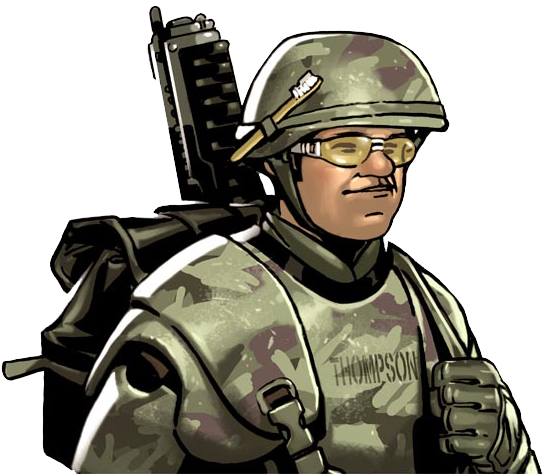 AvPGalaxy – WayForward is well known for the Contra games. What has your experience with the Contra titles brought to Aliens – Infestation?

Adam Tierney – We began the game about a year after completing Contra IV, so that game was a big influence on how we approached this title artistically. As mentioned, Contra IV was also the primary reason we were offered the project. So we took the run-n-gun gameplay of that title, and blended in elements from modern stealth and FPS titles. So although you can run and fire like in Contra, you can also walk and fire, fire while badpeddling, crouch, fire while scooting (forward or backward), dodge and roll, take cover, tactical reload your shotgun, and blind fire at enemies from behind obstacles. We hope gamers will be pleasantly surprised by how deep the abilities of these tiny pixel marines are.

AvPGalaxy – How has WayForward ensured that gamers will repeatedly pick up Infestation and continue playing it?

Jeff Pomegranate – First and foremost, it’s just a fun game. Add to that the fact that you can play as 19 different marines, each with distinct personalities and dialog, plus the inclusion of and adherence to a myriad of the things that make Aliens such a beloved part of our pop culture, and I think our game will satisfy anybody jonesing for a little action-packed, extra-terrestrial fix.

AvPGalaxy – What is the gameplay length of the game?

Jeff Pomegranate – If you put in a solid day’s work, you should be able to get through it (depending on how many marines you feel comfortable leaving behind).

AvPGalaxy – Thank you for your time. We look forward to learning more about Aliens Infestation very soon.

Adam Tierney – Thanks! We hope you like the game!

Aliens: Infestation will be in stores on October 11th in the US and on September 30th in Europe for the Nintendo DS.