January 2014 saw the release of Alien – Out of the Shadows, the first in a trilogy by Titan Books. We previously spoke to author Tim Lebbon in September 2013 as part of our podcast series. Having now had the chance to read and review Out of the Shadows, Tim kindly took the time to answer some of our follow up questions.

Beware, this interview contains spoilers about the book.

CH – Thanks for agreeing to speak to us again, Tim. I was wondering what you thought of the response so far?

TL – I’m thrilled by the response. I was bracing myself, to be honest. Not only have I written an Alien novel that is canon, but also one featuring Ripley, so I was a little concerned about how that would be received. Generally the response has been fantastic. And I’m delighted, as I had so much fun writing the novel.

CH – When we spoke previously you revealed that the initial story idea came from 20th Century Fox and that all three authors were handed a brief summary of what Fox wanted to see in your particular novel. What did Fox specifically ask to see in Out of the Shadows?

TL -They wanted the story set between the first two films, suggested that the android we all know and love had inserted himself into the shuttle’s computer, and also mentioned the necessity that Ripley could not remember what happens to her in this book.

There was more, but to reveal that would be a spoiler for the second novel.  There is an over-arching plan for all three books

CH – So they dictated that Ripley had to be in story?

TL – Yep, they requested that. 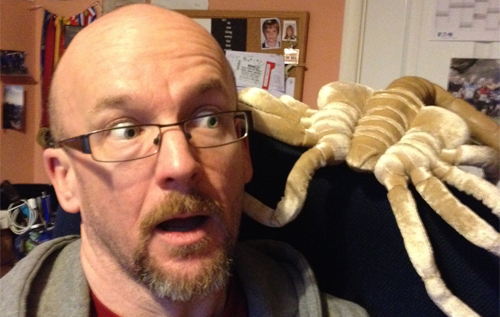 CH – So you knew you had to have Ripley, Ash and set the book in between Alien and Aliens. What led to you to the story we saw in Out of the Shadows?

TL – I was trying to capture the essence of both movies … the claustrophobia and terror of Alien, the dread and action of Aliens. I wanted a feeling of deep, growing dread (both in the characters’ situation, and in Ripley’s understanding of what was happening to her and her loved ones), and I also wanted to introduce a ‘ticking clock’ scenario. In short, I was pretty brutal to my characters. But I also love writing about people in extreme circumstances, and exploring the power of the human instinct to survive no matter what.

CH – I really liked your cast of characters – Hoop in particular. Who did you have the most fun writing?

TL – I like Hoop, he’s a real everyman character who digs deep to find heroic aspects that he wasn’t aware of. But I have to say I had most fun writing Ripley. I was a little daunted at first, but once I started getting into her head I loved every minute of it. I was always aware that this was a Ripley who had only ever seen and battled one alien, but whose future held so much more horror. Bridging between those two parts of her life was a real challenge, but I enjoyed it. She’s one of my favourite movie characters ever. It was a real honour to write her.

CH – Was there anything that ultimately had to be removed from the book for any reason?

TL – The editorial process went very well. I was a little worried about how that would go — I received notes from Fox as well as my editor at Titan. But the suggestions that came from Fox were really useful and they went to make a better book, which is what you always want from any editorial input. There was nothing that had to be removed, although the ending was changed a little. Nothing major, just a subtle change in the order of events. My editor and the Fox editor were very perceptive.

CH –The big challenge for your book was going to be how you handle the big reset at the end of it – why Ripley never remembered the events of the book. How did you conceive the memory-wipe?

TL – (Spoilers here) The med pod was a nice link to Prometheus, while not actually getting into the mythology of that story (which I didn’t want to do). The whole memory thing was the big challenge for me in this book, and if I’m honest, the one aspect that worried me the most (both my execution of it, and readers’ reaction). Fox did come up with one idea as to how that would happen, but I changed it a little and made it, I hope, more believable and acceptable. I like to think what happens is realistic in relation to Ripley’s character. 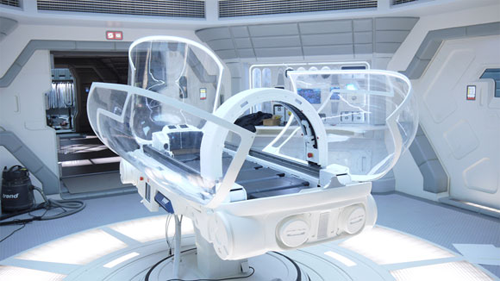 The med-pod as featured in Prometheus.

CH – A new video game, Alien – Isolation, is due out at the end of the year. It will have the player taking on the role of Amanda Ripley. Were you aware of the focus on Amanda in the game and did that play a factor in Out of the Shadows?

TL – Nope, not at all. I’m not a big gamer, although this is one I’ll probably pick up.

CH – One of the more effective weapons using in Out of the Shadows is the acid-spray gun. Considering how synonymous the Alien is with acid in the fiction world, why did you decide to take this particular approach?

TL – I didn’t want the characters to be armed with conventional weapons (pulse rifles, machine guns, anything like that). I liked the idea of them cobbling together weapons from their mining equipment, in a similar way to how the crew of the Nostromo made flamethrowers. And I liked the concept of attempting to fight fire with fire.

CH – Many fans are wondering if there is a connection between the new canine extra-terrestrials in Out of the Shadows and the mural (see below) in Prometheus?

TL – It wasn’t intentional, although the subconscious works in mysterious ways. 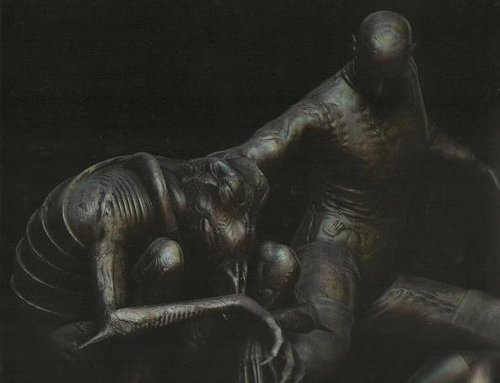 Mural from Prometheus that features a creature with a snout. The new aliens from Out of the Shadows perhaps?

CH – There we quite a few elements in Out of the Shadows that I really want to see carried over into the other two books. I was hoping you might be able to tease whether we’ll be seeing Hoop again? Or maybe more of the dog-aliens?

TL – I think Hoop might get a mention. And if anyone visits LV178 again, it’s only natural that the dog-aliens will be waiting.

CH – Some of our members are wondering if the Trimonite that the Marion is there to mine is significant in any way…?

TL – Not really, I just wanted to come up with a reason for a mining colony to be working on such an inhospitable planet.

CH – Now that the book is out and you’re able to see the feedback and you’ve had some time to consider – is there anything you would have done different if you had the chance?

TL – Honestly, not really. I think the book is action-packed, quite cinematic, and it brings together the aspects I love of the first two movies. I had a blast writing it.

CH – If you had the chance to come back and write another Alien novel would you and do you think you would like to write about?

TL – Yep, I’d love to. I think I’d like to go further back in the timeline of Weyland-Yutani. Alien: Origins, perhaps? I liked the subtle reference in the movie The Grey.

CH – Thank you for joining me again. Is there anything you would like to say to our readers before we sign off?

TL – Thanks for welcoming me into the xenomorph’s universe. Hope to see you again soon.