So, this is usually the part were I do a little introduction for the person I interviewed. The problem is, I really don’t think I need to. Come on, this is Steve Perry! We should all know Steve Perry…but I’ll do one for those that don’t know. Steve Perry is the man who launched the original Aliens novels and is one of the brains behind the every present Yautja representation of the Predators. 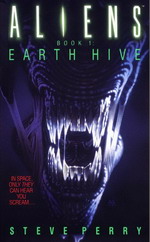 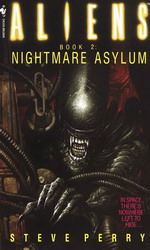 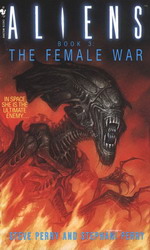 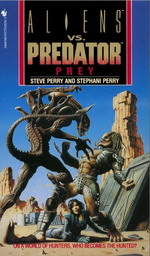 AvPGalaxy – Wow. I honestly can’t believe I’m interviewing you. Since I’ve started running websites I’ve always been looking for ways to contact you and we’ve finally got it! But for those out there who don’t know who you are, could you tell us a little about yourself and how you got involved with the Alien and Predator franchise?

Steve Perry – Before there was a Dark Horse Comics, the guy who would eventually found the company, Mike Richardson, owned a comic book store where I used to take my son when he was young. Mike and I would talk, he was a writer and artist, so we had things in common. A few years later, when he got the rights to novelize his graphic novels, he remembered me and gave me a call. I didn’t think it would be all that lucrative, but I thought it might be fun. It was. He liked what I did, so we kept going.

AvPGalaxy – I take it you were a fan of the two movie franchises before writing the novels?

Steve Perry – Oh, yeah. Aliens I was a great horror movie, A2, a good science fiction picture. A3, I didn’t like. Predator with Ahnahl was fun, Danny Glover, I’ve always liked, though I thought the first movie was better. AvP … well, they’d have done better to use the comics and the book my daughter and I did for a basis for the script. In my opinion.

AvPGalaxy – You launched the Aliens novel line, writing the first 3 novels and also the Alien vs Predator line, which you launched with your daughter. How exactly did you get the gig of writing the premiere novels?

Steve Perry – Through Mike Richardson’s willingness to give me the shot. I eventually got a Star Wars novel because he touted the Aliens novels I did to the Lucasfilm folks, that opened a nice door there. Dark Horse has been very good to me.

AvPGalaxy – Pretty much all your Alien / Predator novels have been adaptations of comics. How do you go about adapting comics for novels?

Steve Perry – Easy. You use the comics as an outline, and you expand that material, adding stuff to explain what you can’t show in pictures.

Steve Perry – I didn’t think so. My daughter and I kind of made her our own, we were able to give her some depth, we thought. Most of what she thinks, you can’t get in the comics.

AvPGalaxy – I’ll admit, I wasn’t overly fond of Earth Hive but I loved Nightmare Asylum and those that came after it. Did you find Earth Hive difficult to write in any way as it was your first Aliens adaptation?

Steve Perry – Only the name-swapping stuff, which we had to do for legal reasons as part of the franchise was tricky. The rest of it wasn’t so hard. You serve the material, and that was the story I had to work with.

AvPGalaxy – Did you have a lot of interaction with the writers of the comics when doing the novelizations?

Steve Perry – Not really. Different orbits, different media. I know the book writers — the late Bob Sheckley, Dave Bischoff, Dean Wesley Smith, Kris Rusch, and John Shirley and I go back twenty five or thirty years — we used to go to a writers’ conference every month in Eugene, OR, with Wm. Gibson.

AvPGalaxy – What was it like co-writing novels with your daughter, Stephani? How exactly did it work?

Steve Perry – We sat down and discussed the graphic novels, brainstormed ideas, and plotted stuff out. First couple, she did first draft and I rewrote what she did. Pretty quick it was obvious she didn’t need my help, so she started doing them on her own.

AvPGalaxy – Which of your Alien/vs Predator novels was most fun to write and why?

Steve Perry – Hard to pick a favorite. The first one was interesting just because it was new. AvP was fun because we got to use both. Not one of ’em I didn’t enjoy.

AvPGalaxy – What led to you writing AvP Prey? Was it your work on the Aliens line?

Steve Perry – Yeah. I think the idea of putting the two together was Chris Warner’s. He and I did a movie script for one of his comics, Black Cross, sold it, but it got shelved when somebody screwed up the deal, a timing thing with the actors, as I recall.

AvPGalaxy – Now one of your big impacts on the Alien and Predator franchise was the creature of the Yautja culture. Can you give us a little history on how the Yautja came to life? Why did you even decide to go into their POV?

Steve Perry – Showing stuff in a comic or on a screen is different than prose. If you are gonna root for somebody — the Predators — then you need to know what makes them tick. You can look at them and figure out a lot of what we wrote, it’s pretty obvious they are a warrior culture, and I have all this martial arts background, so it was a natural fit.

AvPGalaxy – Recently John Shirley released a new Predator novel which didn’t feature the Yautja but a new representation of the Predators called the Hish. For some of the hardcore Predator fans, this caused a pretty much uproar. And in the recently released AvP, writer Paul Anderson infused your ideas of honor into his Predators. Did you ever expect the Yautja to become that synonymous with the Predators?

Steve Perry – Not really. They didn’t want me to get inside their heads, but I thought it would make it much more interesting. Mostly the powers-that-be don’t much go there any more.

AvPGalaxy – On that note, you recently announced you’d pitched a new Predator novel to DH Press. Had you read Predator Forever Midnight to see what DH Press’ representation of the Predators have become?

Steve Perry – Yeah, I got a copy of it, but I’m taking a different path. My next one will be more like the first Predator movie, the viewpoint characters will be humans. Should have the draft done this summer, dunno when it is scheduled for release.

AvPGalaxy – What prompted you to want to play in the Aliens/Predator sandbox again?

Steve Perry – They asked, and it had been a while, so I thought it would be fun. Plus my daughter got another book from them, and I thought it would be cool to have us both showing up again and confusing people, since she writes under “S.D. Perry.” Lot of folks think we are the same person.

AvPGalaxy – How did you get involved with DH Press?

Steve Perry – Like I said, I knew Mike before there was a DH. I’ve done some other work on their projects over the years — did a minseries called Shadows of the Empire, Evolution, the novelization of The Mask, and Mike and I are currently working on a movie script tied to his new horror comic series, The Secret. He’s a very talented guy, Richardson — runs Dark Horse, does movies, writes comic scripts. I give him a hard time, but you have to admire a guy with his talent and drive.

AvPGalaxy – Can you tell us a little about Turnabout? Does it feature Yautja or Hish? What’s the storyline about?

Steve Perry – I can’t get into too much detail, other that what I posted on my blog. Should have a lot of action, but I won’t be getting into the Yautja or Hish material.

AvPGalaxy – Have you seen the new Alien vs Predator movie? What did you think of it?

Steve Perry – If you mean the first one, it was okay. Not great. Had some nice touches, but there were things I’d have done differently. They should have let me write the script …

AvPGalaxy – As one of the few authors to have written the Aliens and Predator teaming up, do you think you’d be interested in doing a novelization of AvP2?

Steve Perry – I’d be interested. If it was a good script, it would be great fun. The script for Men in Black was terrific, I loved writing the tie-in for that one. The script for MiB II was not-so-good, and I’m glad somebody wrote the novelization.

Steve Perry – I haven’t seen the second AvP script, but I hope it is dynamite — a really good movie would re-energize the franchise, and I’d like to see that.