Well all know that old saying, ‘don’t judge a book by it’s cover’. But truth is, it’s the covers that makes us pick up the books in the first place. I had chance to sit down with Stephen Youll, english born artist who is the man responsible for creating the covers of the new Alien and Predator novels. 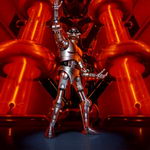 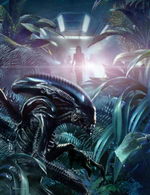 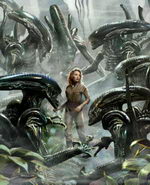 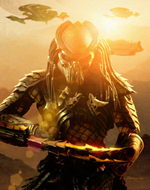 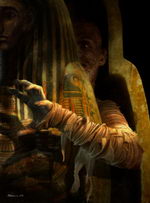 Corporal Hicks – What is it you do that’s related to Aliens / Predator?

Stephen Youll – I am producing cover art for a new line of Aliens and Predator novels Dark Horse is publishing, under the imprint DH PRESS.

Corporal Hicks – You’ve been interested in becoming an artist since your early childhood. How did this interest in art come about?

Stephen Youll – I was always drawn to the more fantastical of subjects. Weather it was in film or comic books or paintings. My need to create in that universe was in most part why I studied art and became an artist.

Corporal Hicks – You started paying your way through life by winning art competitions. What did that feel like? Exciting because you were capable of winning money using your talent or embarrassing because you needed to do it to get the money?

Stephen Youll – You should never be embarrassed about winning a competition for any reason. At the time I was 16 years old and the only thing that concerned me back then was art. Being able to pay for expensive art materials has to come from some where. My parents couldn’t afford them so I used the contests as a way to finance my love of art. A rich patron would have been preferable but at the time I didn’t know any.

Stephen Youll – It’s somewhat like being an archeologist in a way. It’s reconstructing a artifact that has decayed over time and showing what it may have looked like as new.

Corporal Hicks – When did you first start creating cover art for novels?

Corporal Hicks – What was the first novel you did a cover for?

Corporal Hicks – I’m a big fan of Asimov’s I,Robot. You’ve done a lot of covers for him. Did you ever meet him in person or discuss his work?

Stephen Youll – I met Isaac Asimov a couple of times just prier to his death in the early nineties but we never talked about work. Come to think of it I think I just said hello and told him what he loved to here the most – that he was a genius. He actually was as a matter of fact and remains one of my favorite authors.

Corporal Hicks – When did you first see an Alien or Predator film?

Stephen Youll – One of my all time favorite movies is Ridley Scott’s Alien. I saw the movie back in 1979. It scared the hell out of me. I saw Predator right at the beginning of my artistic career in 1987. Both movies have been huge influences on me.

Corporal Hicks – And you’ve been a fan since then?

Stephen Youll – I was hooked ever since I saw both movies.

Corporal Hicks – The Alien world is very artistically. People like Giger and Ron Cobb were involved in the creation, both famous artists. Do you ever look to people like those for inspiration?

Stephen Youll – I have admired both artists for many years and both have had a great deal of influence on me.

Corporal Hicks – How do you find the inspiration to do your art?

Stephen Youll – Inspiration comes from many places. The main place I look is to the novel or manuscript that I’m asked to create a cover for. Watching a good movie, looking at other artists work, Looking at your surroundings, anything that will ignite a spark to start creating and formulating an idea.

Corporal Hicks – How did you come to do the cover art for the new Alien and Predator books for Dark Horse?

Stephen Youll – I was asked by the editor, who was very familiar with my work.

Corporal Hicks – What sort of time and effort goes into creating the cover for a novel?

Stephen Youll – That really depends on the nature of the image and time available. I regard myself as being pretty fast at turning around an assignment and though some covers take longer to do than others because of their complexity, it usually takes me from a day to a week to complete a cover now. But a lot of research and study and preparation is done from the moment the job is given to you to the final completion of the work.

Corporal Hicks – When you’re creating a cover image, do you read the novel in question to pick out a certain part or do the publishers give you a certain idea and you have to build upon it?

Stephen Youll – I always prefer to read the story first, that way you can decide a number of things with regards to the cover image. However, lately due to a number of factors with regards to the selling and marketing of the book in advance, there isn’t a manuscript. It’s then up to the publisher and the author to help in any way to get as much accurate information as possible so you can at least get a feel for the story. With regards to the Alien and Predator covers I’m doing for Dark Horse, I talk with the editor in depth about possible cover concepts and what he wants to see on the cover. I then go back to my studio and get to work on it.

Corporal Hicks – So far you’ve done Aliens Original Sin, DNA War and Predator Forever Midnight. Which cover has been your favourite to create and why?

Stephen Youll – I really don’t have a favorite amongst them. I like each one for different reasons. The only time I don’t like something is if I feel I haven’t produced an interesting image that captivates the reader in to picking up the book.

Corporal Hicks – For the Original Sin cover, a lot of fans have mistaken it for a scene that was cut from Alien Resurrection, in some gardens. Was this intentional on your part, to make it look like the scene from AR?

Stephen Youll – I was really trying to create a cover that had a movie quality to it. I wanted these books to have a totally different style to the other novels that preceded these. The figures were taken from the movie Alien Resurrection as reference to do my cover. The book takes place right after AR and has the same characters. The shot I used was altered to fit my scene with Ripley and her crew inside a jungle like environment that takes place in the story. Originally I had offered a completely different cover idea with a much larger Ripley figure in the foreground and the Alien confronting Call behind her in this Jungle like setting. 20th Century Fox didn’t want to show Sigourney Weavers Face, as that would have lent to getting a likeness approval. We had very little time to get the cover into production so I was asked to come up with something that still showed Ripley but not large enough to warrant a likeness approval from Sigourney that would have really delayed the cover getting into production. I had to turn around the cover idea in a day. So for nothing more than time restraints and I needed a small shot of Ripley that was instantly recognizable as Ripley, even though we can’t see her face clearly. The shot came in very handy to capture what every one wanted. The scene works well in capturing the apprehension I was looking for in the figures. So Time and the availability of reference really factored in to using the shot from AR.

Corporal Hicks – You cover for Forever Midnight featured the Celtic Predator from AvP. Again, choice or asked to by DH? If choice, then why that specific predator?

Stephen Youll – For the first book I was looking for a bold image to sell the book. It was left up to me to put either Predator on the cover. I chose the Celtic Predator because it was the most current design and I just like it. The other books in the series will feature the original Predator Helmet as well as the Celtic Design. It’s all good to me.

Corporal Hicks – So far, on all your Alien covers, you’ve used the newer AvP alien design. Any particular reason?

Stephen Youll – Again it’s just a more current design. I did alter, very subtly the head and arms of the Alien in my covers but was told the changers had to be very subtle and within the Aliens design parameters. You can’t just go and change these designs to any great length. You still have to follow what’s come before. I also had much better reference shots from AVP than the other movies. It was more logical for me to use them.

Corporal Hicks – Are you working on any more Alien or Predator novels for Dark Horse?

Stephen Youll – I just produced a new Alien and a new Predator cover for Dark Horse and wait for approval from 20th Century Fox. Other novels will follow.

Corporal Hicks – Thanks for the opportunity to interview you. Any last words before we sign off?

Stephen Youll – I hope this interview has given some insight in to the way things work when producing a cover idea. I hope the fans of Aliens and Predator enjoy what I’m doing as much as I have enjoyed working on them.