We all love to play our AvP games. We all love to blast away Aliens with our Pulse Rifles, to rip off marine heads as Predators, and we sure love to get all cosy with people’s faces. But gameplay’s not where the gaming experience ends. Music plays a key part too. It helps create the mood, the tension and to get the heart beating. I recently talked with Rich Ragsdale about composing the scores for AvP1 / 2 / Extinction and Aliens Colonial Marines. 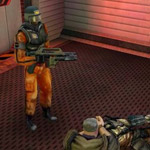 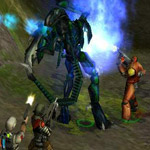 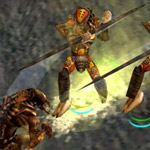 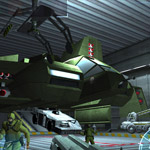 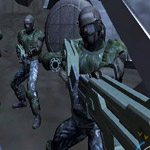 AvPGalaxy – Thanks for the interview, Rich. Before we get into any questions, can you tell those fans out there that might not know, what your connection to the Aliens and Predator franchise is?

AvPGalaxy – As a film maker yourself, I’m sure you have some appreciation for those behind the making of the Aliens and Predator films. Which one is your favourite and why?

Rich Ragsdale – Well, I feel like the original Alien is the best film of the bunch, both in concept and execution, though on a more visceral level, Aliens is probably the most fun. Most all of the films have a great deal of imagination and style behind them.

AvPGalaxy – While we’re on it, which score did you like the most?

Rich Ragsdale – On its own, I love Elliot Goldenthal’s score for alien 3, though it is mixed far too low in the film so you have to listen to the CD for the full effect. Functionally, Goldsmith’s and Horner’s scores are really great.

AvPGalaxy – You grew up playing video games, and unlike now, there wasn’t that much of a shortage of Alien games for you to play back then. Do you remember playing any Alien games?

Rich Ragsdale – I played the arcade Aliens game a few times, though not a whole lot I must admit.

AvPGalaxy – How exactly did you come to compose the music for the Alien vs Predator games?

Rich Ragsdale – I had written some music for Fox Interactive sports line, and I was good friends with Chris Miller, who gave me a good recommendation. So I met with Dave Stalker and we got along and had similar tastes so it seemed like a perfect fit.

AvPGalaxy – Both franchise how different musical styles. How did you blend all these together for game soundtracks?

Rich Ragsdale – Each character had their own distinct style. The marines had the big “praise the lord and pass the hand grenades” militaristic vibe. The Predators had a more percussive, ambiguously ethnic sound. real tribal stuff. The aliens had a more abstract spooky vibe. Theirs was the least melodic. I thought that since the gamer was playing a character that has a insect like brain, their music should reflect that to make the experience more immersive.

AvPGalaxy – What led to you working on the music for Aliens Colonial Marines and for AvP Extinction?

Rich Ragsdale – Well my relationship with the franchise, I suppose. And being friendly with the producers Chris Miller and Dave Stalker.

AvPGalaxy – Now Alien vs Predator 1 and 2 were very different to Extinction. AvP1/2 are first person shooters, while Extinction is an RTS. In an RTS, you’re obviously aware of almost everything around you, which could cause the game to lose some of the scare factor that an FPS might have. Does the type of game effect the way you compose?

Rich Ragsdale – For sure. Most RTS games at the time didn’t have music, but Dave Stalker wanted AvP: Extinction to be scored. The music for AvP 1 and 2 was very dynamic and active, and that wouldn’t really work for Extinction. So I created very long tracks that would be fairly ambient, or have very long, slow builds. The game didn’t do all that well, which is too bad, because I really liked the music for that game.

Dave was cool and let me write some really out there orchestral stuff, using a lot of extended orchestral techniques that I don’t think had ever really been heard in a video game before. There are not a lot of melodies in that stuff, that ‘s for sure, so nobody was gonna walk around humming this stuff, but as a composer, it was great to have that kind of freedom.

The Alien tracks in that game really stand out for me. I used a lot of woodwind multiphonics to try and emulate that bug mind thing. I played one of the alien character’s tracks for the composer Chris Young not too long ago, and his comment was “Wow, I didn’t know you could write music like that for a video game.” We even built some percussion instruments for the Predator character using skulls filled with giraffe teeth and turtle shell filled with small beads just to get a an unrefined, primitive percussion sound. So it was a lot of fun, even if it didn’t really get noticed.

AvPGalaxy – How do you go about creating tracks to create certain emotions? Does it involve using a specific set of instruments, a certain tempo – faster for the action tracks, slower for the suspense?

Rich Ragsdale – Fast frenetic stuff can really push the action along and helps create an uneasy agitated feeling. Lots of swirling strings and crashing percussion combined with bombastic brass passages just screams marines in the thick of it. But it isn’t always that cut and dried. Sometimes you just have to play it simple and stay out of the games way.

AvPGalaxy – I don’t know too much about video game composing but I’m sure it’s different from that of film composing. In composing for a film, you usually have the finished product to watch while your write, but in games you don’t. How does this affect you when you compose for a game?

Rich Ragsdale – Scoring cut scenes is pretty much exactly like scoring a film but game play is different. Different games require different approaches. For example, when we set out to score the first AvP, there wasn’t really any good way of syncing high quality musical scores with game play due to system limitations and space issues on the CD Roms (remember those?). Rather than create a cheesier midi based score, we opted for the second audio CD that you put in the drive after you installed the game.

So I tried to compose tracks that created the overall sensation of being in the movies. For the most part the tracks started a bit slow to allow the player to ease into the level and then build into something more tense and active. By the time we got to A:CM, these technical problems were less of an issue, so we could trigger high quality audio at any point in the game. So then you try to compose for specific moments as opposed to trying to create a vibe.

AvPGalaxy – Listening to the tracks available for Colonial Marines, it’s quite easy to tell it’s greatly influenced by James Horner’s Aliens score. Did you ever go back to the scores from the original films and look to those for inspiration?

Rich Ragsdale – Certainly. By the time I had gotten to A:CM, I was pretty well versed in all the Alien scores, and seeing as how the games are for the most part based on the second film, it is only natural that Horner’s score would be a guiding force.

AvPGalaxy – What sort of musical style where you going for with Colonial Marines? There’s hints of military music, plus those stringy crescendos you seem to love so much in AvP1.

Rich Ragsdale – Well certainly there was an overall military vibe. Lots of brass and snare drums. The music was sort of two tiered. There were suspense-y tracks that would be dark and ambient and brooding which would usually play near the being of a level or be triggered at strategic points in the game, and then there were the active action tracks that would start when the real action kicked in, like being attacked by hordes of Aliens or driving an APC.

AvPGalaxy – Colonial Marines was the game that just couldn’t quite make it. It was some time ago but you do remember much about it? Like why it was cancelled, what story the game followed, things like that?

Rich Ragsdale – It was canceled because the developers could make their milestones. I am not sure what I am allowed to say about it, but it was ambitious. It had some really great stuff in it and a bunch of stuff that was planned. I remember that their animations of the aliens dying was straight out of the films. It was really awesome.

AvPGalaxy – What sort of guidelines do you get from the developers when composing for their games? Do they have a lot of input before you start writing?

Rich Ragsdale – At my first meeting with Dave Stalker we discussed which scores he liked and disliked. I remember that we both really liked Goldenthal’s score as well as Goldsmith’s. He really hated the score to Alien 4. Once I started composing there was really very little interference. We were really on the same page as far as the music was concerned.

AvPGalaxy – Out of all the Alien vs Predator games you composed for, which has been your favourite?

Rich Ragsdale – AvP#1. It was my first after all.

AvPGalaxy – Fox recently released Alien vs Predator the movie a couple of years ago. Have you seen it yet? If so, what did you think?

Rich Ragsdale – Y’know, I honestly haven’t seen it, though I always planned to. I just haven’t gotten around to it.

AvPGalaxy – I don’t know if you’re aware yet, but Sega is going to be publishing two new Alien games. An FPS that is being developed by Gearbox and an RPG to be developed by Obsidian. Is there any chance you’ll be composing for these games?

Rich Ragsdale – I haven’t been approached by them, but I would be interested. Since I’ve been doing more film production gigs lately, I haven’t been as active pursuing game gigs, but given my history with the series I would think it would be loads of fun.

AvPGalaxy – Thanks for the interview Rich. It’s always nice to talk to people such as yourself. Before we finish, do you have any last comments?

Rich Ragsdale – Well, I really enjoyed being part of the AvP game franchise and it is nice to hear from the folks who enjoyed them.