As some of you may know a few years back a Collectable Card Game (CCG) was produced that was based on the Aliens and Predator Franchise. The CCG series was taken over by ZI Games after the sometime after the first set of cards was released and I was lucky enough to get to speak to Pierce Ryan, a member of the ZI Games design team: 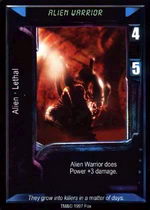 Corporal Hicks – Hi for all the viewers out there, what’s your name and what was your involvement in the project?

Pierce Ryan – My name’s Pierce Ryan, and I’m a member of the ZI Games design team, the same who were in charge of the AvP CCG Resurrection expansion, the unreleased Atmosphere expansion, and the more recent The Terminator CCG, of which I am very proud to have been a part of.

Corporal Hicks – Tell us a bit about the history of the project.

Pierce Ryan – the design team at Precedence, the same company that released the card games of Babylon 5 and Tomb Raider, originally created The Aliens Predator CCG. The premier set used themes and concepts from the first three Alien movies, and the two Predator movies overall, while focusing primarily on Alien and Aliens. The wonderful design team at ZI Games got to do the first expansion, and had finished the second expansion when (in a nutshell mind-you!)

Harper Collins decided not to make games anymore, and that was pretty much it unless someone manages to get the rights from them. I wouldn’t say the AvP CCG is dead, but it is in limbo. The AvP CCG has had a tough time selling itself to fans of card games because of how different it is from other CCG’s. One magazine put it best when they described this (And The Terminator CCG) as a role-playing card game. If you look at how these two games are played it’s pretty easy to understand it that way. Now whether or not people like that style is what has given the game a tough time drawing in new players.

Corporal Hicks – Tell us about the first set.

Pierce Ryan – Well as I said above, it took themes and concepts from Alien, Aliens, Alien 3, Predator, and Predator 2. Pretty much all of the weapons and items that you’ve seen the Predators use are actual items you can equip your own Predator with, and then some. The Naginata and Scatterguns are two items that haven’t been seen in the movies, but have been in various comics. For the Marines you can find and use Pulse Rifles, Body Armor, Smartguns, and several other things that came straight from Aliens, although like the Predators, there are items not seen in any of the movies that you can use.

Nerve Gas, and Scope Rifles are some examples. Character-wise, depending on which of the three main factions you choose to play as, the game incorporated a lot of movie characters and creatures like Cpl. Hicks, Pvt. Hudson, Ripley, nearly everyone from Alien, Alien Warriors, and the Alien Queen. In addition, there are many new marine characters to choose from, a few new aliens like Pred Hybrids and Royal Guards, and a slew of Predators of all skill levels to choose from for your decks.

As I said earlier, the game itself plays sort of like an RPG, in that you move from location to location, search for items and people, equip weapons, and battle other races in a giant space station with sometimes disastrous consequences (a Predator can start a hull breach with his plasma caster if he’s not careful, and end up taking out everyone in the area. Sometimes this is good, usually it’s bad!). Marines play to rescue civilians, Aliens play to Hive up the entire station, and Predators play to fulfill a particular level of Honor for their hunt.

Of course, any faction can just forget about such details and win the game by killing every other faction’s main characters. This is a game where you can create a deck that relies on intricate strategy to complete a goal before an opponent can get to you, or one where you can bull rush them and take them out with sheer force. The great thing about AvP is that even if one style doesn’t go your way during a game, you can sometimes improvise and still play a completely different style than what your deck was designed for.

Corporal Hicks – And the first expansion was based on Alien Resurrection? What changes did the expansion do to the game?

Pierce Ryan – To say the least, the Premier set had a number of problems with the rules, vaguely worded cards, and loopholes galore. When ZI Games got a hold of the game for the expansion a new rulebook was written, in which one of the biggest changes made was to the turn order. No longer could the Predator move after the Alien player, allowing it to move out of the threat range of claws, because the Aliens now move after everyone else. This fixed a great number of problems.

Another big change was to the scenarios that game play followed. Countdown, the official Alien: Resurrection play scenario, added location decks in addition to your play deck, from which locations were pulled and put into play every turn. This helped to speed games up (a problem from the Premier set, where you only played locations when you drew them from your deck). Besides these things, there were just a large number of game play and rule changes and a small number of card errata that was introduced to streamline game play, and it all worked well.

The expansion itself brought in the main human characters from the movie, and introduced three new factions to play as; Cloned Aliens (as opposed to Hive Aliens) that couldn’t create hybrids but had a number of genetic improvements that could be played to boost their abilities, Predator Packs, a group of two or three young hunters that used low level weapons and items to gain their warrior status, and the Rogue faction, whose goal was to steal and pillage and stay out of battle at all costs.

If they were faced with fighting, though, they could attack with concealed weapons during movement and get out while their enemies were recouping. Furthermore, a handful of new Predators were made, and a few new Predator items including Hunter’s Casters (a toned down Plasma Caster that Packs could use), and Venom Cloud Modules, a gas canister that can deal environmental gas damage to everyone at a particular location.

Corporal Hicks – Apparently two new expansions where due out: Atmosphere and Cityscape. Tell us about those expansions?

Pierce Ryan – Atmosphere was going to be based on the movie Predator, which introduced another handful of new Predators (including a sneak peak of another new Predator caste known as the outcasts, vicious killers with no desire to keep or gain any honor in their hunts), a few new Predator items, several new aliens, and best of all, the toughest marines this game had seen yet. Major Dutch was a marine so powerful and skilled that he was nearly broken as a playable card.

The rest of his team all had very useful and interesting skills as well. Beyond characters, the game was going to introduce outdoor locations, trap items for all the factions, and vehicles finally! This expansion was complete with a new game scenario to use when playing, and it was the most challenging and intense one yet. It was days away from printing when Harper Collins decided not to make games anymore, and the expansion fell into limbo.

Cityscape had been talked about, but nothing concrete had actually been done for it yet. Plans were to base it on Predator 2, bringing city locations into the game, and new Rogue characters based on those seen in the movie itself. Beyond this there really wasn’t anything set in stone since the design team was busy trying to make Atmosphere the best expansion it could be.

As of now, if you want to have Aliens and Predators duke it out in a city, your best bet would be to use locations from The Terminator CCG, which is 100% compatible with AvP (don’t mean to plug that again, but try picturing a Predator stalking its prey down the city streets of LA while Aliens spawn in the sewers, or imagine a pack of young Predators brawling it out with a Terminator in a parking garage. It’s great stuff!).

Corporal Hicks – What actually happened to these expansions?

Pierce Ryan – See above. I can’t say that the game is dead, but it’s kind of stuck right now. Maybe if the new movie does well enough we’ll see something happen? Still, the game is as fun as it’s always been, and there are a large number of very dedicated players that still play it regularly.

Corporal Hicks – How popular was the game?

Pierce Ryan – It was always difficult trying to draw new players into the game because of how different it was to play. A substantial rulebook turned others off. But people who were able to get past these things found a game that had an amazing amount of strategy, a huge amount of variety in playing in the form of 6 different factions, and a game style that could be changed completely depending on the scenario you used when playing. It might not have had as huge a fan base as other CCG’s, but the fact that after all these years the players are as dedicated to this game as ever definitely says a lot for its popularity, me thinks.

Corporal Hicks – If it was rather popular why was the game cancelled?

Pierce Ryan – It was never canceled, it was just…stopped. I’m not really sure how to put it. Atmosphere is still ready to be printed, the design team is still around, and Harper Collins still owns the rights to the game. The problem is, nothing’s happening. So popularity had nothing to do with this situation, it all came down to a business decision (not our own, mind you).

Corporal Hicks – Any chance of the game being picked up again, considering the new merch and film due out?

Pierce Ryan – If there’s one thing that talks, it’s money. If the movie does really well, I wouldn’t be surprised if something happens. We were talking about redesigning the Premier set again after the expansions anyway. Whether or not the AvP CCG we all know and love is brought back, or a brand new one is designed, I have no idea, but anything’s possible. Heck, just a few years ago the very idea of an AvP movie being made seemed like a hopeful fanboy’s dream, and yet here we are with it coming out in just a couple of very short months. So who can say, you know? Here’s to hoping!

Just before I sign off, though, I want to give a special shout out to the wonderful guys and gals at ZI Games. They are by far some of the greatest people I’ve had the pleasure to work with, and the best part is, they all really care about the fans. We’re always thinking about ways to please the players during the design process, and best of all, we all love talking with you all.

Talking to the players about the games we love is one of our greatest rewards. Lastly, I want to thank the head designer, a great guy who went by the name Pestilence. He was such a smart, patient, incredibly fun guy to work with, and it was a real honor to have been invited by him to join in this line of work. Thanks Mike, and thanks ZI Games. Now let’s all go play some AvP, eh? Take care everyone! Have fun.