Dark Horse Press released the first original, english, Alien novel a couple of months ago. It was the first Aliens novel for at least 5 years and was written by the popular Star Trek author, Michael Jan Friedman. I got the chance to ask him a few questions regarding Aliens Original Sin. 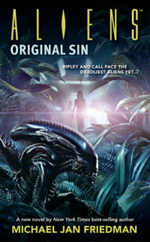 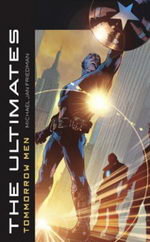 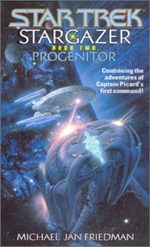 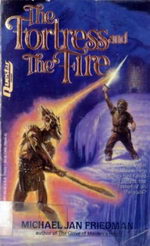 Corporal Hicks – First off, thanks for agreeing to this interview and can you tell us a little about yourself?

Michael Jan Friedman – I’m a husband, a father, a dog owner, a coach, a person responsible for a very large mortgage, a New Yorker, a registered Democrat, a jogger, a sailor, a fencer, a handball player, a baseball enthusiast, and the author of 62 books…of which Original Sin is the 62nd.

Corporal Hicks – Can you tell us a little about the story of Original Sin?

Michael Jan Friedman – It picks up where Alien: Resurrection left off, continuing the stories of the Ripley clone, Call, Johner, Vriess…and of course, the aliens.

Corporal Hicks – How did you come to write the novel?

Michael Jan Friedman – My friend Rob Simpson was given the job of editing the Aliens line. I had always loved the Aliens movies, so I jumped at the chance to write a book based on them.

Corporal Hicks – In our last interview with John Shirley, he spoke about his ‘bible’ with the guidelines from Fox. What guidelines did Fox and PH Press set you? Did you also have a ‘bible’?

Michael Jan Friedman- There were some loose guidelines, but what I got was mainly just helpful information. At no time did anyone say, ‘Oh no, you can’t do that.’ But if they had, I’d have been fine with it, having worked with much more structured licenses like Star Trek.

Corporal Hicks – Original Sin is essentially our Alien 5. There are many different theories and story ideas for a potential A5 film. Did you look for any ideas or inspiration from fansites and forums?

Michael Jan Friedman -Can’t say I did. Mind you, I’m not really hooked into Aliens fandom yet, so if there was stuff going around, I wasn’t aware of it.

Corporal Hicks – I haven’t actually read the novel yet, but from the online preview I’ve read, Johner seems a lot like Jayne from [Joss] Whedon’s Firefly. Did you watch other Whedon films and series to see how his characters might have evolved?

Michael Jan Friedman – I saw and liked Firefly on TV, but have yet to see it on film. I honestly didn’t give much thought to Whedon’s style. I just picked up the character, whom I loved, and ran with him.

Corporal Hicks – What sort of research went into writing the novel?

Michael Jan Friedman – Of course, I watched each of the films a few times (not a bad life, I know), and pored through the internet for scripts. But that was really it. I wanted all of my sources to be primary.

Corporal Hicks – Since this novel is the first ever original (No pun intended) english, Alien novel, did you feel any sort of pressure while writing it?

Michael Jan Friedman – A little, but that was the fun of it. I could have gone in a different direction, without Ripley and the other established characters, but it was more of a challenge to advance the franchise. I think that’s what people really want to see.

Corporal Hicks – From reviews I’ve read, it seems the original encounter with the Nostromo was set up. By the Company and the Jockeys. Where did that idea come from?

Michael Jan Friedman – As I watched and re-watched the first movie, it became obvious that it couldn’t have been anything BUT a set-up.

Corporal Hicks – This novel has been out for several months now, are you pleased with fan reactions and reviews?

Michael Jan Friedman – Generally, the ones I’ve seen and heard have been good. I was a little surprised that some readers were hoping it would simply be a Colonial Marines shoot-’em-up. I wanted it to be more thoughtful than that, and also to set the stage for additional Ripley clone novels.

Corporal Hicks – Did you ever talk to any of the authors of the other novels, or even read them, while writing this novel?

Michael Jan Friedman – No. As I said, I wanted to depend on primary sources as much as possible.

Corporal Hicks – What is your favourite Alien film and when did you first see anything to do with the Alien franchise?

Michael Jan Friedman – My favorite film is the first one. It was pure, unadulterated horror, a nearly perfect little movie. That was my first exposure to the franchise–seeing Alien in a theater somewhere. Of course, back then, I didn’t know it was going to be a franchise. I don’t think anyone did.

Corporal Hicks – You are a well known and popular ‘Trek writer, what other novels have you written beside thoses?

Michael Jan Friedman – Besides my 35 or so Trek books? A lot of other media tie-in work, from the novelization of the Batman & Robin movie to Lois and Clark to Justice League Animated to Wishbone. I’m currently working on a Universal Pictures’ Wolf Man project for Dark Horse, and I just finished a novel based on Marvel Comics’ Ultimates title, called The Tomorrow Men. I’ve also done some original fantasy fiction, though not recently.

Corporal Hicks – What do you do when you’re not busy writing?

Michael Jan Friedman -I like to spend with my family. Occasionally, I’ll also do something to stay in shape (see my first answer, up above).

Michael Jan Friedman – I’d very much like to pick up the Aliens thread. But I also want to tackle the Predator mythos, so that will probably come first.

Corporal Hicks – Once again, thanks for answering these questions. Any last words, extracts, free review copies…:-)

Michael Jan Friedman – It was my pleasure to be your guest here–thanks for your hospitality. I sincerely hope fans continue to enjoy and be intrigued by Original Sin, and want to see more of the same.