Márcio Napoli is the writer, director and producer of the recently released short film Aliens: LV-426 which features Newt returning to LV-426 ten years after the events in Aliens. She finds Bishop and recalls what happened all those years ago. The short film is almost 11 minutes long and is in Portuguese with English subtitles. Fortunately, we got the chance to speak to Márcio about how he created this amazing short film. 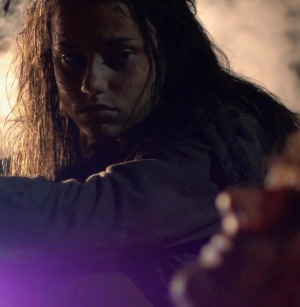 AvPGalaxy: Hey there. Thanks for doing the interview. Now, your background is mainly photography. How did you get into that? Is Aliens: LV-426 your first short film?

Márcio Napoli: I’ve always loved the American culture, specially Hollywood movies. Always. Since day 1. About 10 years ago, before becoming a photographer, I had that dream to provoke a revolution in the Brazilian’s movie industry (which is extremely backwards), proving that even the lowest budget, home made film, literally dreams bigger than the entire Brazilian’s movie industry. And so I produced an amateur movie, called “Ceus de Fuligem”, with lots of will, special effects, and minimal budget (my bedroom became the chroma key studio). It was very successful at the time, opening up an interview at Jo Soares (Brazilian’s most important Talk show). Unfortunately, nothing happened after that (which is expected living in Brazil), but I’ve always kept that dream alive. After 8 years since my last short film, I’ve decided to give another go. That’s how LV-426 was born.

AvPGalaxy: How did the project start? How did you get the idea to do an Aliens short film?

Márcio Napoli: It all started for fun. A hobby and nothing else. I’ve always loved the Alien franchise (along with everything James Cameron touches), and had met this talented group of actors about a year ago. We were already friends, filming some other stuff, but there was always this plan to do some sci-fi stuff. Considering our lack of budget, many production things had to carefully allign to make it work. One evening, during a photoshoot in a rut, I said to myself “hey, what if 2 characters were talking in front of a crater? This rut location looks like an alien planet!” That’s how the plot was born, and the production details magically felt into place. Why did we choose Aliens, exactly? I love Aliens! I’d do anything to get closer to a franchise I love so much. And by that time, I was watching Aliens on my blu-ray player like 6 times a week. Let’s say it all felt like the right decision to make: 2 characters, 1 location, and a plot that just seemed right. 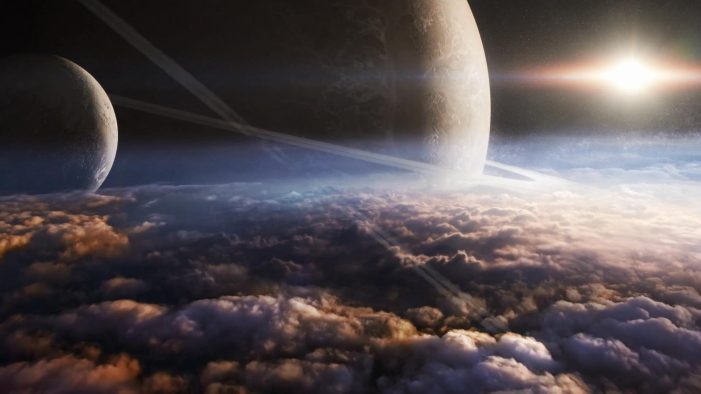 AvPGalaxy: For those that haven’t seen the film yet, what’s the story about?

Márcio Napoli: It’s basically a non-canon version of Newt and Bishop, both alive, 10 years after the events depicted on Aliens. Newt gets back to LV-426, finds Bishop buried in a crater, and they both remember the tragic events that happened 10 years before. It’s in no way an attempt to be canon. The way this film shows it, Newt was not even in the colony LV-426 when things got nasty. It’s somewhat a different version of the 1986’s characters. In the end, it’s just a way we found to stay closer to the franchise and characters we love, without any intention to be canon.

AvPGalaxy: How did you manage to fund the film?

Márcio Napoli: It’s cheesy to say, but love funded this film. No one got paid, including me. I’ve worked 10 months in the post-production, and got zero payment, but that doesn’t matter. What matters is the love we felt being closer to this franchise for a whole year. Also, it’s being a tremendous success on the internet. That alone is enough payment for me, and I believe the actors are equally satisfied. 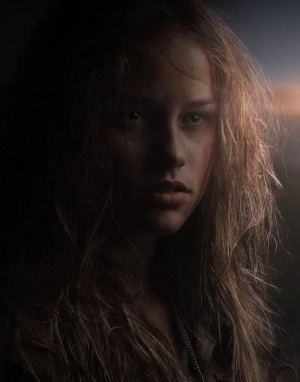 AvPGalaxy: I thought Luiza Greca was an excellent choice for the role of Newt. How did you cast her?

Márcio Napoli: She’s amazing, isn’t she? Gorgeous looking, a beautiful person, and an extremely professional and talented young actress. What more could I ask for? She’s amazing for sure. Here in Santa Catarina (which is in South Brazil), there’s a very small market for actors and videomakers. Everyone knows each other, so our cast already knew her. It’s was amazing that she accepted, and I feel truly honored to have such a talented actress on our film. I wish Hollywood opens up some doors for her. She’s THAT talented.

AvPGalaxy: I agree. She’s a very talented actress. Tell us about what was involved in filming Aliens: LV-426. Where was it shot?

Márcio Napoli: Principal photography was done on a rut location located nearby, from 6 PM to 4 AM of the following day. Chroma key sequences were shot on a studio. And just for fun: the execution scene was shot on my garage. A very dark environment and shallow depth of field can make wonders for a low budget film.

AvPGalaxy: The cinematography is particularly impressive. How did you go about creating that specific look? What camera did you use?

Márcio Napoli: Thanks a lot!! I really appreciate that. We shot on a little Panasonic GH2, with basically a 50mm f1.4 Nikkor mounted though adapter. Considering the low light scenes, and the small Micro Fourd Thirds sensor, the only way to do it was glue the lens at f1.4. Another fun fact: The backlight on the actors hair is a proper lighting gig, but the main light on their faces, is my car headlight.

AvPGalaxy: The CGI at the start of the film with the ship entering the planet’s atmosphere looked especially well done. How was it accomplished?

Márcio Napoli: Thanks again !! Those CGI shots are not that detailed, actually. If you look the original models closer, they’re actually pretty basic. What you see there is mainly a good use of lighting, and proper use of shadows to give both “tone and atmosphere”, and to hide CGI flaws. But thanks again, I appreciate a lot ! 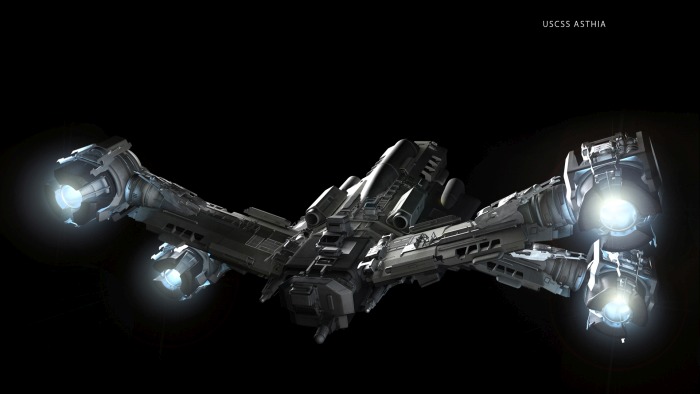 AvPGalaxy: I noticed the music in the film is from Elliot Goldenthal’s Alien 3 score. What made you decide to use his score?

Márcio Napoli: Elliot’s score is such a work of art, that I felt I had to use it. At some point, I thought of using Prometheus score, but in the end, Elliot’s Alien 3 score was just perfect on all levels. That’s something many Alien fans have already said: Alien 3’s score is the best of the whole franchise. Elliot, I hope you don’t get mad at me for using your score, but I had to do it! It’s such a masterpiece!

AvPGalaxy: How long did it take overall to make the short film?

Márcio Napoli: It was about a month to write the screenplay and storyboard. About 4 days shooting the live action scenes, and 10 months of CGI, editing and post-production. That’s a long ride for an amateur film, but certainly worthy it. 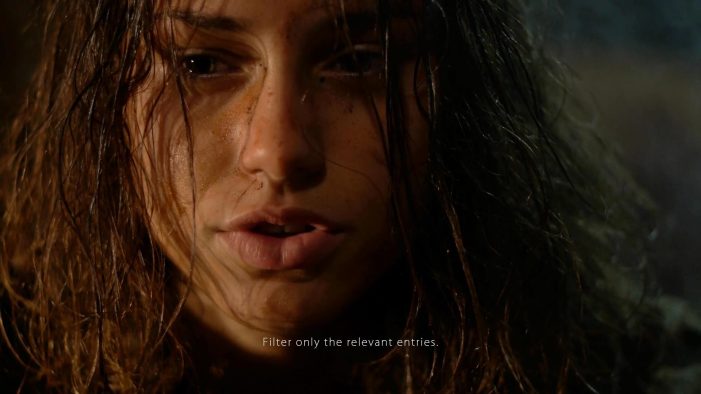 AvPGalaxy: Did you learn any important lessons while making Aliens: LV-426?

Márcio Napoli: Lots of it! Since my last film 8 years ago, I wanted to see what could be done with modern computers, techniques, cameras and a more serious attempt at storytelling. Specially happy about the storytelling, that I’ve always wanted to try an attempt at drama and sci-fi / fantasy. I’m sure this film has lots of faults, but overall I’m pleased with the results. There are things that would work better if done in a different way, but that’s how things go in life, we always gotta try to improve.

AvPGalaxy: Do you have any favourite moments in making the film? What process did you enjoy the most?

Márcio Napoli: I’ve just loved the principal photography night! In fact, it was a dream come true. I kept saying to the crew: “guys, we’re doing ALIENS!!! How awesome is that!!! Can you believe it? Yeah!” For a bunch of crazy, passionate Aliens fans, it was THE night to remember. But so many things were also awesome. 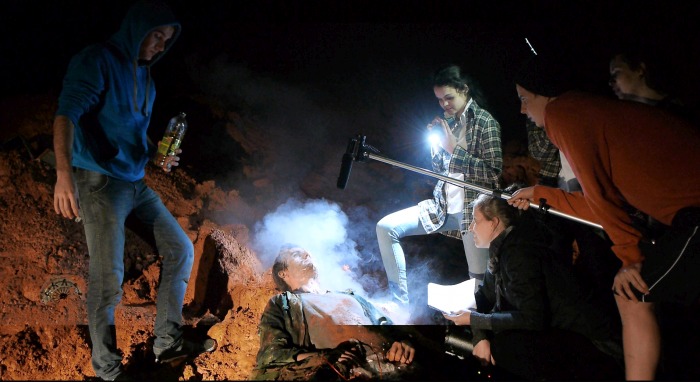 On Location with Sergio Barreto

AvPGalaxy: Is there anything you would do differently if you had more time and money?

Márcio Napoli: Ah yeah, for sure! Storytelling always takes the hit when you don’t have budget. The story itself could evolve to a more complex situation, not staying the whole film on 2 characters talking. We could see more of this world. We could see more production value, more movie length, etc. Even simple things, like a camera moving around (travelling), could add to a more dramatic approach. The thing is: even a camera travelling around is not just a simple, visual gimmick. When done right, it adds to the narrative. It adds layers to the storytelling. These things we didn’t have access to. But one thing is for sure: even if we had more money available, the plot would still be minimalist, and focused on the drama and pain of 2 characters. I’ve always been a believer of “less is more”.

AvPGalaxy: What’s the feedback been like from people or even just fans of the Alien series? Has it all being positive?

Márcio Napoli: We’re amazed at the reception this film is getting so far. It’s awesome to say that most of the comments are from Americans, and many other foreign countries. We’re extemely pleased with that. Most of the feedback has been positive, but even the negative feedback has been constructive criticism… A huge thanks for all the international support. Thanks a lot, guys! 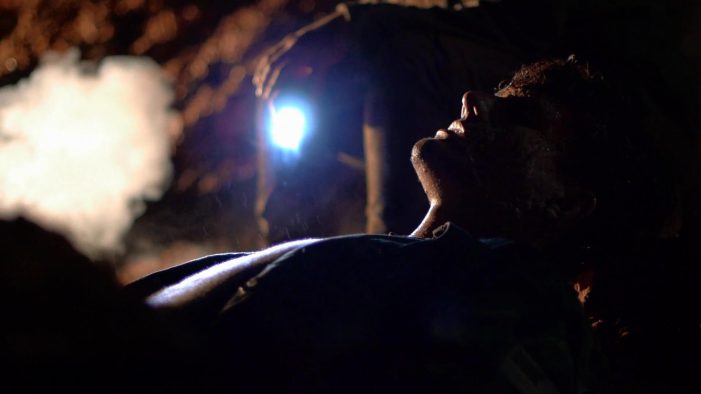 AvPGalaxy: What are you working on next?

A) Hollywood receives the message that people still love the Alien franchise, and we really want Alien 5 to happen. If possible, directed by James Cameron.

B) the Brazilian movie industry should learn a lesson or two with this short film. If a small crew, with zero budget, dreams big, why can’t you, Brazilian cinema?

That’s a message I want our national industry to hear. I also hope this film opens opportunities for the cast, specially Luiza Greca, Sergio Barreto and Stephanye Tavares. Very talented, young actors. Thanks a lot for the interview, guys! It’s a pleasure, thank you very much.

On Set in Garage

On Location with Sergio Barreto