Alien War is a total reality experience that first appeared in the UK, in Glasgow to be specific in 1992. It’s sort of like a theme attraction but based around Aliens. It had a lot of success and then opened in London in October 1993 but the attraction closed there after a flood in August 1996. It returned for a short time between December 1999 and January 2000 in Glasgow. A few weeks ago it was announced that it was coming back and will have attractions around the world. We interviewed the creator of Alien War, Gary Gillies. 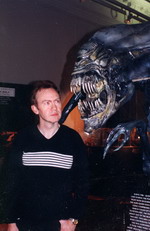 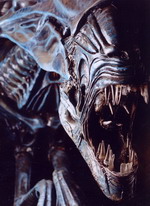 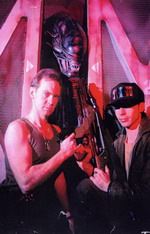 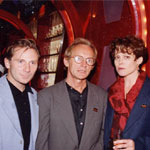 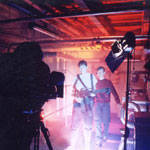 AvPGalaxy – Well I’m here talking to Gary Gillies, one of the men behind the Alien War attraction. Can you tell us a little about yourself?

Gary Gillies – I am a musician and producer and I have been getting side-tracked over the years with various projects, film, videos, exhibitions, and Alien War.

AvPGalaxy – For those who don’t know, what exactly is Alien War?

Gary Gillies – We pull you from the safety of your armchair at home or the cinema, and instead of watching an Aliens movie we put you in it for 15 minutes! This time its you going down dark Smokey tunnels with the threat of an attack from above, below, you don’t know where and all you have to protect you is the Marine (our actor) who will protect the group you are in and hopefully get you out to safety??

AvPGalaxy – Where does the story of Alien War fit into the movies?

Gary Gillies – It is based on Aliens although we have our own version we do, you are going on a tour of a top secret Weyland-Yutani facility when the creatures break free from their containment chambers.

AvPGalaxy – Where on earth did you get the idea to do an attraction such as this?

Gary Gillies – My friend John and I loved the movies and we had a mini exhibition at a cinema here in Glasgow with some props and photos and at the end of the exhibition we thought ” lets take it a stage further rather than looking at objects in glass cases lets have them up and walking about!

AvPGalaxy – It must have been difficult making your dream a reality. How did you actually get the project off the ground?

Gary Gillies – I contacted “Fox” in LA and managed to with some smooth talking making out I was a big VIP from Scotland got through to the President and told him the idea, he loved it and asked to see some plans which we faxed over to him and a couple of weeks later we did the deal with “Fox”.

AvPGalaxy – Fox is notorious for being very protective of its products. Did you have to go through them when you decided to make Alien War? Did they have a lot of involvement when you ran the project?

Gary Gillies – We wanted to do it right so that’s why we went to “Fox” although they thought it was a crazy idea that had never been done, yes there was rides etc at some of the theme parks but not something that put the public on foot so they left us alone as the first Alien War was to open in Glasgow so if it failed it would not matter to “Fox” different if it was in London or LA so they left us to it, we had nothing from “Fox” no costumes of any kind, props nothing so we put on a basic show but made sure we targeted the most terrifying thing which is always overlooked by the theme parks, they hand you everything on a plate and miss out to target the..imagination, hit the people where it hurts, dark rooms, enclosed spaces etc!

AvPGalaxy – Alien War had some authentic looking props. Did you get any directly from Fox or did you have to make them all?

AvPGalaxy – Where did you find the time and the money to create this? Was Alien War done around your jobs or…?

Gary Gillies – We got the money from 3 local business men to start with then when London came along we had to get a bigger budget so we approached a business man in California who ran a construction company and we brought him over to the UK to see the Aberdeen one we had and as soon as he saw the queues and the response we had from the public backed London.

AvPGalaxy – How did you recreate the feel of the original movies?

Gary Gillies – We went to Pinewood studios and managed to find a lot of original set, vac pieces of set, right down to stickers, then went to Bapty who made all the weapons for the movies and they made us the armour and pulse rifles, this you will see when the documentary comes out all about Alien War we have some amazing footage!

AvPGalaxy – I believe Alien War originally shut down due to flooding?

Gary Gillies – We sold the company on and the new owners were about to open it when all the pipes burst inside the base and ruined the whole set, they got a nice cheque from the insurance company and thought why bother opening the attraction lets retire!

AvPGalaxy – And you’re now back, after all these years – and a limited opening in Glasgow in 2000. Why now? Why not several years ago when Alien vs Predator was released?

Gary Gillies – I was too busy with some music projects and John was working in film and TV. This year it is Alien War 15th anniversary we thought we got to bring it back.

AvPGalaxy – Are you making any changes to the attraction this time round?

Gary Gillies – We are more experienced now and will make sure the experience will be more terrifying than ever before.

AvPGalaxy – Technology has advanced significantly since you created the first Alien War. Has this helped you in recreating the attraction?

Gary Gillies – Not really, as I have said basic things terrify people simple is best you could go crazy and put in all these amazing special effects but it would probably loose its “Soul” if you know what I mean?

AvPGalaxy – The original Alien War was a UK exclusive. Why have you decided to go worldwide for the relaunch?

Gary Gillies – Its always been something we have wanted to do take it on tour world-wide, its not fair to keep in based in the UK.

AvPGalaxy – How is that going to work? I mean, are you building separate Alien Wars in other countries?

Gary Gillies – We will start with one but if the demand is such we will build another couple.

AvPGalaxy – The release of Alien vs Predator saw younger people joining the fanbase. Are there any age restrictions for Alien War?

Gary Gillies – Yes no children under 8 and from 8 to 12 must come in with an adult.

AvPGalaxy – Will any of the old [Alien War] actors be returning this time round or is everything completely fresh?

Gary Gillies – Yes I am a loyal guy and we will welcome back some of the old team with some new fresh faces.

AvPGalaxy – When are you planning on opening the attraction?

Gary Gillies – In Glasgow this July.

AvPGalaxy – Will we be seeing any media hype leading to the release? Photos, videos, a Website? That sort of thing?

Gary Gillies – The documentary will be coming out along with the usual press/media hype.

AvPGalaxy – A big thanks for the interview. Before we sign out, any last words?

Gary Gillies – This time its WAR