Boil, boil, toil and trouble. Fire burn and cauldron bubble. Who doesn’t know that Shakespeare quote? Who knows that the way I just wrote it was wrong? Either way, it doesn’t matter because you’re not here for a literacy-history lesson. You’re here to read an interview with the “witch” who’s been stirring the cauldron. The novel Aliens Cauldron, of course. I recently had chance to sit down with Diane Carey, the author of Aliens DNA War and the upcoming Aliens Cauldron. 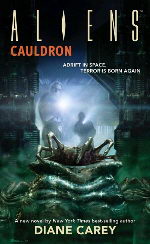 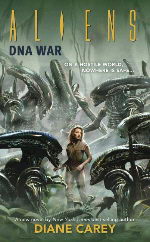 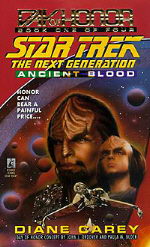 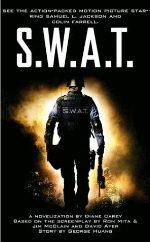 Corporal Hicks – Welcome Diane. It’s great to get to talk to you. First off, tell us a little about yourself.

Diane Carey – I’m a girl. Little enough? But seriously, folks . . . I was born and raised in Flint, Michigan, now living in a small town nearby with the hubby, Greg Brodeur, and the kids, Lydia, 23, Gordon, 19, and Ben, 12. Ben is adopted from Guatemala, and since we are a multi-race family we participated heavily in passing the Michigan Civil Rights Initiative to stop race/gender preferences in state government education, hiring and constracting. The basic philosophy is that we don’t believe it’s American or even moral for our children to be told they have different rights from each other based on skin color and sex. We formed an advocacy group, Race Free Zone, with a support blog, RaceFreeZone.com. Everybody go have a look.

Otherwise, I’m about to start my 47th book, which I won’t talk about until it’s actually under contract. I’ve written 29 Star Trek books, 2 Alien books, two Civil War novels, a series of Young Adult books about teenagers involved in emergency rescue and police work, and various other novels, a few short stories, many articles, and was a columnist for a year. I also sail tall ships, and am a watch officer, deckhand and training officer aboard several vessels, including the Highlander Sea out of Port Huron, the Virginia out of Norfolk, the Pride of Baltimore II out of Baltimore, and the Half Moon on the Hudson River.

I’m a Highland bagpiper, and going back into competition with Flint Scottish Pipe Band this coming year. Very excited about that.

Corporal Hicks – You’re writing your second Aliens novel now so I’m going to go a head and assume you’re a fan of the franchise ;-). How long have you been a fan of Aliens?

Diane Carey – I became a fan when the second movie was released. “Aliens” instantly became my favorite adventure movie because it didn’t try to just be a re-tread of “Alien”; it was a completely different genre””adventure thriller instead of horror. I’m a fan not only of the movie itself, but of the formula the producers and writers used. Too many sequels try to rehash the winning formula, and too often fail because of that. “Aliens” is an excellent example of how to do a series right.

Corporal Hicks – Can you tell us a little about the story of Aliens Cauldron?

Diane Carey – I was serving on the Schooner Virginia in Chesapeake Bay, taking a crew of cadets to Yorktown, where George Washington made his decisive victory that gave us our country. The cadets were good kids and learned everything we tried to teach them, and the captain and crew were wonderful shipmates. I still serve that ship, and just returned from another voyage last November. We got along so well that the crew and cadets came up with a plot for an ALIEN book. Now, this happens to me all the time – “Hey, I’ve got an idea for a story!” Uh-huh . . . except that this idea wasn’t bad at all. It hadn’t been done yet in the ALIEN universe, posed some fresh perspectives, and stood the test of time (meaning I didn’t forget it). The story involves a shipful of cadets coming up against some smuggled aliens and dealing with the ghastly creatures in their own spontaneous ways, and kids can be pretty creative.

Corporal Hicks – This is your second Aliens novel for DH Press. How did you come to write Cauldron? Was DH Press impressed with your work on DNA War and invited you for another round in the sandbox or did it happen another way?

Diane Carey – Mike Friedman and I are fortunate to have moved from Star Trek to Aliens, despite how tricky it can be to jump from one licensed property to another. It’s very hard (I know everybody thinks it’s easy) to work with an owned property, especially one like Aliens, which is “alive” and gaining new audience. When Dark Horse asked me to help launch the Alien line, we all knew I’m not a one-trick pony and would want to do more than one book. They also want proven authors who have more than one book in them. Since I’m on my 47th, I guess I fit that description. I’m also a fan, which helps, so I didn’t have to learn the universe from scratch.

Corporal Hicks – How has having worked on DH Press with DNA War helped you with Cauldron? Were they able to trust you more easily?

Diane Carey – Yes, of course that’s a factor. Although I have to say the editorial process has been a breeze. The editors are terrific, and as authors go I’m fairly easy to work with, always willing to change things or find a third alternative. DNA WAR went without a hitch””I don’t think there was even any editing. The funny part about CAULDRON was that I sent in a proposal, and time passed so I pretty much forgot about it. Suddenly I got a call from the new editor, who said, “Yes, I’m working on the cover copy.” I said, “What cover copy?” She said, “For CAULDRON.” I said, “You mean . . . the kid plot?” The book had been approved and nobody told me! I said, “Well, I guess I’d better write it then!”

Corporal Hicks – Being an experienced Star Trek author, does shifting from a franchise such as that into the dark and rusty world of the Aliens franchise effect you when you’re writing or coming up with novel pitches?

Diane Carey – Shifting from Star Trek to Aliens didn’t ruffle me a bit. I’ve done dozens of books, articles, screenplays, novelizations, on several subjects. I can write a historical in the morning and a non-fiction at night, or jump from the 1700’s to the 2500’s without a blink. Part of being a professional is being able to control yourself. Think of an architect building a church, and next week building a bridge.

Corporal Hicks – DNA War was the first Aliens novel to be told from a first person perspective. Why did you decide to tell the story like that?

Diane Carey – My first Star Trek book was also first-person, as was one of the (choke) romances I wrote way back when. These have been two of my most popular books. First-person is very hard to manage, because the writer only has one perspective, but I find it easy and unique if done right.

Corporal Hicks – Will Cauldron be first person as well?

Diane Carey – No, Cauldron is from multiple points of view.

Corporal Hicks – When is Cauldron set?

Diane Carey – In the future. (Beats me.) I guess in the Alien time frame, it’s after space travelers have been alerted to the existence of these creatures and there’s a no-transport law.

Corporal Hicks – From the sounds of Cauldron, it has some throwbacks to old Alien comics. Corrupt military men, smuggling ships and etc. General Spears from Steve Perry’s [Aliens] Nightmare Asylum springs to mind. Did you get any inspiration for the story from the older comics or novels for that matter?

Diane Carey – I’ve never read an Alien comic, or any other Alien book.

Corporal Hicks – One of the prominent parts of DNA War was the character conflict between Rory and Jocasta. We know from the synopsis that a corrupt captain is “abusing” his marines. Will this conflict be prominent in Cauldron?

Corporal Hicks – At what stage is Cauldron? Has it been finished yet?

Diane Carey – It’s done and in production. My part is over, except for signing autographs! (Hint)

Diane Carey – There are two ships, two captains, two different manners of command, and two theatres of action happening at the same time. Some of the characters are adults, and others teens, so there are different approaches to handling the sudden appearance of the aliens.

Corporal Hicks – Will Cauldron tie into any of the films or DNA Wars? Either by characters or referenced situation?

Diane Carey – That’s up to the studio. As far as the plots, they’re free-floating in the Alien universe, not hooked to a film.

Corporal Hicks – We know that Cauldron involves some form of the military but will this be an existing organization such as the marines or a completely new one?

Diane Carey – Actually, I don’t think the military is involved anywhere in CAULDRON. Guess I’ll have to read it and see.

Corporal Hicks – Will Cauldron be adding anything to the mythos of the Aliens?

Diane Carey – Since the property is owned, there’s only so much authors can do, but there are some suggestions of new traits and new relationships between the aliens, humans, and other animals, for sure.

Corporal Hicks – DNA Wars has been out for sometime now. Are you pleased with the fan reactions so far?

Diane Carey – Very pleased. Readers like the character relationships and struggles, because the humans, of course, are the real story.

Corporal Hicks – Looking back at the novel now, is there anything you would have liked to change?

Diane Carey – No, I got a chance to make the last few changes just before the book was published. There was one sentence I wanted to get in, and it got in.

Corporal Hicks – Having talked to you and Bob Greenberger, you both have different approaches to writing a novel. How exactly do you write and edit your novels?

Diane Carey – I get together with my husband, Greg Brodeur, and we ask, “Okay, why would anybody read this book? What’s a good reason to open an Alien book?” Once we find that reason, we build a plot. We send the plot in to the publisher and it has to be approved by the editor and by the studio. After that’s done, we start building chapters to accomplish the dramatic goal.

I use 5X7 notecards to build an “arsenal” of words, phrases, descriptions, character names and traits, lines of dialogue, tech stuff, lists of descriptive words for the aliens, the ships, the people, etc., and everything I’ll need so I don’t have to stop in the middle of a scene to look for an adjective or a piece of technology or the name of a weapon. Then I use more notecards to start building the scene, keeping each scene, idea or paragraph on its own card. Then I start shuffling them into order like a deck of cards. I end up with a box full of notecards, separated by little tabs, moving from front to back in the plot. I pull out a set of cards, and write that scene. If I discover that something has to come before something else, I shuffle the bundles. It’s a terrific organization tool and makes me a very fast writer.

Each chapter has its own dramatic goal, inside the umbrella goal of the whole novel. I write the scene or chapter, Greg reads it, tells me everything I did wrong, I rewrite until he likes it, then we move on to the next chapter.

Corporal Hicks – Thanks for the interview. Have you got any last words? Maybe a sneak peak at Cauldron to keep us excited?