Predators has been released in the theatres and released not long after was the game for iPhone. For those of you who own the game, or not, Mr. Weyland was granted an exclusive interview for AvPGalaxy with two of the people who brought you this new game, Carmen Pearson (VP of PR & Communications, Chillingo) and Bogdan Iliesiu, CEO of Angry Mob Games.

AvPGalaxy – Unlike the AVP:R game which was released for the PSP, this game is exclusive to iPhone. What choices were made that decided that ‘Predators’ would be best suited for the iPhone?

Carmen Pearson – The iPhone, iPod touch and iPad are great platforms for games that appeal to both ‘hardcore’ gamers and the casual gamer. The controls are very intuitive on an iPhone so every Predators fan can pick up and enjoy this game with ease. At the same time, we are still able to deliver a great-looking, in-depth game without sacrificing fun. Priced at $2.99 and being a universal binary also appeals to consumers who appreciate that they can play the game on both their iPhone/iPod touch as well as on their iPad.

AvPGalaxy – With the game being for iPhone, what type of problems did you encounter when it came to the control scheme?

Bogdan Iliesiu – We tried to make the controls as easy to pick up as possible, while still allowing the players to perform various combos and killing moves. Initially, there were dual sticks controls, for moving and aiming at the same time. While doing some play-testing with various beta testers, we decided to use a simpler control scheme. So we took advantage of the Predator’s triangulation, auto-lock ability and decided to use that one instead. You move the Predator character with a left stick, and perform various context sensitive attacks with two buttons on the right side. 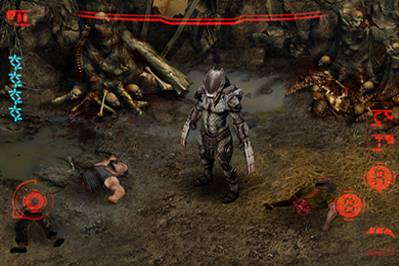 AvPGalaxy – Were many of Chillingo’s employees fans of the Predator (and Alien) films and franchise?

Carmen Pearson – All of our team are fans of the Predator and Alien franchise and were thrilled to secure the license and work with Fox Digital Entertainment  and partner with Angry Mob Games to bring the PREDATORS game to life!

AvPGalaxy – How does this game differ from the other games ‘Chillingo’ published?

Carmen Pearson – We work with indie-developers from all over the world. With each developer comes unique styles of gameplay and each developer has their own taste. For that reason, Chillingo can offer a wide variety of games. We have puzzle games, adventure, shooters and defense games and we’re glad we can always offer a different game for people to enjoy. 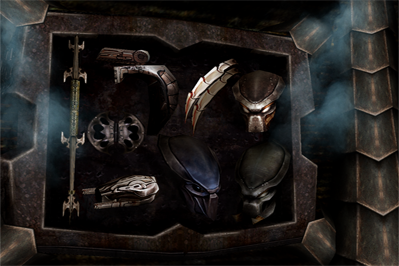 AvPGalaxy – How much development time was given before completion of the final game?

Bogdan Iliesiu – Pre-production on Predators began early 2010. We tried a few gameplay mechanics, to see which would be most fun, while taking advantage of all the great Predator weapons and abilities. We realized really early on that players would like to enjoy lots of action and great killing moves. If we added any exploration or puzzles, it would just ruin the fun, and make the game less intense.

Once we got all this nailed down, and approved, full production started (around mid March). In total it took our team about seven months to complete the full game.

We were able to achieve all this thanks to our very talented team, and also because of our past experience with our previous iPhone title, Guerrilla Bob.

AvPGalaxy – With most of the ‘Predators’ movie, and Predator designs kept secret, how much material was contributed by Fox to help develop the game?

Carmen Pearson – Fox Digital Entertainment has been an integral part in the game development. The game was developed to coincide and support the Predators theatrical film launch. We collaborated closely with Fox to ensure that the game paralleled the film experience.

Bogdan Iliesiu – FOX gave us  access to a library of theatrical content so you’ll see Adrien Brody, Danny Trejo, and plenty of other familiar faces in the game. Working with the Fox Digital Entertainment team and Chillingo was really great, as they were really open to our game design ideas. 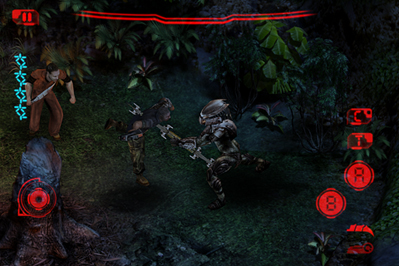 AvPGalaxy – Though this game is not a ‘real time strategy game’ the look and level layout looks similar to another game involving the Predators, called ‘Aliens vs. Predator: Extinction’ (developed by Zono Incorporated) for the Xbox & PS2. Was there some inspiration that came from the AVP: Extinction game, or is this just a coincidence?

Bogdan Iliesiu – I guess that one would really be just a coincidence. The two games do have a similar camera-viewing angle, and they share a main character, but I think there’s where the similarities end. We did get some inspiration from the really great 2010 Alien vs Predator Xbox360/PS3 game.

AvPGalaxy – Were there any influences or inspirations from the other previous Predator movies?

Bogdan Iliesiu – Sure! We carefully watched all 4 previous Predators movies (Predator, Predator 2, AVP & AVP:R). We tried to include any weapons or abilities which would work with our gameplay mechanics. Most of them made it in. Others, such as the medi-kit, were replaced with health auto-regeneration, so we could keep the fast-paced action, without requiring the player to stop and recharge his health. In this game version, the Predator uses the Wrist Blades, the Combi-Stick, Plasma Cannon, Smart Disc, Net Gun, Cloak Generator, Thermal Vision plus some special Predator Masks. We’re working on a new update, where you’ll have an awesome new weapon, with some very satisfying killing moves.

AvPGalaxy – The game has been getting overall good scores and reviews? Do you think there could be a sequel, more Predator (or Alien) games or maybe some other type of similar games in the future?

Bogdan Iliesiu – We’d love to work with Fox Digital Entertainment on a sequel. Many fans requested we invite the Aliens to the party. That would definitely be a killer combination, as the other videogames and movies have proven. We have a lot of great ideas, which could push the game further.

AvPGalaxy – In the future, do you see ‘Chillingo’ one day moving onto larger formats, such as games for PC, PlayStation and XBOX?

AvPGalaxy – Thank you for your time and on behalf of AVP Galaxy. We wish you good luck and congratulations on the continued success of the ‘Predators’ game.