AvPGalaxy – Before your work on Prometheus, what were your thoughts about the Alien universe and Giger’s work?

Carlos Huante – As I said Alien was always, if not my favorite movie, one of the top 5 of all time for me. Sci-fi specific it was probably closer to #1… One of my favorite movies as a child was “It, The Terror From Beyond Space”, which if anyone knows this movie, you’ll understand where Alien came from. So Alien was an easy love for me. Paired with the introduction to Giger’s work made it a landmark, artistically speaking. I’ve said this before but I’ll say it again here: I remember the time before Giger and the time after Giger. That’s how much of an impact Gigers work was to art in general. Everyone who started after Giger has influence from Giger whether they know it or not. It was like the time before Frazetta and after Frazetta. For me, at my age at the time when “Alien” opened, Giger’s work became part of the bag of tools and inspirations that I was collecting for my artistic walk. I mean it gave airbrush manufacturers a massive boost in sales I bet.

AvPGalaxy – Having seen many of your drawings and conceptual designs, there’s a beautiful morbid quality to what you do, and yet, something spiritual, human, riddled with despair….did you ever think to yourself ‘how do I incorporate my aesthetic into a very established Giger world?

Carlos Huante – No. It wasn’t an issue. I mean again one of my early influences was Giger… So it was very easy for me actually. I was loving life working within those constraints. 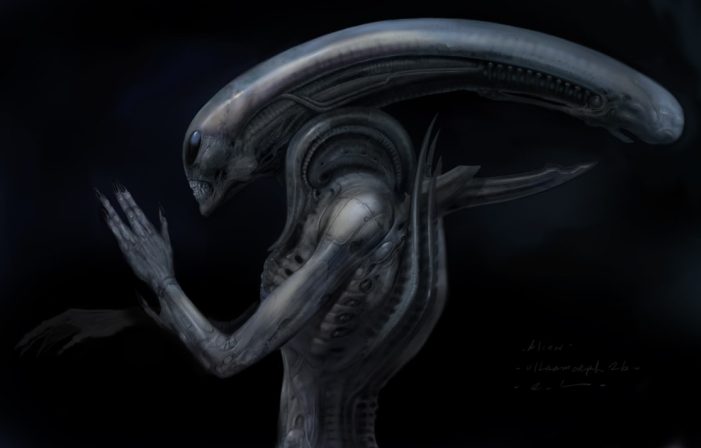 AvPGalaxy – What are you most proud of in regards to your work on Prometheus?

Carlos Huante – At risk of sounding egotistical, I have to say that I honestly liked everything I did for this movie. It was a massive volume of work that I was able to focus on. There were no real ambiguous tangents from an unfocused director. Ridley has ideas and opinions and knows what he wants to do… It was all clear. So from the perspective of an artist looking at that body work I produced. I am very happy.

AvPGalaxy – Any regrets or feelings of ‘I wish I could’ve done something different’?

Carlos Huante – I wish I could have stayed on to supervise the follow-through with the designs. My biggest disappointment is that what I did got modified of course. Any artist would say that. But I really thought they were going to make my Deacon but for some really strange reason they went with the one from the storyboards which was NOT my character and not the design. The board artist illustrated it for the purposes of storytelling for the storyboards but not as the design. I had illustrated a couple of efforts for the open mouth which they showed in the documentary but they were for an even different version that was after the Deacon, when I thought of making the creature even more human. The design of the actual Deacon was abandoned. It was very, very strange to hear the creature group in London talking in the DVD and they’re all looking at the storyboards. I’m shaking my head as I write this.

The genesis of that character came after a conversation I had with Ridley about a design progression of the creatures to the Xenomorph of the first film. I went home and thought about it but kept on with the Gigeresque Ultramorphs. Then as I worked I thought “wouldn’t it be cool if these Aliens who are born of humans and haven’t been mixed genetically with the Engineers yet would look more human and less biomechanical“, of course this was for a different version of the script but that’s where the Deacon (or Bishop, as he was originally named) came from. He later became an Ultramorph and as the script changed slightly after I left the show, it became that thing at the end. Why it was blue? I don’t know… The illustration was blue so as to emphasize it’s whiteness in a dark blue setting and I was following some inspirational paintings that a contemporary Russian painter did of a man’s head that Arthur had sent me from Ridley. The creatures were all supposed to be albino. They were supposed to look simple, beautiful and ghostly like a Beluga whale in dark Arctic water.

AvPGalaxy – Was there ever a time where Ridley liked a design that you weren’t too keen on yourself?

Carlos Huante – Working with Ridley was probably, actually not probably. It was simply the best experience I’ve had working with any director thus far. We agreed on almost everything and it was absolutely cool working with a director that could talk art. That being said, I wasn’t entirely happy with the Engineer design. I thought it was great in theory but I thought it was going to be very difficult in application. And then after the design was settled on, we discussed the fabrication issues I foresaw. I predicted that the Engineers could end up looking fat or thick with bellies if they added too much rubber build up for the suit. Then the costume over all that rubber I thought they’re going to look fat for sure, which they did. So…There’s that.

The Trog… I never really had a chance to go at the Troglodyte properly. I thought it should be an abstract of a man, three shoulder girdles stacked. The facehugger was an abstract of human hands. The Trog, in my mind, should have not been a “creature” which is what it ended up becoming. The first movie was made up of elements that were not easy to categorize. The Aliens weren’t creature-y if you understand what I mean. They were “other”. Giger isn’t a creature designer, he’s an artist. His art was used in the first film as it was. He organized it for the purposes of the film but it was essentially straight out of his paintings. 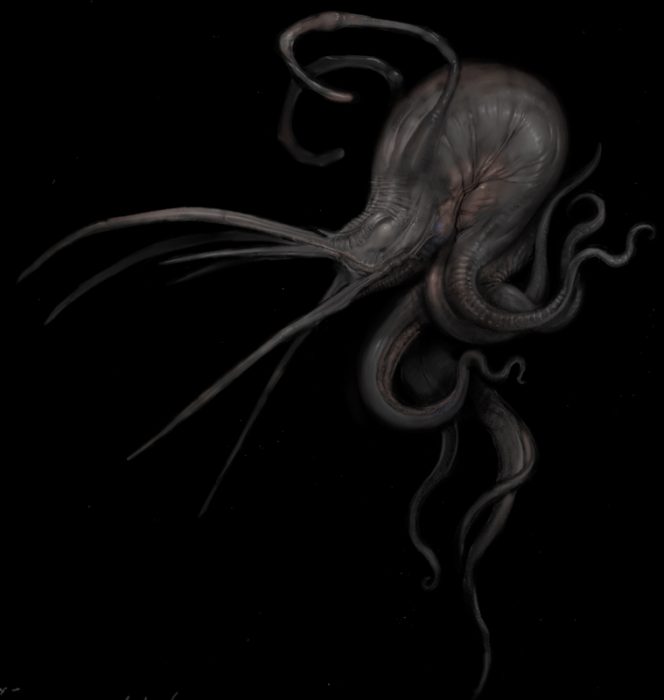 In the end though, you know, it’s Ridley’s movie not mine, I just worked there. His opinion is the one that mattered not mine and so he should have what he wants… I mean it won’t stop me from having strong opinions but they are within the constraints of them being just that, opinions of a raving, raging artist.

AvPGalaxy – Would working on Prometheus 2 interest you if you were asked? What do you think of Prometheus now that everything is said and done?

Carlos Huante – Of course I would be interested. I would say yes in a New York minute. I liked the movie itself and Prometheus has some of the most beautiful shots ever done for a sci-fi movie or any film for that matter. I saw all the outtakes as well and loved the performance of the ape version of Fiflield but the actual creature wasn’t Alien or Prometheus it was an ape… It looked great though, but it wasn’t for this movie. The concept and thread of who the creatures are was all lost unfortunately. The only creature that had a bit of the vibe still left was the worm or hammerhead snake. In the end that sequence is probably the only thing that still held to the original albino concept of the creatures… All that being said I really liked the movie,  and again it was beautiful.

AvPGalaxy – Again, many thanks to Carlos Huante for taking time out of his schedule to answer a few questions and engage the fans.

Images from the Prometheus Blu-Ray release by 20th Century Fox

“The Dogs of Perdition Are At Your Door,” Reviewing Alien: Revival and Alien: Annual #1 – AvP Galaxy Podcast #149
By Hicks (15-Aug-22)
Latest FeaturesInterviews