Admin Note (24/02/07): AvP Dissolution was abandoned in 2004. We emailed Brian Watts a few weeks ago and he told us the website owner and artists lost interest in the project, unfortunately.

A year or so ago, Rival Comics announced they where making an AvP fan comic which was entitled AvP Dissolution. I got the opportunity to interview Brian Watts, the comic writer and series director. Below is that interview. 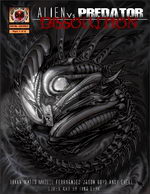 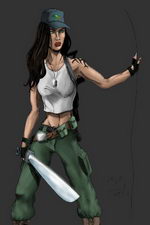 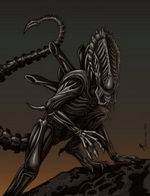 Brian Watts – My name is Brian Watts and I am the writer and director of Dissolution. I was also the one to create it and pitch it to Rival President Steven Severt. As director, it was also my job to find and recruit the artists involved.

Corporal Hicks – How long have you been an AVP fan and under what circumstances?

Brian Watts – I saw the first Alien movie a long time ago…I don’t even remember the year. Since then I’ve seen all of the Quadrilogy repeatedly(I bought them on DVD a few years ago when they first released the set). I don’t even remember when I first saw Predator, but it is probably up there as one of my favorite sci-fi flicks. In the past, I’ve seen a few Aliens Vs. Predator comics and thought that the concept was really cool. I’ve also played through both of the AvP computer games. More recently I’ve been trying hard to acquire AvP comics so that I could see how the universe was handled in the past so that I could better reflect that in Dissolution.

Corporal Hicks – What where the reasons for starting this project?

Brian Watts – Well, I’ve really been looking forward to the new movie coming out, but, like many fans, I was kind of disappointed in the fact that it takes place in the present day rather than in the future like the comics. Now, I recognize that the movie is not supposed to be based on the comics/games(it’s called Alien Vs. Predator rather than Aliens), but it was still a disappointment to me. Don’t get me wrong, I’ll probably see it the day it comes out and I am really looking forward to it, but there’s still a level of disappointment involved. Basically, I started Dissolution in order to mirror the desire of the fans to see some new AvP material that actually takes place in the same time period(generally) as the comics and video games.

Corporal Hicks – How long has it been going?

Brian Watts – I believe that I came up for the idea for Dissolution in December, which means I probably began writing it in early January. Since then, I’ve written the first two parts and have been hard at work on Part III, which will change up the narrative style a bit.

Corporal Hicks – How did the other artists get involved in this comic?

Brian Watts – Well, I scoured Deviant Art looking for artists who had pictures from the Alien or Predator universes. That’s when I stumbled upon a picture that Miguel Fernandez had drawn of a Predator with a cracked helmet. It was, quite simply, one of the best Predator pics that I had ever seen. I emailed Mig, talked about the project with him, and he agreed to sign on as the project’s artist. Andy Exell, one of the two colorists on the project, was found in much the same way as Mig. If I recall correctly, he was fairly new to Deviant Art but showed some great potential, so I asked him to work on Dissolution. As for Jason Boyd, the second colorist, he was interested in working on another Rival production that is on hiatus at the moment until I finish Dissolution. Anyways, I talked to him about my AvP fan comic and he was interested and also agreed to join.

Corporal Hicks – What is the storyline of it?

Brian Watt- Basically, a small cargo ship working for Waylan-Yutani has some technical problems and has to set down on an unknown jungle planet. On the planet, they discover that the surface of the planet is littered with giant temples unlike any the members of the crew have ever seen on earth. Thinking that there may be something on the planet that may be useful to Waylan-Yutani(and help make up for the fact that they are going to be late with their cargo shipment), the captain of the ship, Lillian Bell, leads a small group of her crew members to explore the nearest temple. Inside, they discover an enormous Xenomorph hive and a strange breed of Alien that is unfamiliar to any of them. You’ll have to read the comic to discover the rest.

Corporal Hicks – It seems to be influenced by what we know of the new AVP movie?

Brian Watts – Well, the basic idea of a temple with an Alien hive may seem familiar from the new movie, but the similarities will end there. The jungle planet and the temple will only appear through about half of the mini-series, with the second half moving to another locale to both change the pace and setting.

Corporal Hicks – Will we see some interesting discoveries?

Brian Watts – Of course. Aside from the new breed of Xenomorph, there will be few other things that may come as unexpected as well.

Corporal Hicks – Will you be playing around the Alien and Pred mythos?

Brian Watts – Not really. I don’t want to change too much of the mythologies that fans are familiar with for fear of upsetting them. You can refer to the next question for a more thorough treatment of one of the big issues that has risen as a result of Dissolution.

Corporal Hicks – The Temple Alien seems rather odd, 2 tails, 4 arms and a different head. Is this an early drawing or permanent, because a number of fans are concerned with the alien.

Brian Watts – Well, as most fans know from the movies, once a face-hugger injects its ‘seed’ in an organism, the baby Alien that grows inside begins to morph itself in order to better mirror the genetic structure of the host. This was clearly seen through the contrast of the Xeno in Alien compared to Alien3. In Alien, the Xenomorph walked upright much of the time(same goes for Aliens), but in Alien3, when the host organism was a dog, the Alien was thinner and walked on four legs. It also looked much more like a beast than a biped. And, as can be clearly seen in the AvP world, if a face-hugger hits a Predator, the result is a Predalien, which is a genetic cross of Alien and Predator. Through this common mythology, one could deduce that, depending on the host creature, one Xenomorph could differ tremendously from another. The temple breed Alien(which will probably be redesigned due to fan outcry), is the result of an Alien born from a creature native to the jungle planet.

Corporal Hicks – Which types of Aliens will be in the comic?

Brian Watts – Aside from the temple breed Xenomorph, you will see the Predalien(which we have a few concepts of) as well as the more standard Xeno seen in the first two movies.

Brian Watts – Not so much in Part I, but don’t worry…I’ll make up for it.

Corporal Hicks – How long do you expect the comic to be?

Brian Watts – Part I rings in at 34 pages. Part II will be much shorter, coming to about 15 pages. Expect later parts to be more toward the length of Part I. I plan on having the comic be six parts.

Corporal Hicks – How will the fans be able to order this comic?

Brian Watts – The comic will be released for free on Rival’s site. Just go to the Rival Gallery, click on AvP: Dissolution, and, when it’s released, you will find the actual comic pages there in addition to the conceptual artwork.

Corporal Hicks – Planning on a sequel depending on how well this one does?

Brian Watts – Well, so far fan support has been pretty positive, and I’m going to have the Temple Alien redesigned a bit to satiate the fans. If all goes well, there’s a good chance that a sequel may result.

Corporal Hicks – Will you be doing any other comic on AVP or Alien or Predator?

Brian Watts – Once again, this depends on the success and fan support of Dissolution. I would very much like to continue writing in the AvP universe, though.