The Alien series is one that wears its H.P Lovecraft influence on its sleeves. Alien scribe Dan O’Bannon was a lifelong fan of Lovecraft, having discovered the author at the age of 12 and being scared after spending the night reading The Colour Out of Space.

Never shy about where he Alien drew its influences – O’Bannon would famously say “I didn’t steal Alien from anybody. I stole it from everybody!” Lovecraft was not exempt from that, though O’Bannon considered it as being more in terms of the tone of Alien being Lovecraftian, rather than any particular narrative elements.

Though, O’Bannon would later say in his essay Something Perfectly Disgusting, which can be found on the Alien Quadrilogy boxset, that

“where Lovecraft told of an ancient race of hideous beings menacing the Earth, Alien went to where the Old Ones lived, to their very world of origin. He was right, that was my very thought while writing. That baneful little storm-lashed planetoid halfway across the galaxy was a fragment of the Old Ones’ homeworld, and the Alien a blood relative of the Yog-Sothoth.”

Lovecraft’s work would continue to influence the Alien series in many of the following stories. Mysterious ancient statues, cities and spacecraft would become a staple of the series. However, it was the short comic Elder Gods that would demonstrate the love for Lovecraft in a clear and obvious way.

Written by Nancy A. Collins – who also wrote the Civil War story Predator: Hell Come a Walkin’ – with artwork by Leif Jones and John Stokes, Elder Gods was a short black and white story that was released in June of 1997 as part of the Aliens: Special comic, and told the tale of mysterious disappearance of over 400 colonists on Mira Ceti 4.

Mira Ceti is an actual star, though it is known by a number of names including Omicron Ceti and Mira, located 420 light years from year in the constellation Cetus, named for the sea monster (mostly likely a whale) slayed by Persus and Heracles.

Mira Ceti is a red giant star, located 420 light years from Earth in the constellation Cetus, one half of a binary star system, with possible observations going back as far ancient Babylonian times.

Elder Gods is set in 2099, where the colony on Mira Ceti 4 was the product of an estimated 10 billion credits and over 15 years of toil between the employees of OmniTech and civilian “pioneers.” For the OmniTech employees, it might be a job, for the civilians it’s an opportunity to escape religious or political persecution. Amongst those groups escaping persecution were the Latter-Day Satanists, the Presleyans and the Esoteric Brotherhood of Tulitu.

The Esoteric Brotherhood of Tulitu was a mystic sect that claimed the mid-Twentieth century horror writer Horace Payne Loveless was their prophet, and that his writing was prophetic. The sect’s High Priest, Father Lumley, also had Loveless’ initials tattooed on his forehead.

The Brotherhood considered themselves the “heir to the secrets of They Who Stride Between The Stars,” and their believes revolved around the awakening of “the mightiest of the sleeping Elders, great Tulitu.”

They believed that once the Elder Gods woke from their “eons-long slumber” that there would be “destruction as never before loosed upon the sons of Adam.”  Father Lumley considered the Brotherhood of Esoterics to be powerful, for when Tulitu was “reborn into the mortal world” that the Brotherhood would become “his will made flesh.” 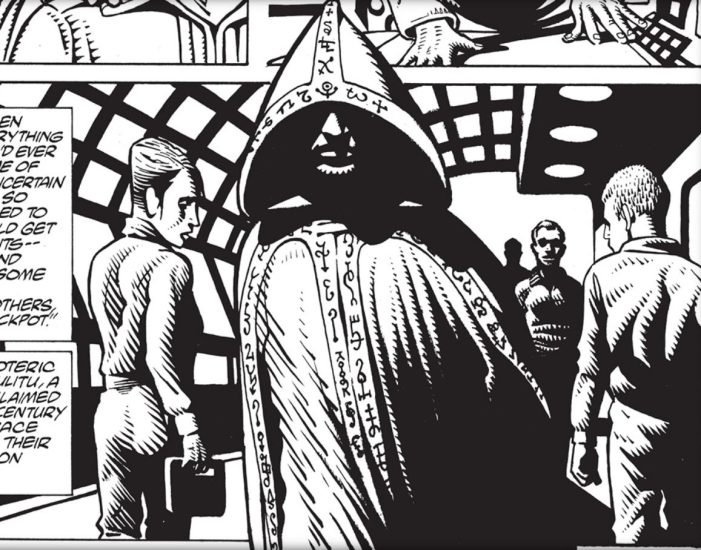 Lumley also believed that the source of their persecution came from others sensing this power. And once the Elder Gods returned “then the unbelievers will pay for their blasphemy – on this world – and beyond.”

The Esoterics were often at odds with the OmniTech management, and following Lumley’s refusal to take on quarry duty, considering it as nothing more than menial labour, the colony Chief Architect threatened to banish the Brotherhood from the colony due to breach of contract, leading the Loveless worshippers to fend for themselves on the arid surface of Mira Ceti 4.

Suffering the indignity, Lumley and his Brotherhood left the colony to begin a ninety day long quarry duty breaking rocks, then processing them in the mineral extractor so anything useful could be shipped back to Earth.

For 23 days the Brotherhood suffered, and Father Lumley stewed over his treatment from the “Omnitech lapdogs” until the Brotherhood found something strange and eldritch: the tip of a metallic statue. Realising the object’s importance, Father Lumley declared the unearthing of the entire thing their priority and began radio silence, refusing all communication with the Omnitech colony.

Eight days later the Esoterics had finished excavating what was discovered to be a statue of an Alien Queen. At its base, a doorway to stairs that led below the surface of Mira Ceti 4. Father Lumley immediately compared the stairs to Lovelace’s “masterwork, ‘The Sign of Tulitu’.” 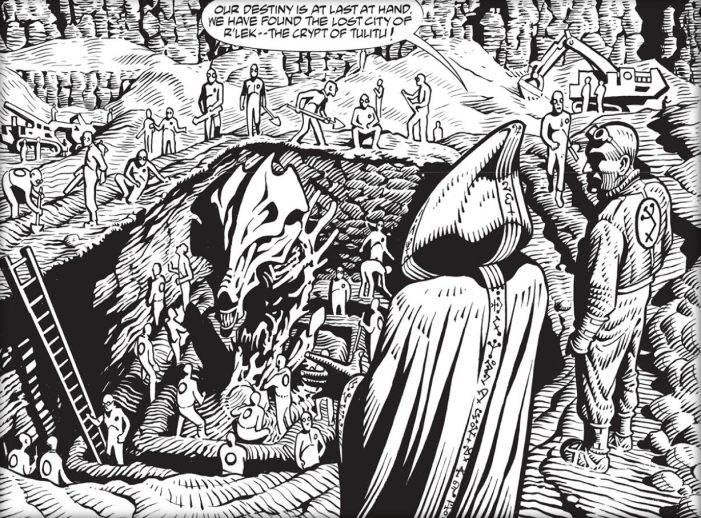 As they descended deeper into the temple – for lack of a better word – Lumley declared the location the “hidden lair of Tulitu.” He would further point out that the lair was as “the prophet described it in ‘The Pinnacle of Insanity’,” and that the Xenomorph XX121 eggs that they found were “the blessed spawn of Tulitu, as foretold in ‘The Abomination from Ipswich’.”

All 52 members of the Esoteric Brotherhood of Tulitu allowed themselves to be infected by the emerging Facehuggers and following their recovery they returned to the Omnitech colony, with more XX121 eggs as their cargo.

Despite being worried at the lack of communication from the Brotherhood, the colony Chief Architect was furious at the Brotherhood’s return 57 days early. Lumley and his followers merely ignored her, carried their cargo back into the colony. It was the last straw for the Chief Architect and she declared that the Esoteric’s would be removed by colony security and banished from the compound the next morning.

While the other colonists spent their night relaxing, the Esoterics hid their Alien cargo in various places throughout the colony, spawning the facehuggers who proceeded to infect 52 further colonists – including the colony Chief Architect.

When the colony security mobilized to remove the 52 members of the Esoteric Brotherhood of Tulitu from the Omnitech colony, they instead found a mass grave. “Tulitu Lives” was written on the room that contained their chestbursted bodies. The last member of the Brotherhood to give birth was Father Lumley himself. 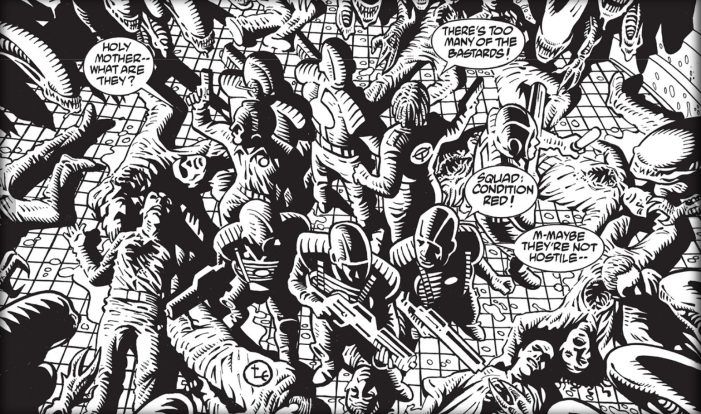 The security forces were quickly overwhelmed by the Aliens. The Chief and her assistant were able to escape, the Chief’s intent being to warn the rest of the colonists. But before they had chance to get far, the Chief birthed her own chestburster while her assistant was driven mad, coming to realise that Lovelace’s fiction wasn’t “just stories after all! There really are monstrous gods that live beyond the stars!”

It would take Omnitech four and a half years for their investigative team to arrive at Mira Ceti 4. All they found was the mutilated remains of the 104 chestbursted colonists – though that number should be higher due to the security forces killed when the Brotherhood’s corpses were discovered. The whereabouts of the other 428 colonists remained a mystery.

In reality, like the manic stricken assistant, they were all abducted by the adult Xenomorph XX121 specimens and taken back to the recently uncovered temple dedicated to the Aliens, the “hidden lair of Tulitu.”

Though Omnitech was never able to solve the mysterious disappearances of the entire colony, many theories did prevail.   One of the less popular was that the Esoteric Brotherhood of Tulitu, who the investigators had noted that the entire group was amongst the corpses discovered, had “succeeded in summoning a demonic entity that killed them and some others, then dragged the rest of the colonists to Hell.”

Though outlandish, that one was a little closer to the truth and it’s entirely possible that Omnitech was aware of far more than they told the public. They were certainly in possession of Father Lumley’s journals that at the very least chattered the discovery of the “hidden lair of Tulitu” where the Alien eggs were discovered.

Following the closing of the investigation, Omnitech continued to develop their colonisation efforts on Mira Ceti 4, stating that they would “not allow the tragedy to dissuade their attempts at making Mira Ceti 4 a viable habitat for human kind.”

Perhaps future colonists would face the same fate as the original pioneers who had been transforming Mira Ceti 4. Perhaps not. But there was now an active hive on the planet, the entrance of which had been excavated and stood as a monument to the matriarch of the Xenomorph XX121 life cycle. 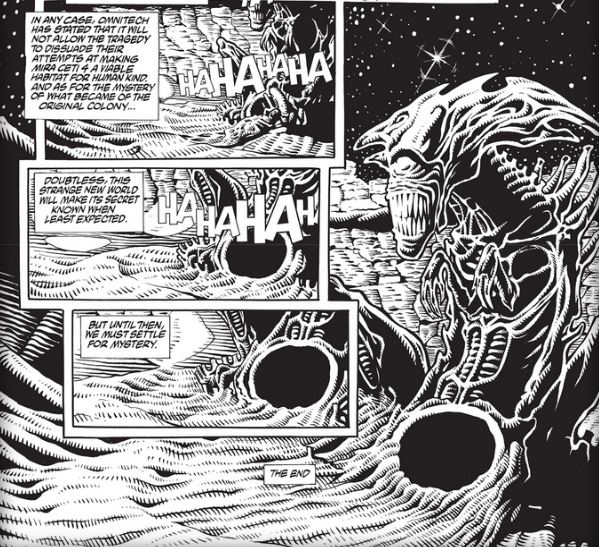 Elder Gods very obviously and deliberately wears its Lovecraft influence on its sleeve more than any other Alien story. Not least of all in title itself with the phrase appearing in The Doom That Came to Sarnath, The Horror In The Museum, Imprisoned With The Pharoahs, and The Call of Cthulhu – that latter being the inspiration for Tulitu, and the story “The Sign of Tulitu”.  Loveless – a take on Lovecraft – also authored ‘The Abomination from Ipswich’ (a parody of “The Dunwich Horror”) and ‘The Pinnacle of Insanity’ (a parody of ‘At The Mountains Of Madness’).

Lovecraft’s Rl’yeh becomes R’lek.  Father Lumley – taken from author Brian Lumley – refers to slumbering elder gods that will be awakened to stride between the stars, which is lifted from The Call of Cthulhu where the great old ones could plunge between worlds through the sky when the stars were right,

Like Lumley, the characters are a role call of Lovecraft’s contemporaries and Cthulhu writers.  Father August is August Derleth, Brother Ramsey is Ramsey Campbell, Brother Aston and Brother Clark are Clark Ashton Smith, Brother Colin is Colin Wilson, and to get even more meta, Brother Blake recalls Robert Blake, a character from The Haunter of the Dark and was itself a play on real life author Robert Bloch.

Elder Gods also follows some other Lovecraftian elements such as how characters are driven to insanity at the realisation of dark cosmic secrets. In Elder God’s this fate is bestowed upon the Chief Architects’ assistant who laughs manically all the way to his death.

Another way in which Elder God’s tributes Lovecraft is how the narrative is told, as in many Lovecraft stories, in the past tense, with the narrator exploring what has happened and trying to make sense of it.

Elder Gods is actually one of my favourite shorts. It might be a little overhanded in its tributes to Lovecraft, maybe bordering a little too closely on parody, but I love the connections regardless. I also love the inclusion of the cult. Unlike the mad scientist routine, I don’t think cults have worn out their welcome when it comes to Alien so I do tend to enjoy the stories involving them.