Corporal Hicks – The violence of the game is something you guys are dead-set on. To the point where you refuse to censor it. Now the game has been banned in Germany and Australia. Do these bannings concern you or Sega in anyway?

Martin Kennedy – I don’t think so. I mean Jason put it out there in a press release about it saying we weren’t going to water the game down. Ultimately he’s dead right. It’s just red-tape standing in the way. There’s no logical reason why Australia couldn’t have an 18 rating. People who want the game will get imported, it’s not going to hurt us. If anything it’s been a bit of decent publicity.

The one thing that the German board hate is the suggestion of torture and that counts as anyone screaming if they’re on fire. Interacting with corpses so everything’s gotta be static. You can’t go into ragdoll, you can’t take their arms off, you can’t headbite them. It’s our decision and Sega said it’s fine. 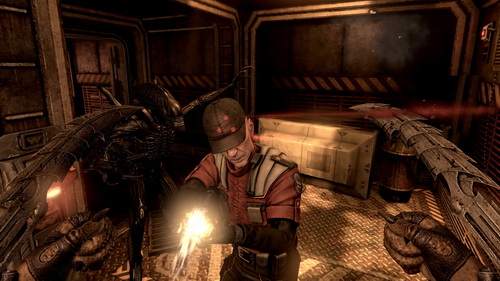 Corporal Hicks – Who wrote the script for the game?

Alex Moore – The script has been a collaboration between many different people. It’s very difficult to just name one person.

Paul Mackman – One of my many roles as a producer was managing the story and the cinematic pieces from a story continuity and narrative point of view. It was really done by external two writers. Gordon Rennie who’s done a lot of work with Rebellion in the past for 2000AD and James Worrall who has worked on a lot of the GTA titles. Two quite talented and qualified writers there.

Tim Jones – As we’ve got through development many of the members of the team, designers in particular, have contributed to the place holder script in many places. The kind of things that need to be said like “What’s happening here?” That kind of stuff.

Paul Mackman – The story originated with the development team and was fleshed out by the writers. As Tim says, the majority of the dialogue in the game is in-mission dialogue and that was written by the designers in the first instance and the writers tend to take that, polish it up, make it more presentable.

Tim Jones – … Make sure it matches the IP [Intellectual Properity] as best it can.

Paul Mackman – That goes off back to us and then off to Sega and Fox and we get their input and tweak it about. Fox have been very involved in the process.

Tim Jones – In the vast majority of cases they’ve been very supportive of what we’ve put forward. And they’ve got a very strong sense that we care about the IP as much as, if not more than they do. They know it’s in safe hands.

Paul Mackman – If you work in this industry it’s almost guaranteed you’re gonna be a fan of these films. We know the licenses off the back of our hands. We’re giving our best to do it justice.

Corporal Hicks – Had you been looking outside the films for inspiration? The Royal Jelly award…that’s something from the comics.

Paul Mackman – We take inspiration from the entire universe really….

Paul Mackman – The comic books, the games, the films. And all the films, not just the classic films. We take what is useful to us, what we think is appropriate and we do our best with it. When you play the campaigns and the multiplayer you’ll see that we have added a little bit here and there to the universe.

Tim Jones – We’ve added some pretty challenging stuff in there that’s going to get the AvPGalaxy forums alight.

Paul Mackman – We expanded the universe for all three species as well as working with Lance Henriksen to tie them all together as he bridges both Aliens and AvP. 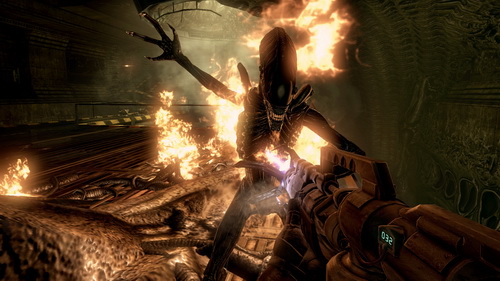 Phil Gresley – It has been quite a challenge. I did an awful lot of work on the single player before I started multiplayer so I had a lot of opportunities to play on different geometry styles and work out what worked well for the mechanics and then take that experience and put it into the multiplayer.

We’ve been very careful with the way the multiplayer levels are built and constructed to give each species are much freedom as we possibly can. And given the rules we have to work from for the mechanics of the background to work well and it’s been a helluva challenge. Although I can understand the rules, trying to get that information out to the rest of the art team and to make sure they follow the rules has been quite a struggle.

At the end we’ve got a selection of very good maps that work and play well. As you run around it’s going to be a very fluid experience. So the hardest part of doing all that was so to keep it as each species can move around the environment in their unique way. Always allowing Predator the space to jump around the environment, giving Aliens the routes so they can move through the shadows and have open areas to jump into the battles and then back out again to a safe area. It took a lot of revision but what we’ve ended up with is something that works really well. I think people are gonna like that.

Martin Kennedy – I went quite a long time without playing the game at all because I’ve spent so long working on it. When I actually got round to playing the multiplayer after a long hiatus I was pleasantly surprised at how balanced everything was. It was a real worry. It worked out really nicely and it’s really good fun to play.

Corporal Hicks – And what about outfits for your avatars on Xbox Live or PS Network? Will we be seeing any cool marine armor or Predator masks?

Tim Jones – We do have some pretty exciting stuff in development which is currently going through the process of submissions and approvals. There’s nothing I can confirm yet but hopefully they’ll be some stuff that people will be excited about it both of those forums.

Corporal Hicks – In chronological order, how would you place the campaigns?

Alex Moore – They interweave. The Alien starts first, the Alien player is partly responsible for everything going to shit – although it could be Weyland’s tinkering that to blame. After that all interweave and it gets a bit muddy.

Corporal Hicks – So no particular order on how you’d recommend people to play through the campaigns?

Alex Moore – Play it how you want to play it. Just have fun with it.

Corporal Hicks – You guys have talked a lot about how you’ve gone back to the originals to be faithful but you haven’t said much about the influence the AvP movies have had on the game. It’s obvious through the story, the look of the Alien vision for the Predator and of course, in your Predalien design. How important would you say the recent movies have been for you?

Alex Moore – The pyramid, definitely that side of it. And Anderson bringing in a lot more of Weyland-Yutani as a corporation having a slightly fanatical obsession with Predators and wanting to find out more about them. We’ve certainly taken that but for the mood, the setting and the feel we really stuck with the first two Aliens and the first Predator movie.

We’re all fans of the franchise, we all lap up pretty much everything that comes at us. But our heart lies with those first movies.

Corporal Hicks – And because I know our members would kill me if I didn’t ask: When will we be seeing a demo?

Alex Moore – There will be a demo…That’s all we can say. [laughs] 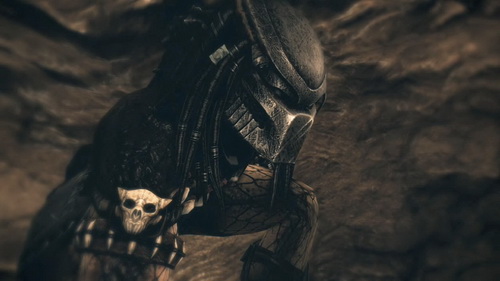 Corporal Hicks – AvP2 has been kept alive all these years by fans creating their own media for the game. There’s no denying it, mods improve a games lifespan. So where do you guys stand on it? It was recently announced you’d be supporting dedicated servers like the fans were shouting for but what about modding? Will we be seeing any fan-made maps?

Alex Moore – It’s one of the things we did look at, it was on the wishlist. We just looked at the cost of it…and the fact that yes, this is a sequel…there’s not one line of code, not one bit of art that is from the original game. This is a new game, from scratch. We just couldn’t justify it at the time, we didn’t have the resources.

Martin Kennedy – It is a shame though, I’m a big fan of community mods. It gives people a chance to tweak things around and modify them as they like.

Alex Moore – I came from the community. I made Quake maps and that’s where I came from. I do know how valuable it is and how much people love it. But unfortunately we weren’t at a position where we could implement it. But never say never…maybe some future project.

Corporal Hicks – And I know this one’ll probably be on a lot of gamers’ minds. Achievements and Trophies. Can you give us any examples of what we can expect in the game?

Alex Moore – If you play through the game on normal you’ll unlock an amount of achievements, the rest are there to find, to play through on the harder difficulty modes. You’ve got various other things to find. The Royal Jelly containers, the audio diaries and the Predator’s got hunters belts as well. We award that that. We’ve got a few that are…[to Phil] Are they tied to multiplayer or tied to Survivor?

Phil Gresley – We’ve got some that are specific to Survivor. Most of the multiplayer ones it is possible to unlock in the single player campaign although it will be significantly easier to get them in multiplayer.

Martin Kennedy – One thing to note though is they’ve all got badass names. I think we managed to get it down so that every single achievement is from one of the films.

Alex Moore – More or less. Fox asked us to distribute quotes from all of the films. I think we probably had most of them from Aliens.