The Predators knew the world as Var, the humans called it Blior. By human standards, it was off the beaten path when it came to colonised space. The fourth of seven planets, Blior was an earth-like planet around which five small moons orbited. It was purchased by Livermore Evanston to establish a game preserve planet where the wealthy could come to experience the adrenaline rush of hunting cloned or transplanted creatures from all over colonized space or human history.

The planet had no major landmasses, but was instead home to 29 smaller continents with comparable sizes to Australia. The planet itself was left largely untouched with only one particular continent, that was self-indulgently named Livermoreland, being actively colonised. That colony city was known as Evanstonville. It was here that Livermore Evanston established his operations cloning various creatures including dinosaurs and Xenomorph XX121.

Despite the natural variety of prey and terrain of Blior, the Predators only visited the world very sporadically. Too much time spent hunting in one place resulted in dull experiences for the Predators. For one clan of Predators, it was time for their occasion hunting trip. However, upon finding that mankind had settled on Blior and knowing the challenge they presented, this particular clan of Predators found excitement at the prospect of more interesting hunts on Blior.

This excitement soon turned to disgust at the discovery of an Alien armed with a weapon which killed the Predator’s clan leader, but was soon destroyed by the overwhelming plasma firepower of the rest of his clan. This Alien was actually one of several cybernetically Augmented Warriors created by Evanston that had escaped from his cloning facility.

As always, we turned to Declan Loftus to visualize the opening scene (with some liberties requested by Hicks)!

A unit of experienced mercenaries and ex-military who had previously fought against Aliens was assembled in an effort to hunt down these escaped specimens, and the infamous Machiko Noguchi would be recruited to lead the unit.

Though none of them would be trusted with the information that these weren’t typical Aliens, Evanston had hoped that once the rogue specimens had been dealt with and his augmented Xenomorphs improved upon, that Machiko would then go on to train these cybernetic Aliens.

And like many of the Alien franchise villains before him, General Thomas Spears in particular, Evanston planned to use the Augmented Warriors as weapons. Though, unlike Spears, rather than using his Aliens to reclaim Earth, Evanston planned to use his Augmented Warriors as tools of conquest as mankind continued to reach out into the depths of space and encountered more creatures like the Predators or the Aliens themselves. Evanston thought it only fitting that he take advantage of one of those species as weaponry in his quest for conquest and glory.

And following the eventual defeat of the Aliens and Predators with his Augmented Warriors, Evanston would turn his attention on humanity itself and use the weaponised Aliens to “remake human civilization according to the ideas [Evanston] knew were correct.”

Though not stated explicitly within the novel, it is heavily suggested that all the Augmented Warriors on Blior were actually clones of one particular adult Xenomorph that Evanston had been able to acquire from the outbreak on Ryushi that devastated Prosperity Wells, Machiko’s former home. This original specimen was kept secured within the cloning facility, contained behind a thick glass wall and sedated by a special gas. 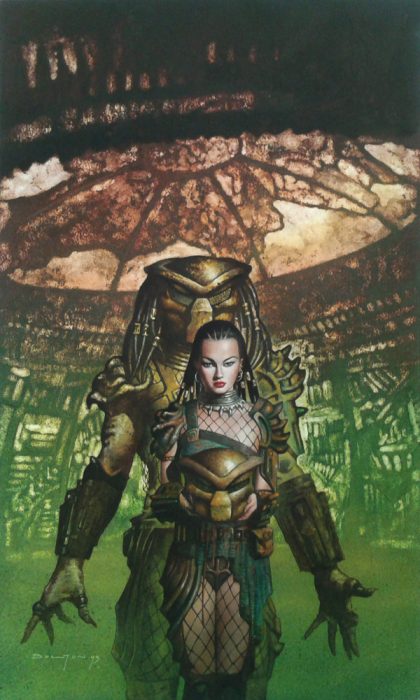 Over a number of years scientists under Evanston’s employment had attempted to genetically engineer or selectively breed other specimens in an effort to increase the Alien’s base intelligence. At this point in the expanded universe the Alien’s intelligence was often compared to that of a dog’s – thanks for that, Steve Perry. In addition to trying to improve cognitive functions, other genetic changes were made with one observed specimen actually having eyes.

It was also reported that the Augmented Warriors had differing physical appearances, with some looking closer to the Queens – or perhaps Praetorians – while others looked more similar to the typical adult Alien, though generally larger in size. It’s unknown if this difference was down to genetic tampering, or if Evanston’s scientists were able to breed juvenile Queens.

Cybernetic modifications such as hyperneural-net transducers and synaptic shunts were also added to improve cognitive abilities. However, the most significant modification seemed to be that Evanston was capable of directly controlling the Augmented Warriors as if they were units in the computer war-games which fueled his desire for conquest and glory that Evanston used to play in school.

Other cybernetic augmentations made to these Aliens included armoured exoskeletons and additional armatures, allowing the Augmented Warriors to carry multiple weapons ranging from knifes and spears to firearms. Other specimens were witnessed with focusing oculars, allowing the Aliens to “see” – presumably in the traditional sense that humans see. This particular augmentation is not explained any further.

Under Control by Marek Okon.

Though the existence of the cyborg Aliens were kept secret from Machiko Noguchi, once she discovered what Evanston was intending she formed an uneasy alliance with the Predators that had come to hunt on Blior.

When Machiko, some of her mercenary unit and her Predator allies attacked the cloning facility, Evanston had only 20 Augmented Warriors at his disposal. He deployed all of them. It was their first actual field test. They moved without the grace or speed of their natural Xenomorph counterparts.

Despite the Aliens’s cybernetic and genetic augmentations, their lack of field experience and their commander’s capabilities were no match for the Predator’s grace and combat skill. The Predator took only two casualties, while 5 of the Augmented Warriors were destroyed.

While Evanston was able to successfully exert direct control over the Augmented Warriors, there hadn’t been much time to properly prepare his control infrastructure and as a result the equipment quickly shorted out and he was no longer able to issue commands to the Augmented Warriors. Instead, independent programs within the warriors caused them to retreat to seek shelter somewhere where they would then shut themselves down and then be able to be retrieved.

Even though he also had a method of directly disabling the cybernetic Aliens, Evanston decided to detonate an explosive within the cloning facility in the hopes of not only containing the augmented Aliens, but also the attacking Predators and their human allies. He was seemingly resigned to starting the project anew after he’d dealt with the situation at hand.

The cybernetic Xenomorphs tore through Evanston’s security forces surrounding the facility, escaping into the surroundings as the cloning facility exploded behind them. The Predators continued their pursuit of the modified Xenomorphs, while Machiko and her human allies pursued Evanston to get him to shut down the Augmented Warriors.

Livermore Evanston would finally be cornered on his private yacht, trying to escape Blior, with his own modified Aliens in pursuit of him. The billionaire planet owner quickly gave Machiko the instructions for how to remotely disable the Augmented Warriors and was then promptly killed by the Predators.

Machiko was then able to initiate the kill-command, causing the remaining Augmented Warriors’ cybernetic components to explode, taking the biological aspects of the Aliens along with them too, ending the threat of the Augmented Warriors on Blior, and bringing David Bischoff’s novel Aliens vs. Predator: Hunter’s Planet to a conclusion.

Though the expanded universe would experiment with entirely synthetic Aliens with Norbet from Aliens: Hive/Harvest, Jeri from Aliens: Stronghold, and the artificial chestbursters created using nanotechnology in Aliens: No Exit, it wouldn’t return to cybernetically augmented Aliens until Rebellion’s first Aliens vs. Predator on the PC in 1999. 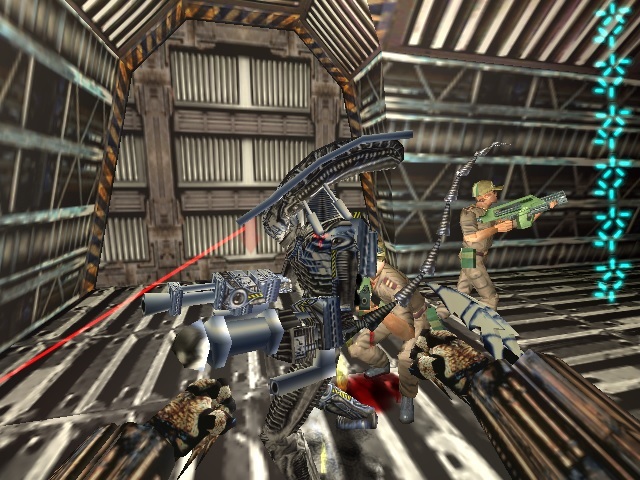 The game’s incarnation of cybernetic Aliens were known as Xenoborgs. There was very little backstory given to them, but they were an experimental security system consisting of three cybernetic Xenomorphs that were first encountered aboard the Odobenus, a spacestation in orbit of LV-426.

The Xenoborgs were much more fearsome and effective than Evanston’s Augmented Warriors. They were less susceptible to damage from small arms fire, and required the heavier firepower of weaponry such as the Colonial Marine’s M83 SADAR or Skeeter Launcher, the Predator’s smartdisk, or precise shooting that could target and hit a small control node on their craniums.

Additional Xenoborgs can also be encountered in Caverns, the Predator campaign’s fifth mission, where they were again used as security system guarding an artificial hive alongside Colonial Marine forces. In the Alien vs. Predator Gold edition, a single Xenoborg can also be found in the Marine’s fourth bonus mission, Gateway, as well as the second Predator bonus mission, Escape. Two are also encountered in the fifth and final bonus Predator mission, Tyrargo. In fact, the entire point of that particular mission seemed to be allow the Xenoborgs to be released so that you could hunt them! 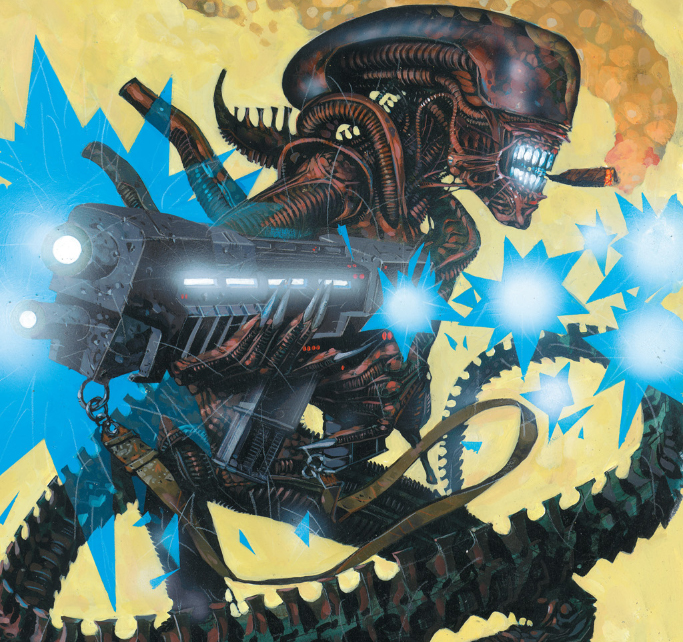 Duncan Fegredo’s rendition of Jeri for the trade paperback cover of Aliens: Stronghold.

Though it wouldn’t actually come to be in the final version, Alien: Echo very nearly saw the birth of a synthetic chestburster. When Alien vs. Predator Galaxy spoke to author Seanan McGuire for the 92nd episode of the AvP Galaxy Podcast, she told us that the very first pitch for the novel had gone a different route with the DNA reflex.

Originally it was [the host] Viola because there’s that whole stress about androids being biomechanical. So in the first pitch we sent in we had the Aliens implant in Viola and then hatched a part android Alien. That got squashed as “yes, they’re biomechanical, but we’re not focusing on that right now. ” So we had to retool with something native to the planet.

The Alien, nicknamed the Xenodroid, would burst from the android Viola, covered in white veins and an appearance that suggested it was made up metal plates.  It was also larger and more intelligent than regular Xenomorphs. The finished novel would instead feature a very different Alien that would still play heavily with the DNA reflex, but be much less artificial in nature. You can find out more about that in our Lion-worm Alien article.

I am admittedly not a huge fan of Aliens vs. Predator: Hunters Planet, the novel that the Augmented Alien Warriors are from. I am, however, a huge fan of the concept of synthetic or cybernetic Aliens. I’m particularly fond of Jeri from Aliens: Stronghold, and I’ve always loved the Xenoborgs. Unfortunately, neither concept has been revisited since the 90s. Personally speaking though, given how much I dislike Hunter’s Planet, I’m  quite happy to not see Evanston’s Augmented Warriors again.