When you think about Predator characters, Light-Stepper is not one you often see get talked about. Despite the fact that next to Ahab, he’s actually the most recurring Predator, Light-Stepper doesn’t see the same attention that the likes of Broken Tusk or Wolf do. And while Light-Stepper’s appearances are in shorter stories, he also has the distinction of being the first Predator we ever saw go up against a PredAlien.

Light-Stepper has appeared in three Alien vs. Predator stories – Blood Time, Duel and War, all written by original AvP scribe Randy Stradley – but only really a main character in one, Duel.

Light-Stepper made his debut in Blood Time, a short story that was first published in the 25th issue of Dark Horse Presents in September of 1994.  It would be collected several times including with Duel and as part of a limited edition digest-sized hard-back that was included with the American Special Edition of Rebellion’s Aliens vs. Predator in 2010 where it was also recoloured by Wez Dzioba.

Blood Time introduced Light-Stepper as a member of Top-Knot’s clan. Top-Knot was Broken Tusk’s subordinate who presumably took over the clan following Broken Tusk’s death. Light-Stepper took part in a blooding ritual along with nine other young Predators including one unblooded known as Two Stripes.

The hunting party had been on the planet two days before eventually discovering any signs of their Xenomorph quarry, an honourable discovery that belonged to Light-Stepper. Having assumed that Top-Knot had lost the Alien’s trail, Two-Stripes took offense to being both wrong about their leader and that Light-Stepper had been the one to discover the first signs of the Alien. Two-Stripes attacked Light-Stepper, but the conflict was promptly ended by Top-Knot.

As the hunt continued Light-Stepper found himself ambushed by an Alien. The Predator’s mask was knocked off and a brutal fight followed. Light-Stepper’s spear was broken by the Xenomorph’s tail, who then pinned the extra-terrestrial hunter to the ground. During the fight, the Alien ripped off Light-Stepper’s lower-right mandible with its inner-jaw and it appeared as if the Predator was about to leave this mortal coil.

Seeing the severely wounded Light-Stepper clinging to life, Two-Stripes – who had been observing the fight – approached to claim Light-Stepper’s kill as his own. Two-Stripes took the Alien’s head and hand, and used them to fake injuries on himself then proceeded to find the clan leader to claim his blooding mark.

Instead, Two-Stripes found the near-mortally wounded Light-Stepper being recovered by Top-Knot and other members of their hunting party. The injured Predator was retrieved and safely placed aboard the party’s ship, while Two-Stripes was abandoned on the planet for his dishonour.

The next time we encountered Light-Stepper was during Aliens vs. Predator: Duel, the two-part comic released between March and April of 1995 that introduced the PredAlien. Duel returned to Ryushi, the planet first visited in the original Aliens vs. Predator series, where a unit of Colonial Marines under the command of Captain Glass respond to a distress call of extra-terrestrial origin.

Aware of the Xenomorphs and their supposed origins on Acheron, the Colonial Marines expected to come face-to-face with a derelict Space Jockey vessel. Instead, they found a damaged Predator craft that appeared to have crashed into the surface of Ryushi. 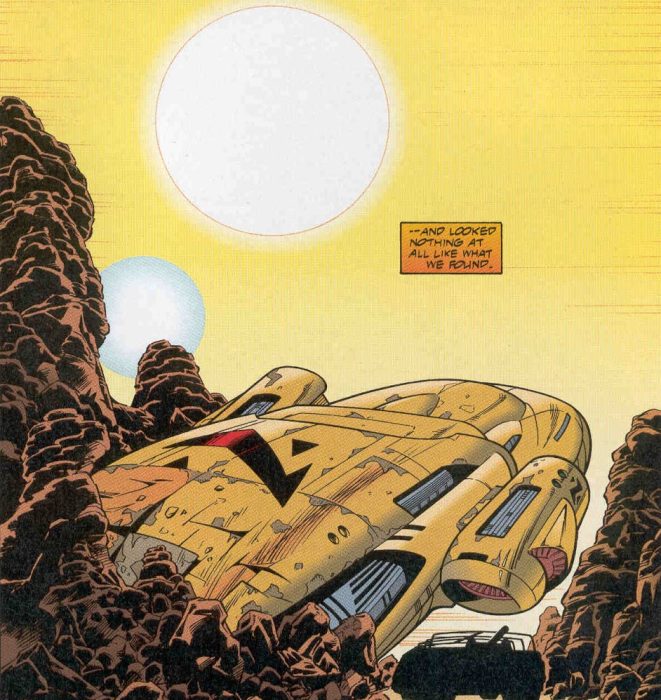 Investigating the downed Predator ship, they found it deserted with one dead Predator, one unconscious Predator, a seemingly dead Alien Queen and a Briar Wolf as its only occupants. The Queen soon proved itself to be alive, killing one of their unit. Fearing there were more Xenomorphs aboard, and still considering the mission a humanitarian one, the Colonial Marines attempted to evacuate the unconscious Predator.

As they rushed back to their nearby ATV, they were ambushed by more Xenomorphs and soon encountered the surviving Predators.

One of five survivors of the crash, Light-Stepper was quick to throw himself into battle with the attacking Xenomorphs. Since we last saw him during Blood Time, Light-Stepper now sported a rag tied around his right wrist. His injury didn’t seem to impact his combat ability, though. Light-Stepper swiftly dispatched the Xenomorphs, seemingly saving the Colonial Marines.

That soon proved to not be the Predator’s priority as he impaled one of their number – Cogeletti – with his spear before being forced to cloak and retreat due to the Colonial Marine’s collective firepower. However, one of Light-Steppers clan mates continued the attack and was killed.

Though not stated explicitly within the story, it’s heavily suggested later in the story the reason that Light-Stepper attacked was to stop the marines from taking the unconscious Predator as he had been facehugged and was carrying a gestating PredAlien – something that the marines would later come to realise.

When he later witnessed the PredAlien in a more mature state, when its Predator influence was more obvious, Captain Glass hypothesized that “maybe that was why the XTs were after us. We allowed this monster to be born. We’d let it out into the world. Maybe it was against their religion.”

The Colonial Marines retreated to Machiko Noguchi’s abandoned homestead – Duel taking place after Machiko had left with Top-Knot – where they radioed for their orbiting ship to retrieve them. It was during this time that the infected Predator gave birth and the remaining Predators attacked.

With rescue in sight and their ship on approach for pick-up, Captain Glass and his surviving Colonial Marines prepared for evac. Their relief was short-lived, however, as Light-Stepper used a gigantic shoulder mounted cannon to destroy the human vessel. Enraged by this, the Colonial Marines pushed the assault and took down another of the Predators, leaving only two Predators alive.

Unknown to the Colonial Marines, as they retreated the newborn PredAlien had hidden away under their ATV and Light-Stepper and his remaining clan mate tracked them to their new refuge in the remains of the devastated Prosperity Wells. Very little was left of the colony following the deliberate crashing of the Lector’s orbital barge.

However, Glass and his marines scavenged enough material to build a defensive wall, with their unit’s flag hung nearby. Using a Motion Tracker and a minefield for defence, the Colonial Marines waited for the Predators. They weren’t, however, expecting an attack from a now mature PredAlien in their midst. 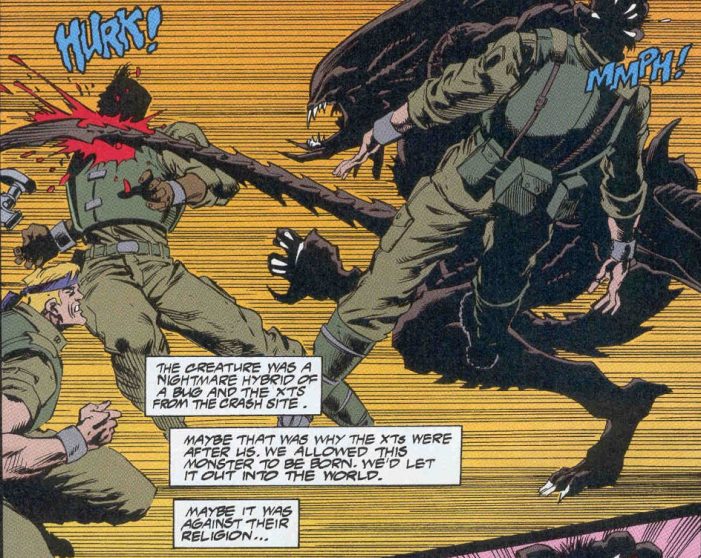 The marines managed to cause the PredAlien to momentarily flee, with Light-Stepper and his clan mate arriving just a moment too late. Announcing their presence with a plasma caster bolt to the chest of one of the marines, Captain Glass detonated the minefield taking out Light-Stepper’s clan mate. Light-Stepper was injured, but still standing, and was now the only remaining Predator on Ryushi.

Removing his helmet – presumably due to damage or to respect his fallen clan mate – we’re also given our first look at Light-Stepper unmasked in Duel, where we see once again his injured mandible, ripped off during his blooding hunt.

Light-Stepper quickly reacquired his quarry, alerted by the Pulse Rifle fire of the remaining Colonial Marine’s attempts to kill the PredAlien. With only his wrist-blades, Light-Stepper jumped into battle with the PredAlien but the hybrid seemed quick to gain the upper-hand.

With only an empty Pulse Rifle, the last remaining Colonial Marine Captain Glass jumped into the fray, hitting the distracted PredAlien across the back of the head with his rifle. This brief distraction allowed Light-Stepper the opportunity to slash the PredAlien’s throat and plunge his blades into the hybrid’s spine, finally killing it. 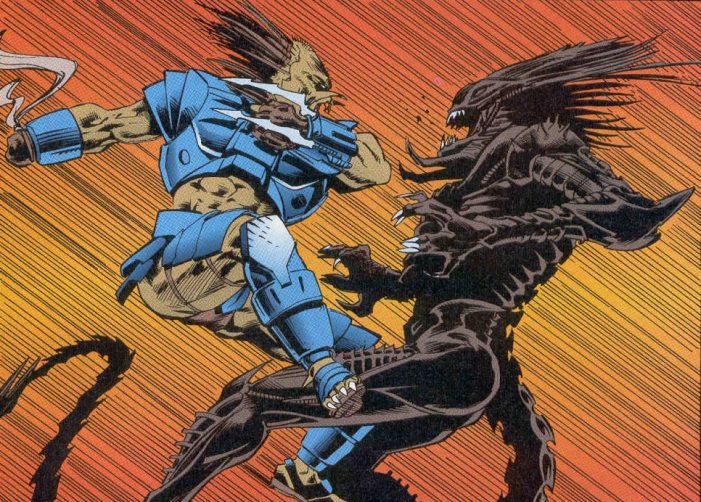 The survivors – one Colonial Marine Captain with no squad to command and one Predator who had lost all his clan mates – collapsed to the floor, the conflict between them forgotten in the victory. Glass would muse that “together we’d taken out an enemy that would have killed us both, and maybe at that moment we came to some kind of understanding.”

Now all the two exhausted warriors could do was wait to see whose people came first – the Colonial Marines or the Predators.

The third and final time that we met Light-Stepper promptly answered that question. Though we don’t know how much time elapsed between the events of Duel and Light-Stepper’s appearance in Aliens vs. Predator War (published between May and August of 1995), it’s very obvious that the Predator’s status had rocketed to great heights.

Set over a year after the events of the first Aliens vs. Predator comic, War sees Top-Knot’s clan reunite for a large scale hunt, one that really exciting the Predators. One of the last stragglers to return is a group led by Light-Stepper, a return that is met with celebration by the others. 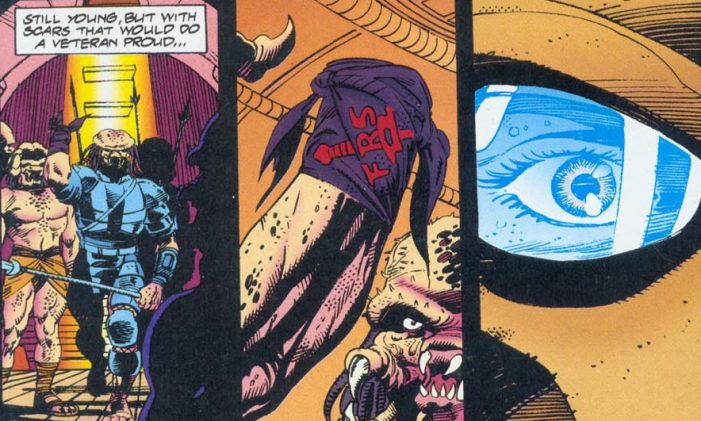 Having not actually met Light-Stepper herself, Machiko Noguchi is unfamiliar with the Predator but due to the excitement expressed at his return, she notes that “whoever their leader is, he must be important, only somebody like Topknot would get this kind of attention.”

Watching Light-Stepper board the mothership, she notes his injuries. It’s at this point that she notices the flag of Glass’ Colonial Marines wrapped around his injured hand, the plain white one the Predator wore in Duel now gone.

Forgetting her own low status within Top-Knot’s clan, Machiko tries to approach Light-Stepper and find out more about the flag. But she is quickly knocked down by the Predator, and she hastily submits to him.

And the last we see of Light-Stepper is a panel of him walking into the depths of the Predator craft. We don’t see him fighting on Bunda, or as part of the skeleton crew left aboard the mothership, so I believe it would be safe to say that given his status, he was leading a hunting party on a different planet.

However, in Stephani Perry’s adaptation of War, it’s suggested that all the assembled Predators were hunting on Bunda, but only Top-Knot would be taking unblooded for their blooding ritual, so Light-Stepper may have been fighting on another area of the planet.

The novelization would go on to further elaborate on Light-Stepper’s high status among the Predators, with Top-Knot describing him as “a Blooded of songs, a yautja who wins many children, has trophies of all and many enemies.”

Given the attention he was receiving, Machiko thought that perhaps Light-Stepper was held in as high regard as Broken Tusk once was. Light-Stepper wasn’t actually named in the novel, with Machiko describing his name in the Predator language as a “phlegmy rattle.” 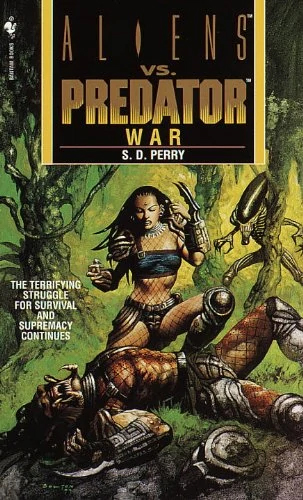 Whereas other Predators are referred to by name – like Shorty and Top-Knot – it’s likely that Light-Stepper wasn’t because likewise the comic didn’t refer to him by name either, and it’s possible that Stephani never read the previous comics that established his character.

And though the novel does describe Light-Stepper being scared, his distinctive lack of a right hand isn’t referenced, with Glass’ Colonial Marine flag simply described as being wrapped around Light-Stepper’s right forearm.

And that is the history of the Predator known as Light-Stepper – the first Predator we ever saw defeat a PredAlien, and one of the few Predator characters with a more significant number of appearances to his credit. Perhaps he’s still out there, ready for another story to revisit his exploits?