When Arnold Schwarzenegger and Dutch returned to the Predator franchise as the first piece of downloadable content for Predator: Hunting Grounds, he returned with a new vitality thanks to OWLF’s success reverse engineering Predator medical technology and a healthy infusion of Predator DNA!

This isn’t the first time that Predator physiology has helped a human cheat death. Hunter Borgia from Predator: Concrete Jungle lived to the age of 100, thanks to Predator blood that he was exposed to upon birth.

Eternal followed the attempts of the reporter Becca McBride as she tried to uncover the truth regarding millionaire and technology mogul Gideon Suhn Lee’s involvement with her cameraman’s death and Lee’s desperate efforts to bait and trap Predators. 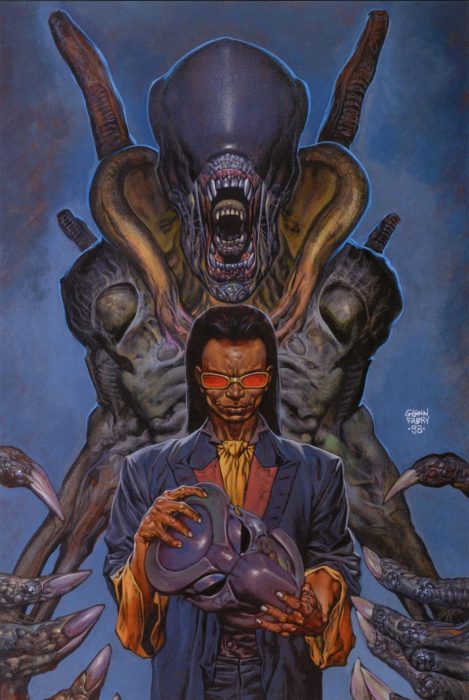 That’s right! Lee was over 700 years old! When we are first introduced to him in the opening pages of Aliens vs. Predator: Eternal, Gideon Lee – known then as Li Yat Sen – was a dying man. A dying snake oil salesman – or more accurately in this case, snake blood salesman.

“A liar, thief, whore and a murderer,” Lee had been taking advantage of mountain villagers by pretending to be a “wandering sage” selling “elixirs and unction’s.” He latest miracle cure, comprised of snake blood, ginseng and urine, resulted in a toxic brew that was responsible for the death of seventeen villagers.

The surviving villagers “smashed his chest like porcelain, drove him out to a slow death, breathing his own blood as night and cold closed in.” And as Lee retreated into the mountainside, praying to Gods he didn’t believe in for deliverance, a flaming Predator spacecraft broke the sky above and “destiny arrived on burning wings.”

Ever an opportunist, it was within this flaming Predator craft that Lee discovered salvation. Inspired by the tale of Subotai, a noble samurai who bested a Predator and then ate the heart of his enemy and lived until he was over 200 years old as a result, Lee found immortality – as long as he had Predator genetic material on hand. Though it wouldn’t be established until Predator: Xenogenesis was published the next year, a human life could be extended by over 200 years for each Predator heart that was consumed.

Lee also found advanced technology that would take him hundreds of years to decipher and provide him a vast fortune as he did, developing technologies such as disposable computers with the width of a sheet of a paper that could be crumpled up and thrown away. 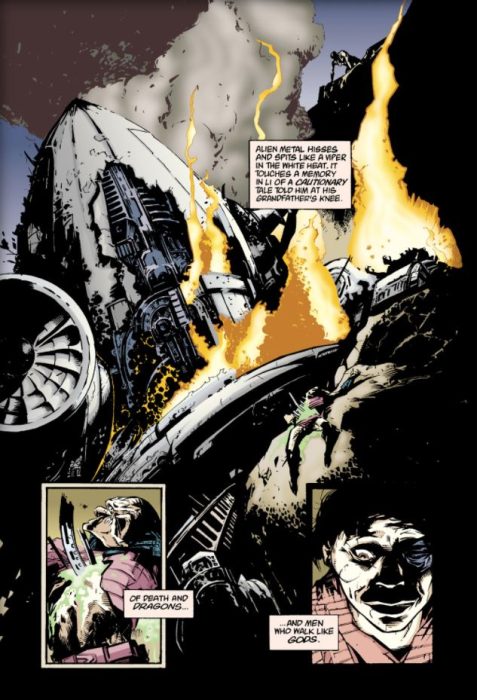 In the early 21st century Lee’s attempts to bait new Predators to Earth to prolong his life further continued to fail. Fearing his physical immortality was at an end, Lee set his sights upon Rebecca McBride as a potential author for his biography, seeking to find immortality with the written word.

But first he had to test Becca’s determination. How would he do this? By orchestrating the death of her cameraman in her pursuit of a story, destroying her career and reputation in the aftermath. Lee would leave her a trail of clues for her to follow in her attempts to discover the truth and pose as an informant known as Lazarus, all for the purposes of seeing if Becca would be able to connect Lee to the death. And she did.

Despite Becca’s involvement being a result of Lee believing his death was imminent due to a lack of nearby Predators and his degenerating body, by the time the two actually met in person, Lee had succeeded in luring the Predators to Earth. Though succeeding may actually be being too generous. The arrival of the Predators was actually accidental.

Although he had lived for over 700 years, and amassed a fortune from technology derived from the crashed Predator ship, Lee had barely scratched the surface of what the wreck had to offer. It was during this period of Predator scarcity that Lee’s scientists were finally able to open the ship’s cargo pod.

What they found were Xenomorph XX121 eggs. Lee barely had time to consider that these eggs might contain the young of the Predator before his scientists were impregnated, the hatching of the eggs actually causing the Predator security systems to activate and signal a nearby Predator vessel. 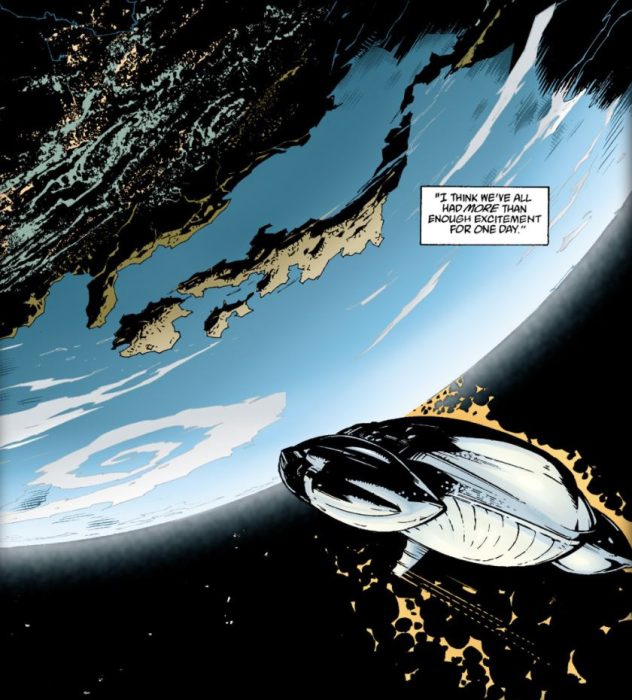 As his infected scientists gave birth, Lee quickly surmised that the newly born extra-terrestrial creatures shared no similarities to the Predators he so craved, but were instead their quarry. It was during the birth of the XX121 specimens that the investigating Predators appeared and attacked. In the chaos of the fighting, the young chestbursters were able to escape into the Tokyo sewers where they quickly grew and established a hive, abducting unaware citizens.

As the Predators tried to hunt the Aliens, Gideon Lee hunted the Predators. One of Lee’s successes with reverse-engineering the Predator technology came in the form of advanced infantry equipment. Lee had a private security force armed with their own cloaking devices, plasma weaponry and spearguns all developed from Predator technology. Lee tasked this unit’s leader, Major Cabot, with securing him Predator corpses.

Fortune would be on Lee’s side – for a time at least. An unsuccessful attempt by the Predators to enter the Alien hive would result in a retreating Predator’s death as it emerged from the sewer into the path of a truck. Lee’s assault team was able to secure the corpse, providing the dying Lee with the genetic material to recover. Though not stated within the comic, Alien vs. Predator Galaxy spoke to writer Ian Edginton, who explained that Lee was no longer simply eating Predator hearts and that as “science progressed, he [Lee] refined the process to something less ghoulish.”

Even though his death was no longer imminent, Lee still wanted McBride to write his biography, to record who Lee had been and what he had become. And while his body was no longer failing, Lee wanted to ensure he could secure more Predator corpses. His plan – to capture one of the escaped Aliens and use it was bait to lure the Predators to him.

Lee, McBride, Major Cabot and his assault force headed into the Toyko subway to spring their trap. Instead, they walked right into a Predator trap intended for the Aliens – a human host ready for impregnation. Though the humans were not their intended targets, the Predators attacked the humans armed with equipment derived from their own technology.

Lee would find himself face-to-face with a Predator. Aware of the Predator’s “primitive code of honor” Lee disarmed himself, appearing to challenge the Predator to combat “the old way.” Understanding the challenge, the Predator likewise disarmed and moved in for close combat. “Not an honourable man” himself, Lee would activate a Plasma Caster concealed in his armour to kill the Predator.

Lee’s fortune and 700 years of existence would end shortly after this apparent victory. As his moved in to claim his “spoils”, the last remaining Predator would take Lee by surprise, ripping his technologically augmented heart from his body and killing him. 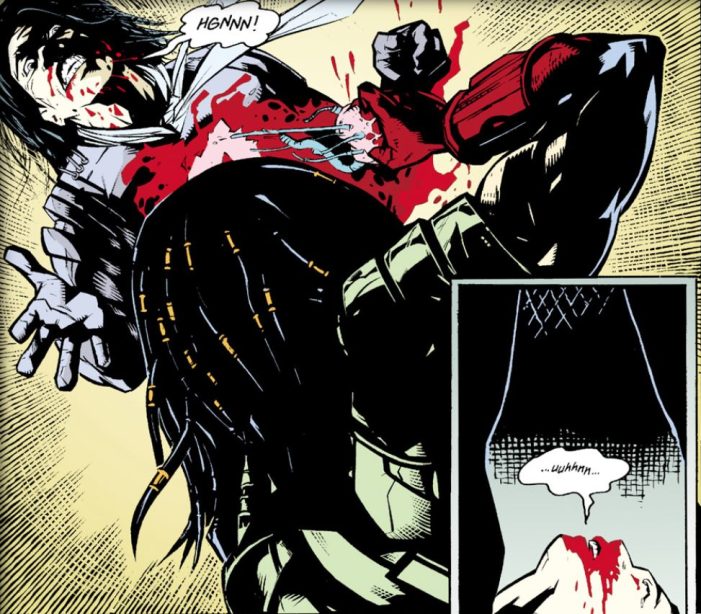 Lee, a man obsessed with his continued existence and legacy, would be dealt one final cruel blow by fate. The flesh of his skull, taken as a trophy by the surviving Predator, would quickly disintegrate and the Predator would crush the skull in its hands, the very physical evidence of Lee’s existence left to fall to the floor like sand from a broken hourglass.

Following Lee’s death the Japanese government would seize all of his private and corporate assets, denying any existence of Lee’s vast collection of Predator equipment or the crashed vessel contained within Lee’s corporate headquarters in the middle of Toyko.

Though he would not find the immortality – either figuratively and literally – that he sought, Gideon Suhn Lee would find a legacy thanks to the posthumous payment that Becca McBride received when Lee asked her to write his biography. She returned to London a millionaire. She gave half to the family of Earl, the cameraman that Lee had murdered.

Becca would use the other half a million in an attempt to investigate the Predators, hiring techno-pagan’s – a collection of “rich-kid chums” who were “into veganism, smart drugs, raving and best of all, total data access. They hack corporate and governmental dirty laundry and hang it out on the Net for all the world to see” – to hunt down the truth of the Predators. To find out who they are, where they come from and what they really wanted on Earth.

While Lee would never get his ever-lasting existence, Edginton would return to the concept in 1999 when he wrote Predator: Xenogenesis, where he retconned Subotai – the ancient samurai who inspired Lee’s immortality – back to life. Rather than the focus being around actually obtaining life, the character’s plot would instead revolve around Subotai’s thousand years long conflict with a specific Predator and using himself and his status as bait.

Though not to do with gaining immortality, the consuming of Predators has also been featured in some other stories. The one-shot comic Predator: Strange Roux is the more notable and accessible one, in which a Louisiana man traps and kills a Predator in quick-sand and makes a pot of Gumbo from its remains. Predator body parts are also consumed in Robert Rodriguez’s insane original draft of Predators written in 1996, where one of the characters who is obsessed with eating, barbeques the remains of a Predator he kills. Though those are all stories for another time.