First introduced in 1997 with the release of Aliens: Purge, a one-shot comic written by Ian Edginton, Eloise was an Alien/Synthetic hybrid lifeform created at the Adullam research facility, an outpost that as of the start of the comic was owned by the Adelaide and Bombay Holdings Alliance. This was information that was delivered to its researchers by Colonel Armand Gautier, a representative from their new owners.

Doctor Fred Lichtner operated the Adullam facility, conducting research into how dry leprosy was able to stunt the development of the chestburster stage of the Alien’s life cycle. However, Lichtner had secretly been redirecting funding from the leprosy research into utilizing the Aliens for production of synthetic life forms.

Eloise was not constructed like a typical synthetic. She was grown using the DNA of an Alien Queen. Lichtner was able to “reprogram” the DNA to facilitate her growth. This would allow synthetics to be grown at a fraction of the current costs to manufacture them. He explained the process as…

Lichtner had several unsuccessful and distinctively Alien-like failures on display in his research facility. As far as we are aware, Eloise was the only fully functional Alien/Synthetic hybrid that the doctor was able to develop, describing her as “an unexpected product of an early attempt.”

Eloise was faster and stronger than your average human being. She was also developing her own emotional responses. Due to being a research prototype, Lichtner didn’t program Eloise with any behavioural conditioning other than a basic moral code. This meant she was unaffected when Colonel Gautier’s tried to give her orders and was able to operate of her own free will.

She had also become a maternal figure to the lepers that lived in Adullam facility, something that Doctor Lichtner attributed to Eloise’s Alien Queen heritage.

Like Ripley 8, another being who shared Alien DNA, Eloise seemed to be connected to the Alien’s hive mind. She was able to feel the death of the Aliens and the infected lepers – who also shared a connection to the hive mind due to the stunted chestburster within them – when Colonel Gautier ordered the deaths of all the scientists, leper and Aliens.

Following a later encounter with Eloise by Captain Lotus Hernandez, the Captain also noted that Eloise shared a connection with the Aliens and the infected lepers. During Hernandez’s debrief, she described Eloise’s control over the Aliens as instinctual. 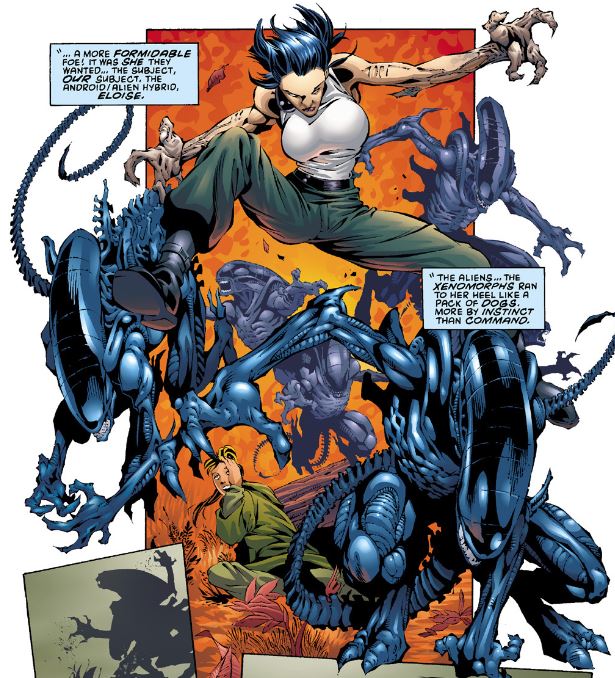 Though that may just be suppositional. Eloise’s full connection to the Aliens is not understood.

While at the Adullam facility, the agony of all the death around her became too much and the pain triggered the growth of claw like hands and Eloise killed her guard. She was able to kill Gautier’s men who were slaughtering the infected Lepers.

Rallying the lepers around, Eloise was able to use her connection to the hive mind to also exhibit some control over the adult Aliens and she confronted and subdued the Colonel. Aware of the inevitable follow-up team from the Alliance, Eloise commandeered Gautier’s ship and took the surviving lepers and Aliens with her into deep space.

Eloise would appear for her second and final time in Aliens. Vs Predator: Pursuit. Released as a story in Aliens vs. Predator: Annual #1 in 1999, 2 years after Purge came out, AvP: Pursuit was once again written by Ian Edington.

As Eloise predicted, the Adelaide and Bombay Holdings Alliance sent several pursuit teams to track and detain Eloise and her brood of infected lepers and Aliens. She was able to keep ahead of them for some time until one particular team led by Captain Lotus Hernandez was able to catch up with Eloise on LK176.

Described by Hernandez as a “grade nine colony world,” LK176 was a dense tropical world that Hernandez considered “perfect for guerrilla warfare.” However, instead of meeting Eloise and her Aliens, Hernandez’s team came across a trap sent for the Alien/synthetic hybrid by the Predators. 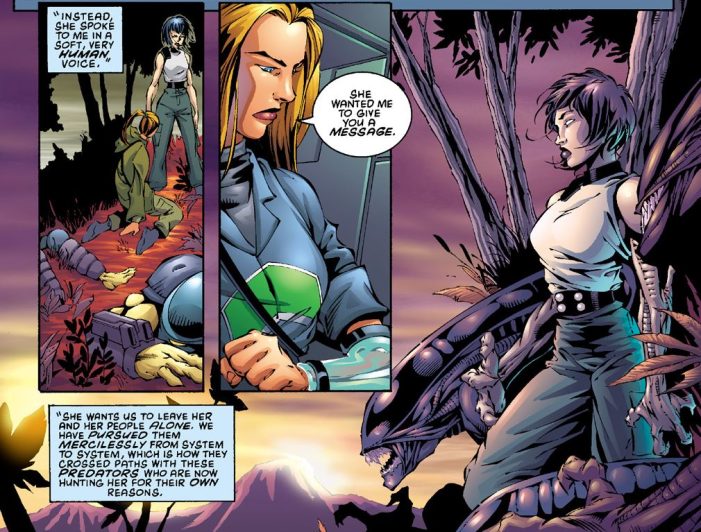 Drawn to Eloise’s existence by the Alliance’s relentless pursuit, the Predators had kidnapped several of Eloise’s leper followers. The Predators crushed the leper’s larynx’s and strung them up as bait for Eloise.

Instead Hernandez and her team triggered the trap and were attacked by the Predators. As her people were being slaughtered, Eloise and her Aliens attacked the hunters, forcing the Predators into a retreat.

Hernandez attempted to ambush Eloise but was instead subdued and ordered to give a message to her Alliance superiors.

“She wants us to leave her and her people alone. We have pursued them mercilessly from system to system, which is how they crossed paths with these Predators who are now hunting her for their own reasons.

She is sick of running. She warns that if another unit is sent after her, she’ll consider it an act of war, a war we’ll never win.”

In Aliens: Purge Eloise had the physical appear of an average human, though the lepers considered her “a ting o’beauty t’behold.” Aside from her genetic makeup, her only distinctive trait was her black eyes. That is until towards the end of Pursuit when Eloise’s skin on her hands began to split, revealing claws beneath.

Colonel Gautier himself had a deep appreciate of Eloise, considering her an entirely new type of lifeform – not quite a synthetic and not quite an Alien. 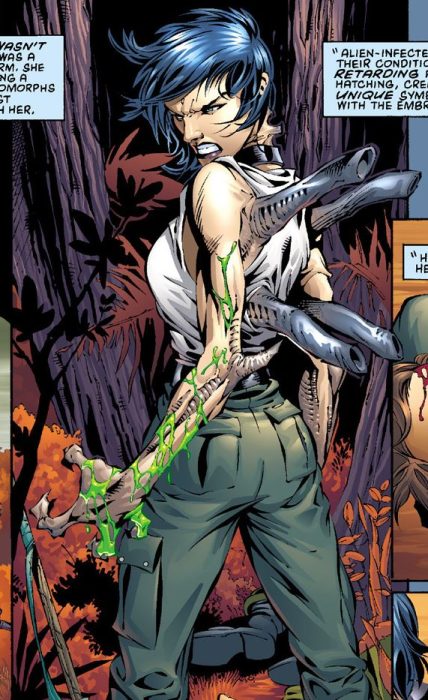 By the time Lotus Hernandez encountered Eloise and her brood in AvP: Pursuit, Eloise had developed some very distinctive physical Alien traits such as the back tubes/smoke stacks and the biomechanical detailing on her arms. Her hands themselves had also gotten significantly larger and clawed, resembling the Alien’s hands.

Following the encounter on LK176 in Aliens vs. Predator: Pursuit, Eloise was never heard from again.