Alien: Isolation‘s reveal in early January pricked a lot of ears and crossed a lot of fingers. To create a game that uses Ridley Scott’s masterpiece as its central font of inspiration, featuring a story parked in the grey zone between Alien and Aliens, and a focus on lo-fi aesthetics and survival horror gameplay over hi-octane gunplay, it all seems like a free shot at an empty net – but then again so did Colonial Marines. With fans understandingly cautious, developer Creative Assembly have been keen to show off their game and, more importantly, actually let people play and experience it first hand.

The reactions from industry journalists (and AvPGalaxy’s own Corporal Hicks and Dachande) have been universally in favour of Creative Assembly’s work so far, but many fans still remain reserved and, after the humiliation of Colonial Marines, perhaps rightfully so. The devs behind Alien Isolation certainly seem to acknowledge and understand this difficulty, and are certainly rising to the challenge of satisfying a beleaguered and suspicious fanbase.

On February 12 at the Ray Dolby Theatre in Soho, London, Alien: Isolation‘s design lead Clive Lindop, lead UI artist Jon McKellan, and lead game designer Gary Napper stood up before an assembly of forty to fifty fans to give them a behind the scenes look at their game. I travelled nearly five hundred miles from my home in Scotland to London on an overnight bus to attend. The presentation itself was mostly a reiteration of everything they said at the time of the game’s reveal. It wasn’t particularly revealing in terms of showing us anything new, but it did delineate further the game’s design ethos and the intentions of the developers.

Central to this is Alien’s ‘used universe’ aesthetic. Creative Assembly studied the film’s production details (loaned to them by Twentieth Century Fox in a three terabyte package) meticulously. They looked at blueprints and continuity photographs and reams of concept art. Then they duplicated the style of the film’s artists in order to create environments that looked as though they belonged within (and subsequently leapt from) Alien itself. They did likewise with the score, re-recording and supplementing it in the process. Now, borrowing the film’s visuals and audio is double-edged.

The game can mimic Scott’s film down to the nuts and bolts holding the spaceships and stations together, but can it surprise players who know Jerry Goldsmith’s every cue? Can it frighten fans with a creature that they frequently visit in their fan-art and fiction, never mind their nightmares? To their credit Creative Assembly are well aware of the benefits and limitations that mimicking Alien can bring, and they made a point to stress that they don’t want players interpreting the musical cues to divine when the Alien will attack, and they hope to create situations where the last thing the player wishes to do is stand up and scrutinise the Alien’s design (but if you can, please do. It’s almost meticulous and very encouraging to behold).

Regarding the titular monster, the team wanted to bring Giger’s Alien back into the mix, at least in terms of its biomechanical design and single-mindedness. Giger’s Alien, they pointed out, was the most honest character in the film. Where the Nostromo’s crew members bickered and struggled and jockeyed amongst themselves, the Alien’s goal was never in doubt. Every encounter with it resulted in death. Creative Assembly want to bring that purity of purpose back to a series which has lately treated its namesake as a crawling bullet-sponge.

The real interesting part was seeing and hearing the game over a top-of-the-line sound system (Dolby Atmos, if I recall). Amanda Ripley’s ragged breath enveloped the room. The station’s klaxons and various other alarms overwhelmed. The Alien’s footsteps boomed. The gameplay footage consisted of Ripley Jnr babystepping through the corridors and labs aboard Sevastopol. Now and then she would inspect a fuzzy-screened motion tracker (design-wise it’s somewhere between Ash’s jerrybuilt contraption and the Colonial Marines’ militaristic hardware). The HUD is unobtrusive, the health bar is small and consigned to the lowest left corner of the screen. 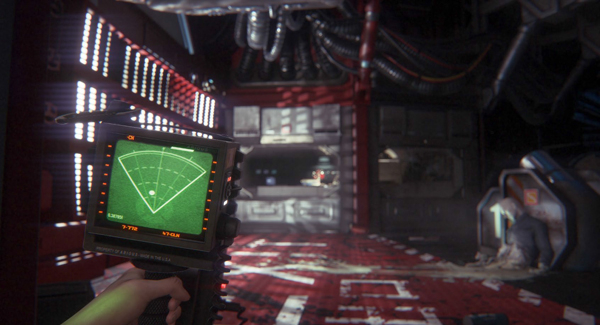 The motion tracker, when raised, dominates the screen. The environment blurs when you inspect the device, limiting your field of vision. This way, using the motion tracker will have tactical elements and risks that don’t exist when a HUD is pasted to your screen. Registering the exact location or pathway of a blip on the tracker turns out to be a matter of interpretation – the tracker isn’t entirely helpful, but it’s probably one of the best tools you’ve got. Creative Assembly again stressed that the tracker’s usefulness (or lack thereof) has an analog in Alien, namely the scene where Dallas is in the vents. That feeling of being backed into an insurmountable situation is what Creative Assembly are hoping to replicate in your various encounters with the Alien. When the creature does appear Ripley suddenly shrivels behind cover. You can only glimpse the Alien as it feels you out (in addition to giving the Alien visual and auditory senses, Creative Assembly imbued it with a sixth sense that seems to narrow down your location, at least when in proximity to the creature).

Getting discovered is always fatal. The Alien lets out a frightening roar (an original sound which I approve of) and its footfalls turn into a rapid drumming. It’s amazing to see how disorientating the gameplay suddenly becomes in these moments – the camera jerks back and forth as Ripley runs, her panicked breaths become sharper and sharper and the killing blow is instant and decisive. We were treated to a few impalings, with the Alien’s tail bursting through Ripley’s guts. Another kill saw the Alien snake around Ripley’s body and leer in her dying vision. The response to the footage was a series of smiles and approving nods in the audience and a few screams from my fiance, who I had brought along.