Bringing up the end of the studio tour was none other than the Big Chap himself. This part of the tour focused more on the Alien behaviour and movement with Clive Lindop (lead programmer) and Garry Napper (lead game designer) talking us through it.

Dachande and I were treated to a simplified explanation of the Alien’s behavioural pattern based on its perception of its environment. The flowcharts that they showed us also revealed that the Alien seems to appear in both scripted manners (like the demo we played) and to spawn elsewhere in the map and hunt Amanda down. 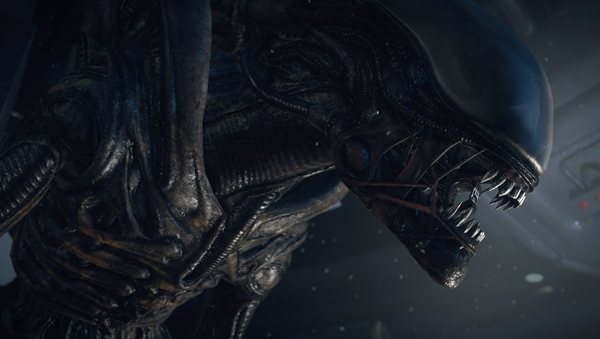 We were also shown the level of detail that has gone into the animation and the fluidity that model is capable of with the animation. During this demonstration we also discussed the changes to the Alien’s legs – this was primarily to reduce the feeling of “man-in-a-suit” and with some of the animations I was being shown and the speed in which they were taking the Alien to, I can completely understand.

The animation of the turns and movement changes the Alien was doing at such great speeds looked fantastic with the digigrade legs. All of the animations looked completely fluid and worked so well.

Something I would like to mention is how the pose in which the Alien moves. With Aliens: Colonial Marines we’ve been subjected to the Aliens approaching you from below your eye level, come at you like dogs. To see the way Creative Assembly was having this hulk steamroll towards you, towering above and moving so fast was just imposing.

My experience with the game so far was really positive. I had not expected it to have quite the physical effect it had on me and I honestly don’t know if I’ve got sufficient manhood to be able to sit through an entire game that terrifies me as much as my time with the demo did.

I look forward to seeing how Creative Assembly progresses with the game but I sincerely hope that they continue the way they’re going. I think after recent years that this is the game that the Alien fanbase deserves.

I’d like to take the opportunity to thank Creative Assembly for inviting us to get a chance to play the game and to speak to the developers. Be sure to check out our interview with Al Hope and Jon McKellen. Also have a listen to Dachande and I’s podcast recalling the visit.

Continue here to find our interview with Creative Assembly about Alien: Isolation.