The sounds played a huge part on the immersion and tension building. There’s something to be said for hearing the Alien when you can’t see it or daren’t look for it. During the tour we were shown the sounds department and spoke to Al Hope (Creative Lead) and Mark Angus (Lead Audio Designer) who showed us various sound elements they were employing in the game.

In particular, I was very fond of the dynamic sound design. With the Alien being an entity unto its own, it would not be possible for the audio engineers to design a score for the game when the Alien wasn’t guaranteed to behave in any particular manner. 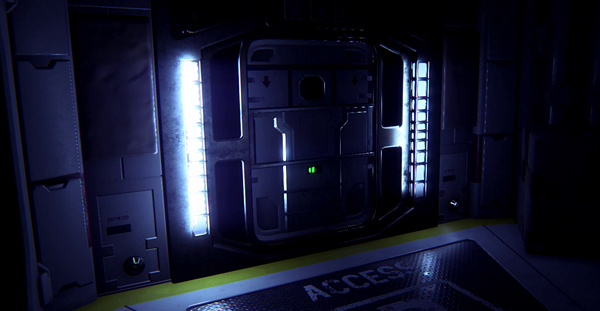 To compensate for this Creative Assembly has made the sound react to various trigger elements which includes the players distance from the Alien, the Alien’s environmental awareness and behaviour. For example, the closer the Alien gets to the player, the louder one specific track gets, taking dominance over the ambient background track.

Another element I liked was that the sound was also designed to mirror player focus. When the Alien is close to the player and the player is focusing on nothing other than avoiding the monster, all other sounds become mute and you’re hearing only the Alien, your breathing and the dominant musical track at the time.

Creative Assembly was given access to much of the original sounds from Alien, straight from the 20th Century Fox vault. Al Hope treated us to a recent delivery from Fox and Dachande and I listened to sound engineers from over 30 years ago working on the various musical effects employed in the title credits and from the surface of LV-426.

In the tracks that Al and Mark played for us, it was easy to see where Creative Assembly was making use of the original sounds but blending their own original elements into it. It all worked to very good effect and it made such a fresh changing hearing that suspenseful music over the beating drums of the action games of recent.

Something I didn’t get chance to ask was for the inclusion of that strange and haunting scream/static sound that plays during Alien when Dallas is finally cornered. I hope Creative Assembly read this and consider including that sound when the Alien catches you in the game. 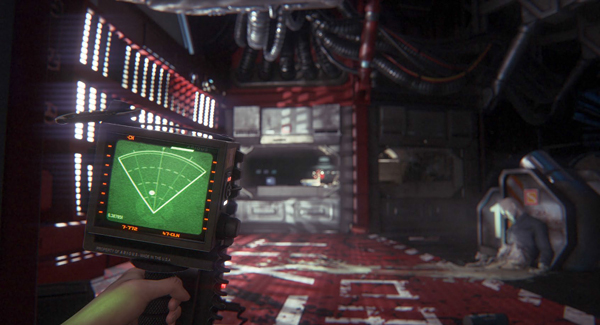 Our hands-on with Isolation came from a segment towards the middle of the game. We had very little idea of where we were narratively with Creative Assembly wanting us to focus on the kind of gameplay they were offering us, not the mystery we would be getting involved with. Much of the story of game remains unknown to us.

We were given a brief synopsis by Dion Lay, narrative designer. It didn’t vary much from what other previews have already revealed but for those who don’t remember – The Sevastapol, a space station owned by a company called Seegson in the process of being decommissioned, is found to be the location of the black box of the Nostromo. A Weyland-Yutani officer called Samuels approaches Amanda Ripley, who in the intervening 15 years had became an engineer under Weyland-Yutani’s employment.

Along with other characters, Amanda Ripley, heads to Sevastapol on the Weyland-Yutani ship the Torrens (Conrad reference for you there!). They find the station completely void of life. They’re unable to communicate with the station and in order to get onboard the crew perform an EVA. Something goes wrong and Ripley becomes separated from the rest of the crew. The story seems to focus around the mystery of the Sevastapol and the Alien’s presence aboard it. As has been previously mentioned, the story was written by Dan Abnett, a writer known for his work with Marvel and on the Warhammer universe.

Dion and Jude Bond (lead artist) also talked a little about what they hoped to accomplish with their character design. Much like Ridley Scott’s Alien felt lived in, Creative Assembly wanted to replicate that sense and feeling with Isolation. The crew are all working class and their designs provide that sense of the weary and tired crew of the future.

Jude showed the level of detail that they had managed to attain for their human characters. He explained that Creative Assembly had discovered a company in Sheffield, England that specialized in using multi-camera rigs to take multiple photos of a face and to construct a photo realistic 3d image. Creative Assembly were then able to convert that image into an in-game asset that retained near photo realistic levels of detail.

Due to the relative ease of creating detailed models this way, Creative Assembly had all their staff provide their likeness for the extra characters in the game. It is their hope to have a completely unique line-up of character models, a hope they’re on their way to achieving. 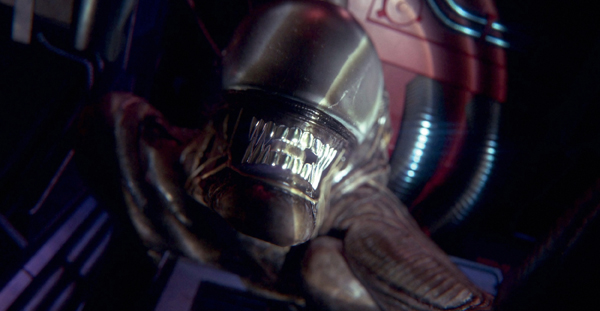 I’m going to talk more about Creative Assembly’s Alien later on in the preview but during this section of the tour Jude took the time to show us the Alien model that the team had created. Whilst it is not exactly a 100% replica of H.R Giger’s Alien, it’s an immensely detailed model that looked fantastic up close.

Prior to this I’d only had fleeting images of the Alien as it stalked me in the darkness or the released screenshots. Yes, they changed its legs but seeing it up close, I was able to see the biomechanical aspects of its design and it was lovely to see those plugs and bolts integrated into the creature.

Jon McKellan (Lead UI Designer) and Jon Court (Senior Producer) talked us through their design ethic and what they had hoped to achieve. In imaging the world that Alien Isolation would be set in, they decided to try and envision their locations as if Ron Cobb would have. Even in the conceptual phase, much of the artwork was done in a way that looks very reminiscence of Ron Cobb’s original artwork for Alien and I think that shows in the images we have already seen.

Creative Assembly have been trying to conceive a functional world, taking background elements in the film such as the various Cobb decals and bring those to the forefront as something to read and recognize. The intention is that players will recognize logos and use those to navigate around the station.

Using a style that Creative Assembly is dubbing low-fi sci-fi, the design team decided to construct their world and the items within that world with materials that would have been available prior to 1979. This was to retain the kit bashed appearance of Alien. According to McKellan that provided the team with some challenges. One particular example McKellan gave was in envisioning how a hacking tool would look designed with technology in a time before hacking was a concept people were familiar with.