Corporal Hicks: Now for the question. I’m sure you were expecting it. The legs… because everybody wanted it asked. With places like us, as fans, we are going to nit-pick and so far the only thing that seems to have really made people ask “why” is the legs?

Al Hope: So this is really interesting because we had that conversation over many months as we actually prototyped almost every type of leg imaginable. We initially did go “right, okay, we’re making a game based on Alien so it’s going to be the original alien and we’re going to recreate that“. What we found out very early on was that it looked like what it is which is a man in a rubber suit.

It was so beautifully shot and absolutely immaculately edited in that first film. You don’t actually see very much and what you perceive is really really powerful but when you look at the first alien, full-length, it is a guy in a suit because it was a guy in a suit and so our first alien was that and it was fine but it just did look like a man. It looked humanoid to the point that if he was running at you, it would look like a guy running.

We needed the creature to be very fluid in its movement, very capable in its movement and able to manoeuvre over objects and the world very rapidly and very seamlessly. When we tried with the humanoid legs, it looked like a guy doing parkour. It was a guy crawling over a space whereas the power of the alien is this otherness, this mystery. It’s quite an unpleasant quality to it that we weren’t getting with the straight reproduction of that first alien. 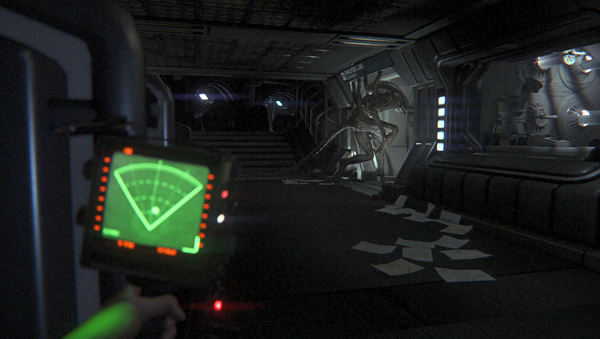 Jon McKellan: We’ve got to do things you haven’t seen in the film – like go in and out a vent – you don’t see the alien doing that. We’ve got to see that. The player might be able to glimpse that happening and we’ve got this humanoid sort of thing, jumping up to a vent and pulling himself in. It just doesn’t feel right. It doesn’t look right and having the configuration we’ve got now frees us up in terms of animation and style. Having to drop out of a vent and landing on the floor looks very different when it’s a humanoid doing that compared to what we’ve got now. It’s given us some freedom to really play around with how we can move and do some really nice stuff that way.

Al Hope: Our intention from the start was we create that first alien but it just became a massive distraction. You weren’t thinking that’s an alien, you’re thinking that’s a guy and so it’s a compromise that we thought we’d done it for the right reasons.

Corporal Hicks: So earlier on the tour, you spoke about using only technology that had been available at the time the film was made so you’re building this new game, this new world and new corporations in the future. How did that limitation affect you when you were designing and building?

Jon McKellan: It’s been a really interesting process for me and for the team just trying to steer in a different direction from the route you would normally go.  Like I said in the tour – Something like the hacking game. Any other sci-fi game would do some crazy, 3d holographic interface that you would connect to your brain or something. Something really extravagant and a lot of films, they make interfaces a lot more complex than they actually should be and some people who are in the know look at it and think “that’s silly“.

It would never work like that but the whole purpose of it is to look more complicated so that the users think they’re going to cover those characters. We’ve got the thing where we’re going to have a simple time where technology was much simpler and try to play with that complication, play on the simplicity. What the most primitive hand tool would look like?How do you hack something? The concept of hacking wasn’t really a thing back then. Trying to introduce that is actually really difficult but it’s allowed us – especially the 1979 cut off point – allowed us to explore areas we wouldn’t have normally looked at in the past. 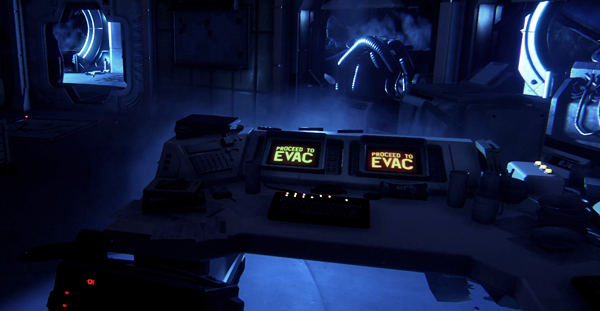 The war radios, the first ever portable TV prototypes… and even just down to the blockiness and the bold colours of the actual screen interfaces that you’re getting and you don’t have 60 million colours to play with, you’ve got 6 and there’s nothing and what does that do the UI? What does that do to messaging? How do you use that? It’s a real limitation but in another sense, it totally frees you in a different direction that you wouldn’t normally get to.

Al Hope: It’s really good. We’re dealing with the future but it’s absolutely baked in the past so it starts to melt your brain as you start to think about what. We obviously need to expand the world and the universe because we need to create spaces that felt like Alien that weren’t in the film. But where do you draw your reference from? If you don’t have any rules, then it’s really challenging. So actually putting in that kind of hard stock on any of the technology or any reference after 1979, it was actually really liberating.

Dachande: You’ve obviously got the main alien there. Is there going to be any other forms of the life cycle like facehuggers or eggs or will it just be the main alien?

Al Hope: I think what we were trying to achieve when we started was really what’s it like to encounter Ridley Scott’s Alien. Something that was really imposing and massive and really terrifies the player. I think that was the main focus and push for what we were trying to create because it felt like games in the past had always focussed on the aliens that James Cameron had. The many or the one against the horde of aliens. It felt like this was a opportunity to do something completely different and it really felt like there had to be an alternative interaction for the player instead of just being at the end of your pulse rifle and what would that be like.

Before we had anything on screen, I remember talking to the guys saying, “we’ve got Ridley Scott’s alien in the studio, what are you going to do?” And they said, “crouch beneath my desk and I’m going to stay quiet and make sure he can’t see me“. Okay right, “you need to get to the fire exit, it’s over there, how are you going to do that?” “Watch where he goes and I’m going to try and move…” and you know, it was that kind of initial seed of an idea, it felt like we’ve got something, that single encounter, it could be really special and different and a new experience.

Corporal Hicks: So the main focus is on Big Chap then?

Corporal Hicks: Will we see egg morphing at all? The scene from the director’s cut where they find Dallas all gooed up. Is there anything quite like that?

Al Hope: I don’t think we’re really talking about the wider game too much today…