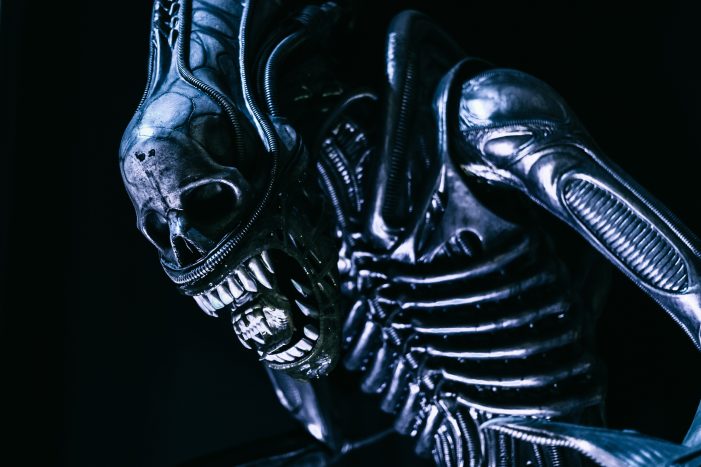 Back in Halloween season of 2021, while visiting Los Angeles, I was invited along with longtime AvP Galaxy collaborator ‘Mike’s Monsters‘ to tour a new exhibition in Hollywood – a showcase of movie monsters and memorabilia called ‘Icons of Darkness.’ I had actually been following this exhibition since fall of 2020, as it was on the verge of opening for the Halloween season then but was delayed until September of the following year.

The exhibition showcases the private collection of Producer, Director, Writer, and Actor Rich Correll, who was good friends with special effects artist extraordinaire Stan Winston. From a young age, Correll noticed that many special effects prosthetics and costumes were discarded by productions after use, and took it upon himself to preserve and collect pieces of sci-fi, fantasy, and horror film history.

After first discovering this exhibition online, and seeing that there would be a number of Alien, Predator, and AvP pieces included in the display, as well as from a number of other franchises I enjoy, I knew it would be something I’d love to check out, and I was not disappointed.

Featured prominently in the entrance was an Alien vs. Predator display that I recognized. This impressive life-sized piece is by Pat Magee of Magee FX, previously on display at the Burbank / Pasadena ‘Monsterpalooza‘ convention.

When we arrived we were greeted by General Manager Justin Cotterell & Assistant Manager Pat Evans, who worked tirelessly for weeks to get the exhibition prepared and ready for opening. After some chatting they guided us through black curtains and into the exhibit.

There were all sorts of costumes, props, and monsters on display from a variety of fantastical franchises and genres. After stopping to witness the impressive Jurassic Park section, and continuing through a foreboding hallway of horror, we turned the corner and were greeted by the largest collection of life-sized Aliens and Predators we had ever seen. 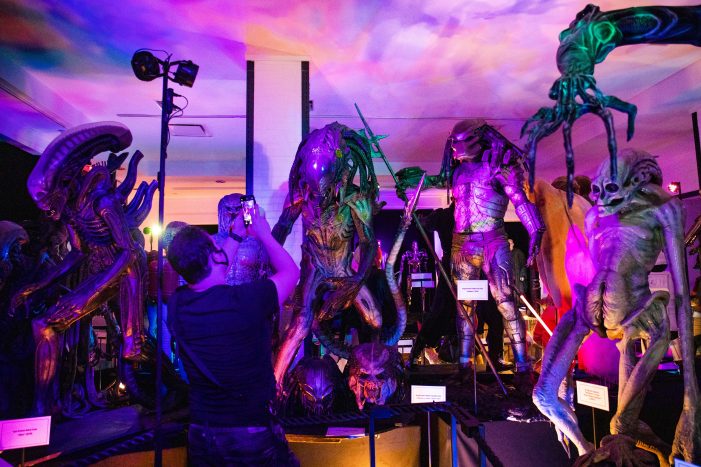 It was a sight to behold. There were so many pieces on display with wild multicolored lighting. Mike and I knew we would be here in this monster wonderland for a while… And just like at our visit of the USC 40th Alien Anniversary Exhibit, we’d be taking plenty of pictures.

Right as I entered, I immediately noticed the life-like prop of Ripley 8, cast in Sigourney Weaver’s likeness and used in the opening sequence of Alien Resurrection. At the base of this was a display of the android Ash, depicted with his white guts spilled out of his body after his head was knocked off. Towering over this entire section was a massive Queen Alien from Aliens. She barely had clearance with the ceiling. 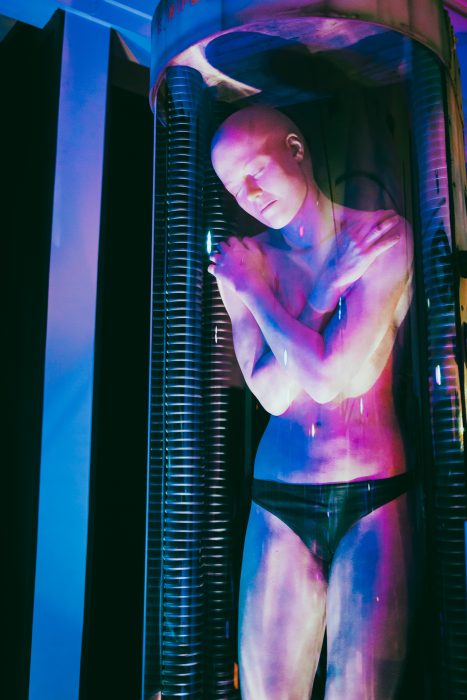 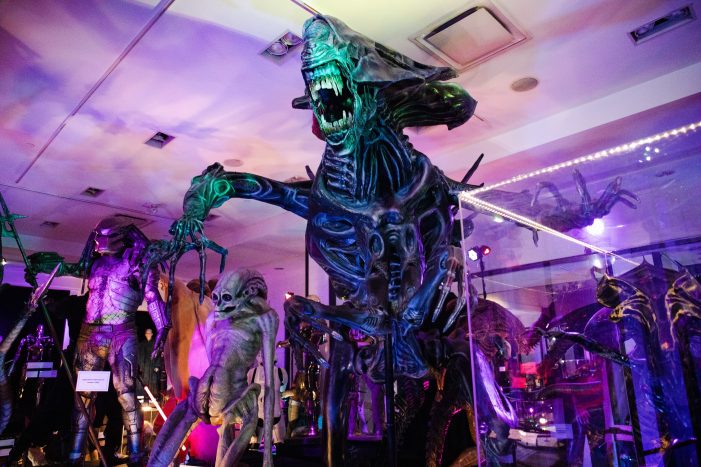 I did recognize a few of these life-sized pieces as reproductions. From what I’ve researched, the Queen was created by Distortions Unlimited using the original molds, one of the ‘Big Chap’ Aliens on display is from Section9 (Only 100 were made in celebration of the film’s 30th Anniversary). Another life-sized Big Chap looms next to Ripley 8, this one by Magee FX, its dome removed and frightening under-skull visage exposed.

Regardless of some of these being replicas, they were still quite impressive. It’s always a treat for fans like us to be in the presence of highly detailed life-sized creations of these monsters. Adjacent to the Queen was a replica of of the Newborn hybrid creature from Alien Resurrection. This looked a bit different than the display piece we checked out within the StudioADI showroom, and I’m not sure of the story behind it. 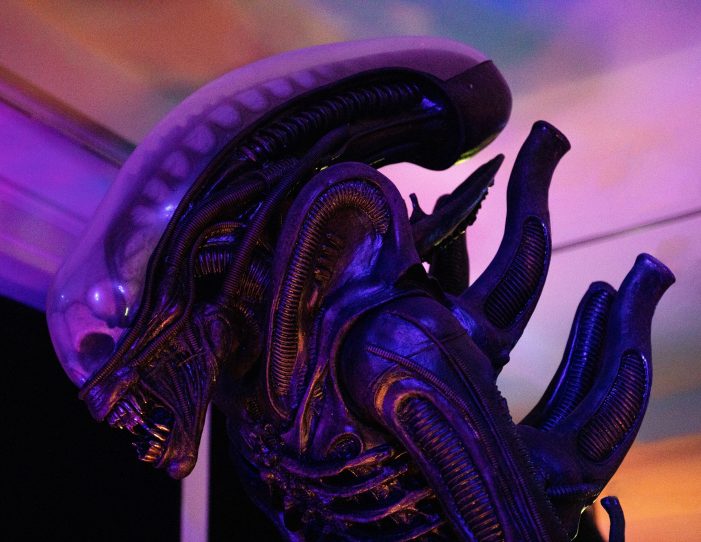 Other pieces were undeniably screen used. Costumes from AvP, AvPR, Alien Resurrection, Predator 2, and Predators stood all around us. The Elder Predator from the second film had the signature wear of old latex from a film shot more than 30 years ago. Created by Stan Winston Studio for the move’s finale, it’s likely this Elder suit was the one previously spotted sold in an auction. This old ‘Grayback’ may be worn, but he was still as handsome as ever. Close to him was the Classic / Crucified Predator from Predators. 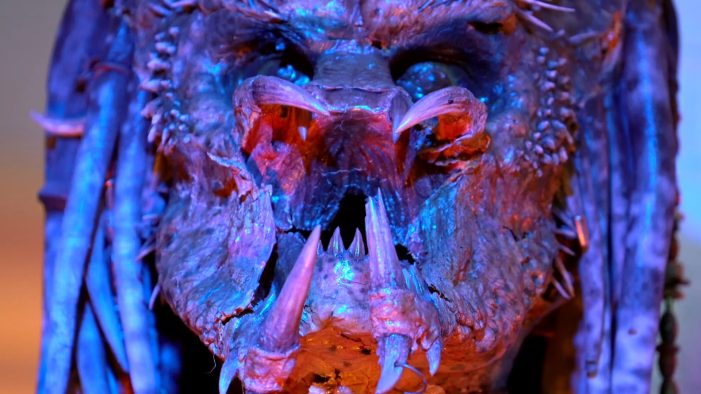 There were also a number of Alien eggs and facehugger props. These were some of the many eggs that nested within the Xenomorph hive of Aliens. One particularly impressive piece was Stan Winston’s Queen Alien maquette, one of the few items in this section protected within a display box.

A small nitpick, I would’ve liked to have seen a bit more history included on the labeling of these props. Granted, this is coming from us wild fans wanting to know everything. There were also three Alien Resurrection style warriors,  one of which I believe may have been from AvP. 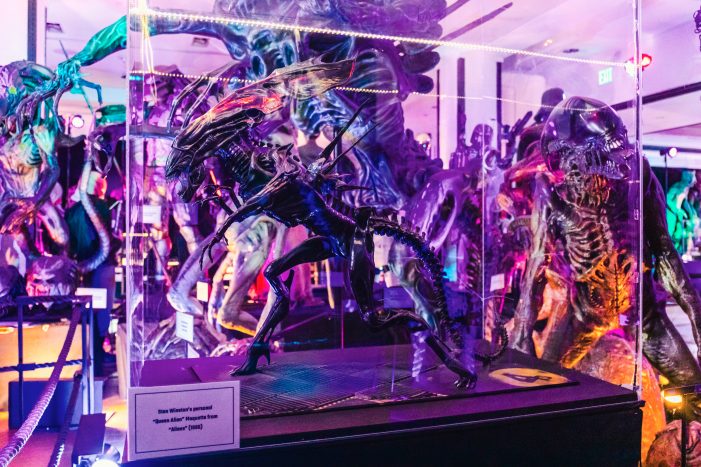 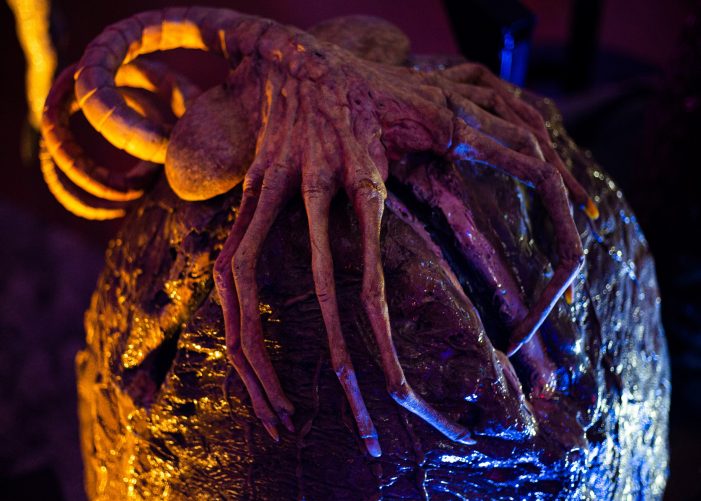 On the opposite wall were four Predators prominently featured: Celtic, Tracker, Jungle Hunter, and Scar. Beside them was Wolf holding his Razor Whip and an AvPR Xenomorph Warrior. Curiously, Wolf was labeled as the “Bullwhip Predator.” These were all just awesome to behold. I believe the Jungle Hunter is also a replica by Magee Effects.

The Scar and Celtic suits by effects workshop StudioADI in particular are quite imposing, and seeing an actual prop of my favorite Xenomorph design was a real treat. I had not seen a life sized AvPR Warrior since they attacked me during Halloween Horror Nights in 2014/2015. The Tracker Predator, designed by KNB EFX Group, stood posed on a platform behind them. Tracker had some fantastic detail in both his green shaded armor and osteoderm-like patterns of his skin. 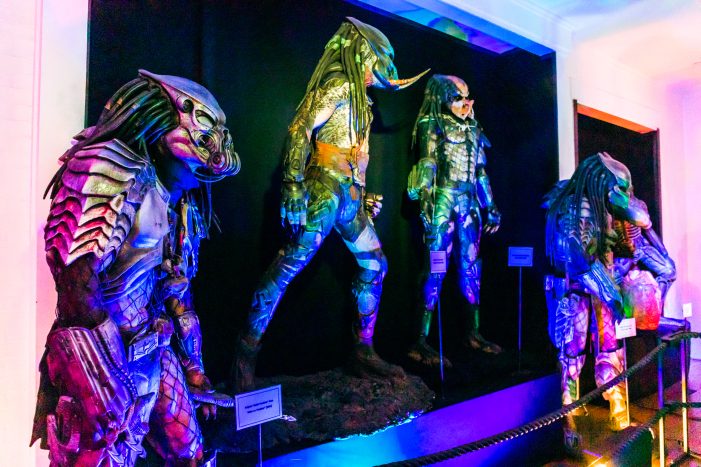 ‘Chet,’ the Predalien from AvPR, was another impressive display. I noticed some yellow circular wounds on its head and body, making me think of the scene where Dallas uses an assault rifle to unload on the monster in the film. They were the same wounds I noticed on one of the two stunt Predaliens I saw in the StudioADI workshop. Was this the very same one? 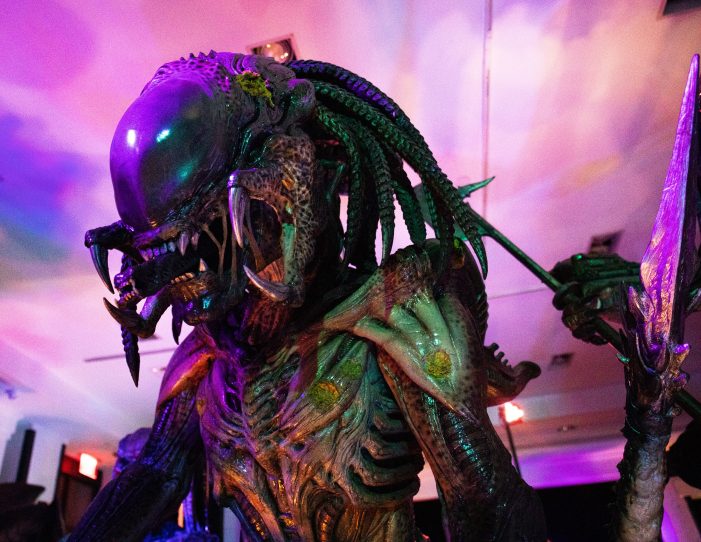 Not everything on display remained completely still though… an Alien jump scare is waiting for unsuspecting tourists passing through:

Spoiler (click to show/hide)
Within a glass case is a facehugger that shoots forward via a pressure system, right as guests admire its detail. 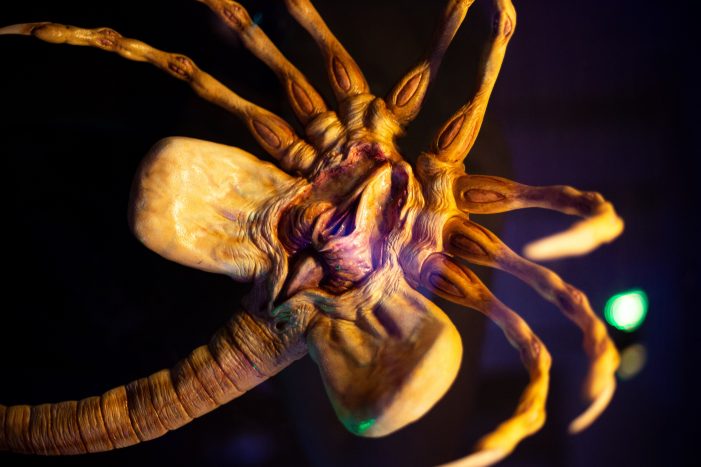 All in all, Icons of Darkness is an incredible visit for any fans of Aliens & Predators looking to see them physically towering over you in their life-sized glory. There’s a good chance you’ll find plenty of other memorabilia of interest as well. Rich Correll’s immense passion for the movies, with these genres and franchises in particular has resulted in a phenomenal display of film treasures for visitors to enjoy. We highly recommend taking a tour of this collection and expect it to become a must-visit tourist spot in Hollywood.

Mike and I took a lot of pictures, so if you’d like to check out all of them out, click the link below for the gallery.

We also put together a video showcasing the exhibit which you can check out below. Thanks goes to Mike for providing a significant part of the footage used.

We’d like to give a massive thanks to Pat and Justin with Icons of Darkness for facilitating our tour. This article was completed way later than we had planned, but this experience was awesome so we’re glad we can finally share it with you.

Check out the Icons of Darkness website if you’d like to plan a visit. Tickets are currently available through the beginning of May but the exhibition is planning to move to a permanent location near the current one which will feature even more of Correll’s collection. You can also follow Icons of Darkness on Facebook, Twitter, and Instagram. Of note: the tours are guided with a small group in the current location.

Mike was able to revisit the exhibition a bit later by himself, and managed to capture another full sized Xenomorph in storage: a stunning ‘Big Chap’ that wasn’t on display during our original visit…

If you’d like to see more of the exhibit beyond their Alien & Predator selections, Mike released a full tour video on his ‘Mike’s Monsters’ YouTube channel.

We can’t wait to return and see what else the folks at Icons of Darkness have lurking in the shadows of Correll’s collection, waiting to terrify guests at the expanded location.

Until then, This has been RidgeTop, signing off.