If you search the forums on this site you’ll find several discussions about ‘AvP’ Lego and it’s unfortunate that Fox and Lego have never entered into any licencing partnership agreement to produce such merchandise. Nonetheless, the very infinite potential nature of Lego can partially satisfy this goal. While the lack of any official Lego featuring Aliens or Predators is lacking in any availability right now, it’s still very possible to construct your very own 48cm (19 inches) tall Alien Lego model and Alien Project by Arvo Brothers will show you how.

The main content of this 220 page hard cover book comprises of over 200 step by step instructional diagrams of how to assemble almost two thousand specifically selected bricks into a spectacular Alien model along with a tasteful Ron Cobb inspired base to stand it on. The book also features a photographic gallery of the statue and many other photos of the bricks you will need to build it. There’s also an abundance of photos of the model in various stages of construction. 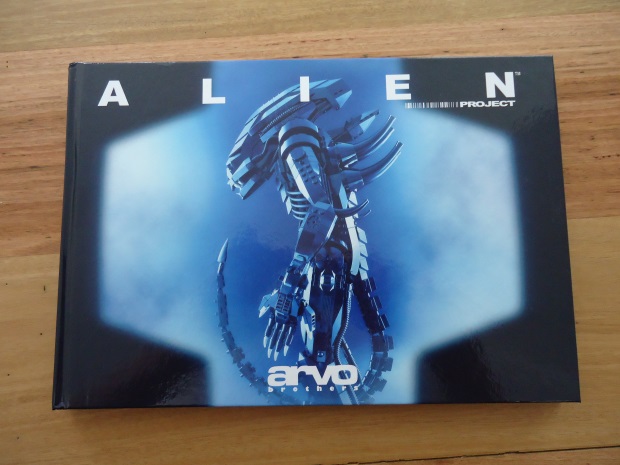 The light introduction details the authors’, Ramon Alfaro Marcilla and Amador Alfaro Marcilla experiences with H. R. Giger’s work. It turns out that Giger’s creature designs for ‘ALIEN’ were not their sole influence but they were also largely admired the old and largely obscure 1992 Cyberdreams’ video game ‘DarkSeed’ which was based on H.R Giger’s work as well. The introduction outlines how exposure to these items of media opened up a much wider interest in H.R Giger’s work for both brothers.

While I haven’t had a chance to build the model as of yet, the book itself is a confidently produced landscape format volume and all the more remarkable for being an unofficial product of unlicensed content. Neither Lego nor Fox have endorsed the book but their lack of legitimacy does nothing to diminish how impressive this highly specialised volume actually is in it’s own right. It’s an unauthorised tome but totally worth the asking price of around US$28 (plus postage) should you want to purchase a copy of it.

As I mentioned earlier, I haven’t yet built the model but judging from the images present throughout the book it is inspiring and something I fully intend to do at some point in the future. After all, who doesn’t want a fully featured and appropriately proportioned one and a half foot tall, 1/6th scale Lego Alien standing in their collection? Especially one that they built themselves. Yes, that is the ultimate goal this book offers. What I’ve seen of the model itself from the abundant photos contained within the book, the completed model alone would be worthy of review. 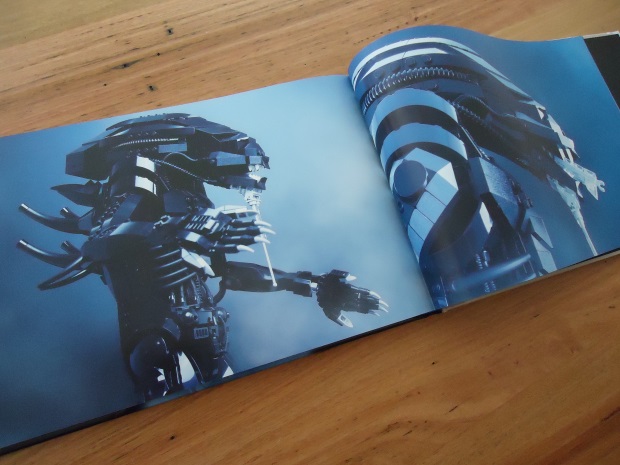 In order to acquire a copy of this book, you will need to approach the authors via email at the following address: arvo@arvobrothers.com. Once your order is received and has been processed, they will email you the list of parts necessary to build the model while you wait for the hardcover book to arrive. You can then prepare early by ordering the parts immediately. By doing things this way, you will presumably have both the book and the necessary bricks to construct the statue when they arrive on your doorstep within mere days of each other.

The parts list and their quantities is also fully documented within the book as well along with very clear illustrations on identifying which piece is needed for any stage of the construction process. The instructions are clear and very detailed. I have corresponded with Arvo Brothers several times during the past month or so and found them quick to respond to any of my questions or enquiries. This included very swift responses regarding purchasing of the book itself. Great service from them all around and they deserve praise in this regard. 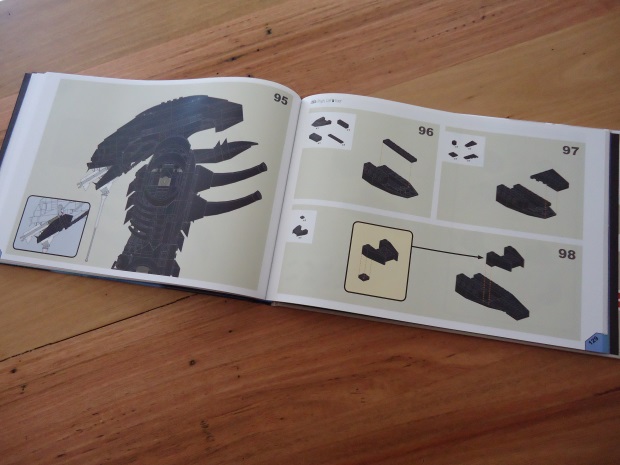 I was very surprised at the overall quality of the book. The design is clean and stylish with over 200 pages of step by step illustrations and photos guiding and inspiring someone enthusiastic enough to build their own Lego Alien from beginning to completion. It’s comprehensive in achieving this single goal with all the instructions and details you could possibly need. Even if you have no intention of building a Lego Alien and you want to add a unique book to your library or want to gift a copy to someone who thinks they probably own everything under the Sun related to the ‘ALIEN’ movies, then this book is an ideal choice.

An absolutely amazing piece of work for an independent publication. It’s only failing is it doesn’t come with the necessary bricks that are needed to build the figure itself. You’ll have to order those separately. That doesn’t affect it’s unfaltering attention to detail in order to fulfil the single focussed goal it wonderfully sets out to achieve.

More of the Arvo Brothers Lego work, including a very neatly designed chestburster, can be seen on their website Gallery at arvobrothers.com