I think everybody has heard about the ambitious fan project, Alien Planet, by now. Writer, Anil Kunnel, wrote a script for Alien 5 and for the past few months, they’ve been visualising the screenplay through the use of storyboards on their blog. The intention is to get Fox’s support. Anyway, AvPGalaxy reader, John Nicholson, has written a review of the script for the site. 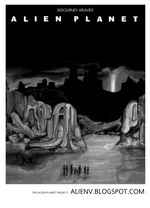 One of the things that make the Alien Saga so unique is how each chapter is approached in a differing way. From Ridley Scott’s art house horror to James Cameron’s Vietnam in space to the beautiful albeit daring vision of Alien 3, these films evoke within them a sense of mystery and intrigue that leaves fans begging for more.

The sad thing about the series where it stands at the moment is it just all feels so unfinished. The main arguments being that the creature has had too much exposure to be frightening anymore and the apparent disinterest of Sigourney Weaver. But just how true is this really? Yes we have seen the creature so many times now but we still know so little about them. What is their origin? Where is there homeworld? Do they even have a homeworld and just what is the relation to the Space Jockeys if any? These are just some of the questions answered in an ambitious script by Anil Kunnell, a talented young writer who believes the journey of Ripley is just as important as the acid-blooded creatures themselves.

Set some years after Resurrection, we find Ripley joining the crew of the USS Vassus, a ship that doesn’t so much have a crew but a whole community and an environment that is in complete contrast to the Nostromo of all those years ago.

Kunnel’s writing sets an almost romantic, relaxed tone for the first act of the script, with the Vassus populated with likeable characters yet Ripley, who in a touching nod to Aliens, protects herself under the pseudonym Amanda McClaren and keeps her distance. Others do try to talk to her, none more so than her roommate Marson, but she cannot break through the barriers Ripley has put up around herself, yet another crewmember named Brandon Nigel, holds a secret that could rupture Ripley to the core. 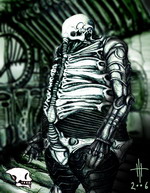 These character elements take their time to set themselves up and the tone of the film here would be very slow, much like the first Alien though I found myself thinking about Solaris, especially with Ripley being constantly seduced by the alien planet the Vassus is in orbit around. It has an almost hypnotic quality about it, which seems to intrigue and feed the alien presence within her body.

About a third of the way through the script, the action steps up a notch and due to unforeseen and mysterious circumstances not to mention an impressive action sequence, we end up on the surface of the planet itself and this is what the fans have been waiting so long for.

Imagine a whole world designed by Giger with its organic, pseudo-sexual look combined with the abnormal and awkward looking bone-like structures, protrusions from the ground, lakes filled with unknown liquids and all this banked in thick blankets of fog. This is what science fiction is all about and this type of imagery combined with 21st century graphical technology could create something really spectacular and give the audience something not seen since the original Alien film. The potential here is limitless.

Inevitably it’s not long until the aliens themselves emerge from various hiding places and we get a chance to see them for the first time in their natural habitat.

Kunnel tries to convey that his vision of the alien is perhaps more aggressive than previous incarnations, here rival alien tribes are fighting each other, destroying each other willingly and even largely ignore the humans, certainly a far cry from the curious, cautious and intelligent creature that was Ridley Scott’s alien. This new found aggressiveness is perhaps arguably due to the aliens being on their supposed homeworld, where dominance and territory are paramount, however, this vicious new approach to the creature is perhaps not what a majority of the fans would expect or indeed welcome without further explanation. 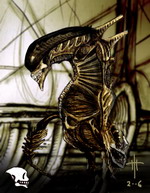 Kunnel also introduces different types of aliens never seen before, including the infamous King aliens and flying aliens amongst others, it is all out war. The pace then slows right down for the final act but there is no shortage of suspense as the survivors get picked off one by one and find themselves being stalked by a lone alien building up to an exciting and unsuspected climax.

Overall then this is highly ambitious, very different and perhaps both the jump-start and perfect resolution for the franchise. Visually it is spectacular and the writing is solid. The characters are easy to bond with and it is worth noting there are no guns in this movie, something many fans upon reading this may feel disappointed about, yet they are not needed here and they are certainly not missed. The character of Ripley is well done, identifiable from that of Alien Resurrection and her journey finally goes full circle, giving her the fitting closure she needs. However, I would like to have seen more of her internal human vs. alien struggle. In Resurrection whilst onboard the Auriga, she seemed to overcome and contain the alien within her but now once she stepped onto the alien homeworld, I intended the battle to resume, with Ripley struggling to hold on to her humanity whilst being consumed by this inhospitable world, yet there is little evidence of this.

The aggressive nature of Kunnel’s alien is another issue; their survival instinct nature is not what many perceive the alien to be and this ties in with the demise of the final alien which could leave some fans scratching their heads in bewilderment.

However, despite these nitpicks, this is a very, very good script and with a little tweaking has the potential to make the franchise truly great once more.