First off I’d like to apologize for the delay in getting this report to you all. As you’ll know Aliens – Infestation came out recently and a lot of my attention has been on content revolving around that game. However, without further ado let’s get onto my report, shall we? I’d just like to preface that this report will be a personal report told entirely from my point of view and how everything happened for me. 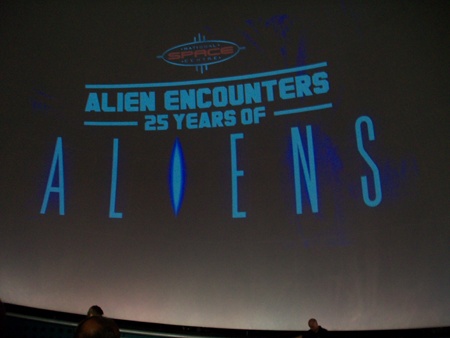 If you’ve been visiting the website at all recently you will be extremely aware of an Aliens convention taking place in the United Kingdom. I certainly hope you were, I was doing as much plugging as I possibly could. The event took place on the 24th and 25th of September at the National Space Centre in Leicester.

It was organized by the extremely dedicated Andrew David Clark, the man behind the Aliens Encounter – Superior Fan Power documentary and Darren Kemp, who we should all know from being the producer, director, writer, actor, etc of the upcoming fanfilm Aliens Epilogue.

There were, of course, many others responsible for the convention. The United Kingdom Colonial Marines acted as convention staff throughout the weekend and Coolwater Productions helped provide the guests. And Andrew had kindly asked me to come down as a guest to talk on the Prometheus speculation panel.

I had intended to try and stay in bed as long as I could, suffice to say I was extremely excited and immensely nervous at the idea of doing the panel and couldn’t sleep. To be completely honest, my mind was all but occupied by the notion of the panel. I hadn’t ever done anything like that before.

I’d never been to an Aliens specific event before. In fact, I don’t think there has been an Aliens-only event since the early 1990s. I’ve done a few Stargate weekends and I’ve been to one Collectormania event so I’m pretty new to the whole convention scene.

I jumped in the car and set off on my hour journey down to the National Space Centre. Outside I met up with Johnny Gore and tinyeyes, two of our X-Box 360 game night players and proceeded onwards only to be met by heavily armed Colonial Marines. I think that was a strong indication we were in the right place. After that we moved off inside. I’d not been to the Space Center so we wandered around, finding ourselves in the midst of the Aliens themed stalls. 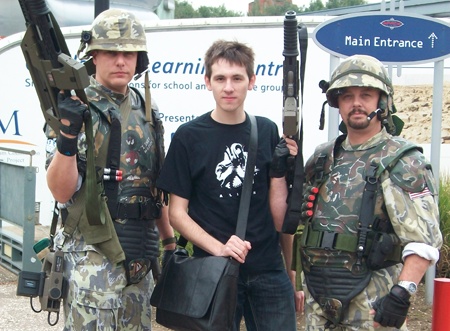 It had the traditional setup I’d expect from the few conventions I’d been to. Tables for autographs, a fantastic artist had a stand for selling his work, there was the Q&A desk and of course, Harry Harris’ amazing collection. Oddly enough we also saw a stand for Aaron Percival from AvPGalaxy & Christian Fowler from Alien Prequel News. To be fair, I never sat there as I was too busy experiencing the convention for myself but I do wish I’d have took a photo.

I didn’t have much time to look around as I had to do the Prometheus panel at 10. I managed to find my way to Darren and ADC who took me to the green room to meet some of the other guests. I found myself introduced to Ian Nathan, Charles de Lauzirika, Christian Fowler, Chrissie Overs and Chris Trice.

Almost immediately Charles was on me, vengeance in his eyes. If you’ve been reading the forum you’ll have seen me mention the banter that ensued during the weekend between Charles and I due to a poorly worded comment in my recent Alien Vault review. That’ll teach me to be more careful during my reviews but it was an absolute pleasure meeting one of the men behind the fantastic DVD and Blu-ray sets that set a standard somewhat too high for the other DVDs I’d ever purchase.

And off Ian, Christian and I went downstairs to the Shuttle Suite to take to the stage. Andrew chaired it and off we went. Thanks for an anonymous contributor there was a number of new photos to display on the projector, the bulk of them being various shots of what we assume to be a Space Jockey. 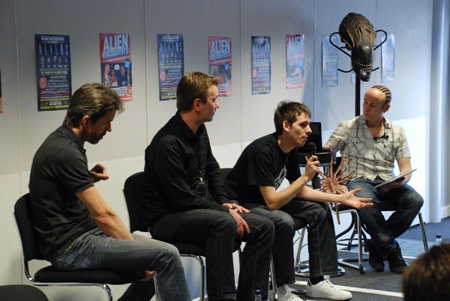 The panel was a speculation board, discussing the various rumors, leaks and what we expected from Prometheus. Thankfully my nerves eased up as we all progressed, flowing between each other and our expectations. We discussed the Egyptian influences, Christian bringing up Eric Van Danikan and the Chariot of the Gods, and the Prometheus myth. We also discussed rating concerns, possibility of a Director’s Cut. The panel flew by before we knew it and it was time for us to step down.

Next up was the Aliens and AvP special effects panel with Chrissie Overs and Chris Trice with Chris chairing it. Chrissie worked on Aliens and AvP and Chris worked on AvP. The discussion panel focused on these specific projects which Chrissie and Chris had worked on which included the molding of the Queen, the foreground miniature during the marines incursion into the hive. She also talked about her task of designing the practical flamethrower and a very amusing story of how the texturing around the gas canister is just wrappers off Mr Kipling’s cakes.

During this first session Chris talked about the debate regarding CGI vs practical effects which is always an interesting discussion. He talked more about his part in the franchise on the second day.

Then it was time for Charles De Lauzirika’s panel on the Aliens Anthology, this one being chaired by Ian Nathan. As someone who isn’t often seen, despite his enormous contributions to the franchise, it was really interesting to see him up on stage talking. The issue of Alien 3 was brought up. We all know how much Fincher hates his participation in the film and Charles talked about trying to get him involved in the Quadrilogy and Anthology sets.

Charles spoke of having to chase Fincher down, eventually getting a fellow filmmaker to get Fincher to give Charles a ring, leaving a message which consisted of “Err…Hi, this is David Fincher…I was asked to give you a call about Alien 3….so….yeah….” 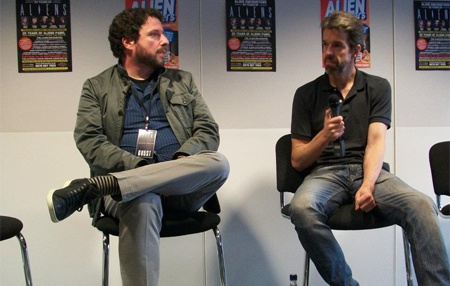 From left to right: Charles De Lauzirika & Ian Nathan. Photo by me.

The Assembly Cut had taken them around 9 months (if I’m remembering rightly) of work to complete but unfortunately there wasn’t budget to ADR some of the poorer quality dialog the first time round. However, this was able to be done for the Anthology release.

Charles also talked about how he started in the business. He had actually been talking to Ridley Scott and recommended to Scott he should do this “DVD thing”, Scott in turn asked him to handle it. This was all regarding a specific film but I can’t remember which. This set Charles off on the course that has led to him being a well known name in the DVD/Blu-ray industry. For those that aren’t aware yet, Charles is also working on the Prometheus set but he was unable to talk about it, unfortunately.

Questions were posed to the floor, most of them being asked by me and Ian labeling me a “trouble-maker” due to this and one question I asked. Now I remembered a report that came out around the time of the Anthology set in which Jean-Pierre Jeunet was reported as claiming he had no involvement in the Anthology set. I asked Charles about this and he said that it wasn’t true, that Junet had been involved. I’ll try and find the link to that report to hopefully back me up. But as I told Charles, “I’ll just shut my mouth then”. 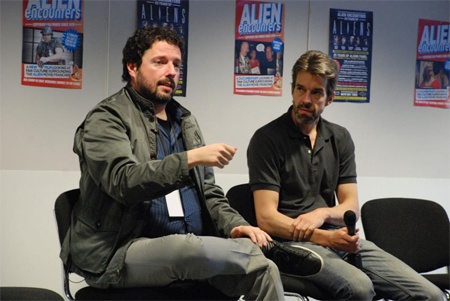 Charles did talk about some of the issues he had regarding meeting the cast and crew from France during his work on the Alien Resurrection segments. His assistant would schedule interviews in Paris and then several hours later he’d be expected to be back in the UK for someone else. Apparently his assistant didn’t realise the travel time.

I also asked about what sort of freedom Charles has on the sets of the films he is covering. He spoke about taking the “fly-on-the-wall” approach to his documentaries, trying to get the crew to forget he is even there. Charles felt that was when you got the honest moments but that it was also vital to be respectful with the footage you get.

Ian Nathan had also touched on Charles’ new film, Crave, and Charles explained that he would like to continue making films and how he still dabbled his hands in the behind-the-scenes stuff for his own feature.

I really enjoyed listening to his talk and would love to see him talk more about his involvement in the franchise. It was wonderful to see the passion and love that fuels the man that has helped put out the best home releases for this franchise