The Claymore Mines are another new Predator weapon that we see in 2007’s AvP Requiem movie. When the Wolf Predator first enters the sewers, he deploys many mines to trap the xenomorphs. They stick to the concrete tunnels awaiting activation.

The Wolf Predator is able to see all the mines on one of his vision modes. The red dots indicate the placement of each mine.

When the mines are activated, lethal red lasers emerge covering the tunnel. Wolf managed to kill two xenomorphs using them and it tore straight through their bodies, shredding them to bits.

Concept art from Chris Howe showed the mines having extendable screws that burrowed into the target surface. 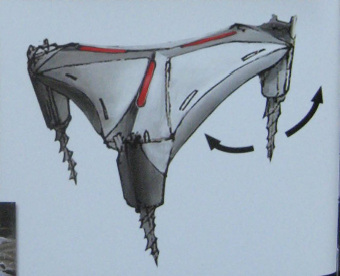